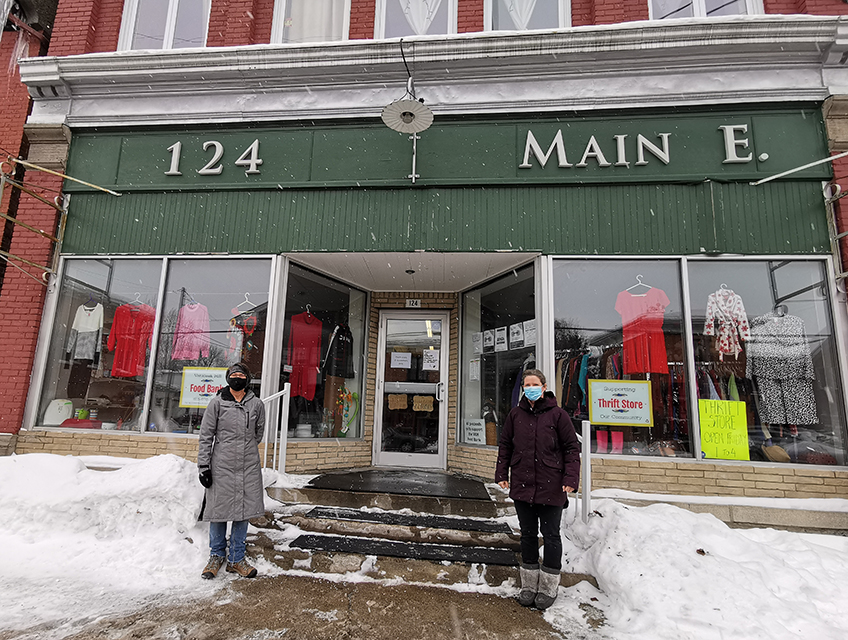 At left, Jane Fantie is the coordinator of the Vankleek Hill Food Bank and at right is Eleanor Gardner, who has taken over management of the Thrift Shop, just in time for its move to new premises at 124 Main Street in Vankleek Hill. Now, the thrift shop and the actual food bank are located in one place and volunteers are working hard to make the most of more space. Photo: Louise Sproule

The Vankleek Hill Food Bank was rapidly outgrowing its rent-free space at Knox Presbyterian Church, says Jane Fantie, part of a small volunteer team which operates the food bank and the thrift shop, which are part of the not-for-profit Community Assistance Fund Enterprise (CAFE). And more space to sell secondhand clothing and expand to small houseware items is a much-needed change, she added, so that more clothing can be sold and more funds raised to support the food bank. CAFE had already been paying rent, she notes, but the small increase in rent is something that she feels will be more than covered by increased sales in the thrift shop, which is now managed by volunteer Eleanor Gardner.

Taking over the equivalent of eight offices, with the space at the front of 124 Main used for the thrift store, is a big move toward visibility and the notion that the food bank is there to help everyone in the community. Fantie points out that many are struggling during this time, from seniors to those with paying jobs. At this time, the Vankleek Hill Food Bank is serving almost three times the number of clients compared to last year.

COVID-19 has posed some challenges for the food bank and the thrift shop. Fantie explains that food baskets are prepared and set aside for 48 hours before they are picked up by clients. Likewise, the thrift shop has reduced what it accepts in the way of secondhand items and at the time of writing, the thrift shop was hoping to announce soon that it would be accepting clothing and houseware donations, although a limit per household will likely be in place for some time.

People have been cleaning and sorting during the pandemic and most certainly during the lockdown, she says. They don’t want to be overwhelmed all at once with more donations than they can reasonably handle. And in this instance too, a holding area will be created for donations once they start coming in. Fantie says volunteers are working closely with the municipal bylaw department to make sure that all health protocols are followed, including limits on the number of persons permitted for in-store shopping.

Support for the food bank from the local community and from United Way Prescott-Russell, Second Harvest, Prescott-Russell Community Services and the Hawkesbury Rotary Club has been amazing, Fantie says.

During what she describes as a terrible time, community support has been beyond awesome, mentioning generous support from Richard Kerr at Harmony Gardens, which has been providing potatoes, squash and so much more to the food bank.

She relates a story of how the food bank shelves were almost empty by December 20, 2020 — after the preparation of about 100 Christmas baskets to meet the increased demand, there was little left but Fantie recalls that she and her husband, Mike McGurk, thought that it was perhaps for the best as the food bank was going to be moving and this meant there would be little to move to the new location.

“But between December 20 and January 1, the amount of food we received filled the shelves four times over. From local schools, the Vankleek Hill Cougars, Vankleek Hill Foodland and Hawkesbury OPP and ladies making masks and others donating food – it was simply incredible,” Fantie recalls, saying that it was an emotional time because of the community outpouring of support. An example of local support is Hélène Lefebvre, who has been making and selling cloth masks since last year, donating all revenues to the Vankleek Hill Food Bank. Last month, she surpassed $10,000 donated to the food bank.

While emphasizing overwhelming support, the other point Fantie drives home is the need to de-stigmatize food banks. A dollar does not go as far as it should, she points out and statistics show that about 60 per cent of those who use the food bank have paying jobs.

“We are here for everybody. Sometimes, people need a hand. No one should be shy to call us,” she says, adding that eliminating barriers is one of the reasons the food bank has beefed up its presence on Facebook and created an Instagram account.

“People can call us at 613-678-8119 or send us a message via @vkhfoodbank on either Instagram or Facebook,” she says, realizing that some may be shy to make that phone call to ask for help.

And so, if you have clothing or housewares to donate, you may have to wait a bit longer. But if you want to donate money, you can send it via e-transfer to: [email protected] where it will reach treasurer Carol Hall.

The thrift shop is currently open Mondays and Fridays from 1 p.m. to 4 p.m. and note: there is an in-store shopper limit so you might have to wait outside (dress accordingly).