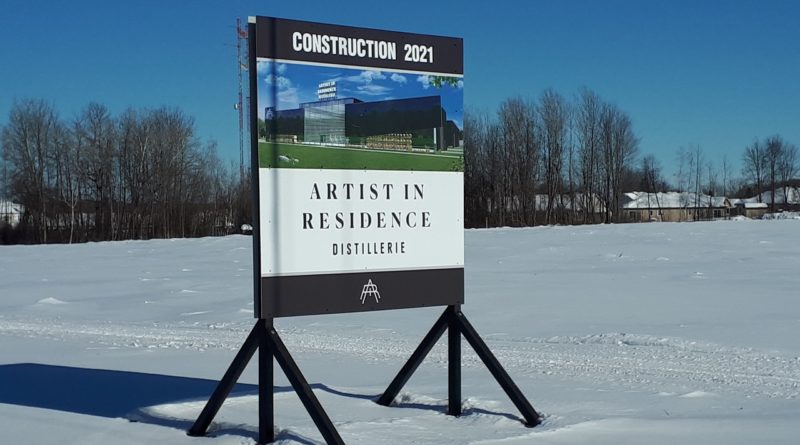 Plans for the new AIR Distillerie at this location on Tupper Street have been delayed. Photo: James Morgan

Progress has been impaired on a plan for a new distillery on Tupper Street in Hawkesbury.

In September 2020, Artist in Residence (AIR) Distillerie of Gatineau announced plans to expand and build a new small-batch distillery and restaurant on 14.8 acres of land near the intersection with Tessier Street.  Founder and CEO Pierre Mantha was hoping to have the new facility in operation by May or June of 2021, but that will not be happening.

Mantha said it is taking more time than originally expected to develop a proper site plan for the distillery property.  Before an industry can receive a construction permit from a municipality, it must develop a plan including things such as the size of the buildings to be constructed, setbacks from property lines and neighbouring developments, traffic management, and storm water drainage.

Mantha is hoping to have the site plan completed and deposited with the Town of Hawkesbury by the end of February and anticipates it could take another three months before the plan is fully finalized and approved by town council.  He estimated that the earliest construction could start in July or August, or September, which he called the “worst scenario.”

“Everything got delayed,” said Mantha.

He noted there are also logistical issues in having distilling equipment being purchased from Europe and transported by ship to Montréal, and then carried by truck to the site in Hawkesbury.  Mantha is hoping to have the building sufficiently completed so that the equipment can be stored inside safely and out of the elements.

Mantha admitted that his initial schedule for construction, completion, and production of the new AIR Distillerie was over-ambitious, but he understands and respects the amount of time involved to properly start the project.  He is now hoping the distillery will be up and running in September 2022.

COVID-19 cases climb across EOHU, region at risk of returning to red zone

Renew, Refresh and Revive with the Champlain Library