Contributing to the community comes easy for Jim Hocquard of Grenville 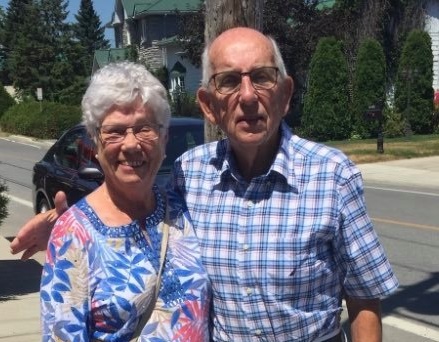 Jim Hocquard of Grenville is a man of the community.  He has called the village home since 1972 when he arrived there as the manager of the former Bank of Nova Scotia branch.  In 1982, he left banking and became the owner of an insurance brokerage in Vankleek Hill.

Hocquard’s first major community project was with the village of Grenville’s centennial celebrations in 1976.

At 84, Hocquard is still actively involved with the Hawkesbury Rotary Club.  Last spring, when most senior citizens were staying home due to the arrival of the pandemic, he was bravely helping deliver meals that the club was providing to people who were unable to go out and shop for food.  He has also been a volunteer for school breakfast programs.

At a time when service clubs in many communities are struggling, Hocquard said that the Hawkesbury Rotary Club, which he joined in 1977, is still active and strong.

“I think we’re just as active today as we were 30 years ago.”

“I play a lot of golf, and I walk,” Hocquard said, about his recreational activities.

In the winter months, Hocquard normally curls at the Brownsburg Curling Club, but it has not opened this season due to the pandemic.

Before Christmas in 2020, Hocquard got to work and built a nativity scene that was displayed in the front yard of Knox-Wesley United Church.  The black, silhouette figures were prominently visible when surrounding floodlights came on at night.  Hocquard is planning to add to the nativity scene for next Christmas.

When asked why community involvement is so important to him, Hocquard said “I’ve been like that all my life.”  He is originally from Paspébiac on the southern part of the Gaspé coast and went to school in nearby New Carlisle, which is the hometown of his wife Gail (née Briard).  The couple raised two daughters, Suzanne Hocquard, and Kim Welden.

“It’s just part of me, I guess,” was how Hocquard described nearly 50 years of commitment to community organizations and activities.

“I like doing it and I don’t mind giving up my time.”

There are no signs that Jim Hocquard will be slowing down his community involvement anytime soon.