Local material sent for recycling up significantly; residents can help by sorting their paper and plastic 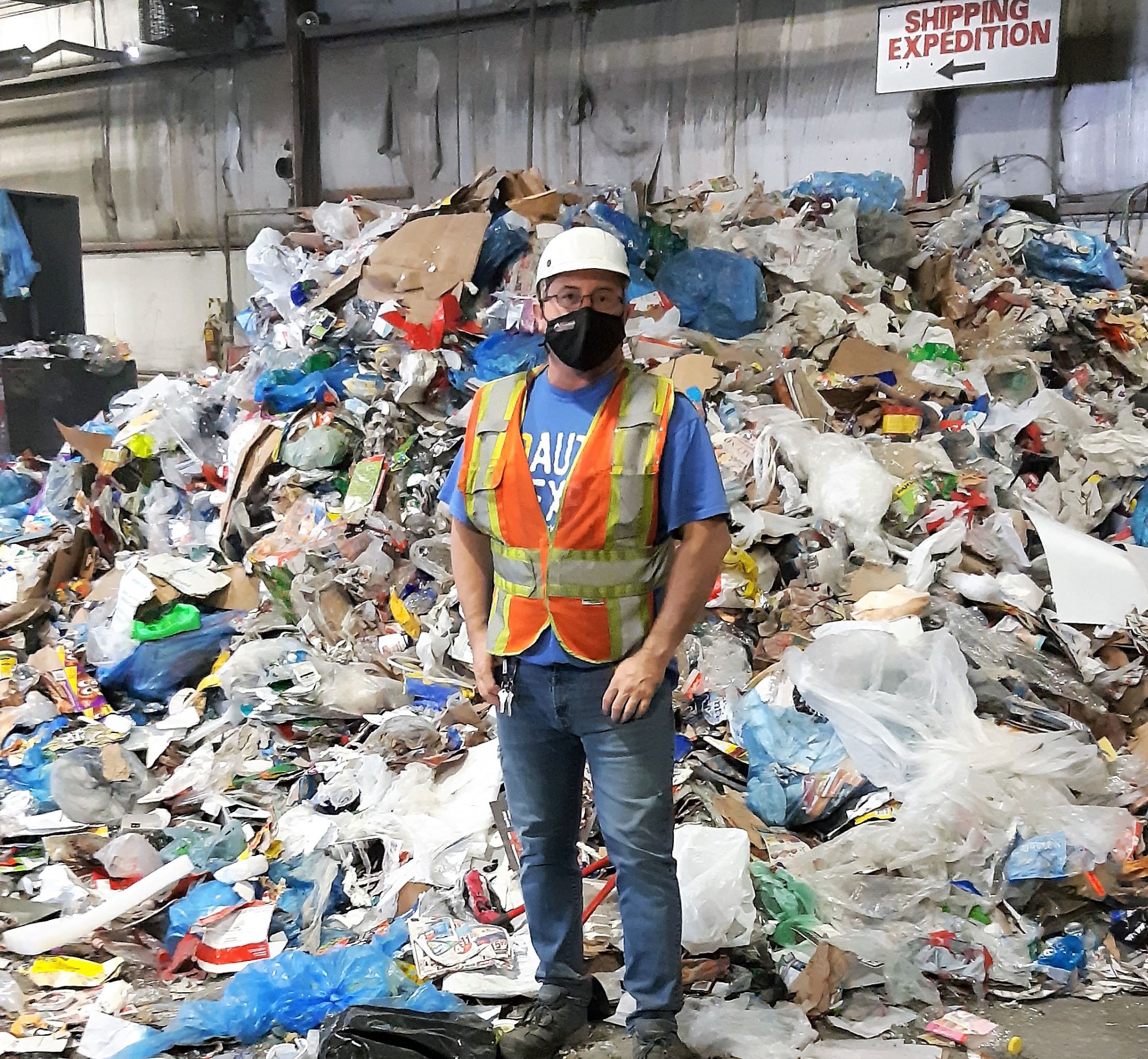 Robert Lessard, Director of Operations for Recycle Action in Hawkesbury, with material for recycling at the Spence Avenue facility.

The amount of items being tossed into area recycling bins has increased since the start of the COVID-19 pandemic last spring. According to the Joint Recycling Committee, 49.56 more tonnes was collected from January to November 2020 when compared to 2019. That represents a 3.7 per cent increase. The Joint Recycling Committee coordinates the collection of recyclables in the Town of Hawkesbury, Champlain Township and the Township of East Hawkesbury.

The Director of Operations at the Recycle Action facility in Hawkesbury says there is something you can do to help workers deal with the larger volume.

You know those plastic grocery bags you toss into the recycling bin with the paper receipt still inside? They are almost impossible to separate and therefore make the bag unusable. But in truth, you might as well just throw the whole bag into the garbage, because that’s where it will probably end up if you leave the paper receipt inside it.

“Plastic bags are one of the most difficult things to recycle – nobody wants them,” commented Robert Lessard, Director of Operations at the Recycle Action facility on Spence Avenue in Hawkesbury. “If you look on our list of things which are allowed to be recycled, plastic bags are not on it, because there are no buyers.”

Recycle Action receives all the blue box material from the Groupe Convex Prescott-Russell Recycling Committee for Hawkesbury, East Hawkesbury and Champlain. The facility also handles residential recycling from Alfred-Plantagenet, Nation and Casselman, as well as providing commercial recycling services for companies in the Hawkesbury region.

The Hawkesbury facility has seen tons more recycling in 2020 since the start of the first wave of the COVID-19 pandemic. The amount of material being sorted at Recycle Action also stayed steady over the past year, bucking normal trends.

“We usually see a trend where when you get to July and August, (the amount of material) goes down a bit, because people have gone camping or are on vacation,” Lessard noted. “We didn’t see that drop – it stayed equal all year.”

Citizens can help out by sorting material

One way private citizens can help their communities deal with the increased volumes is to ensure all different types of recyclable material are properly sorted. For example, one of the things which makes recycling facilities shun the thin plastic grocery bags is the fact that people often leave items inside.

“You’d be surprised at how many people put their bag into recycling and they leave the receipt in it.” Lessard says. “There’s paper in it and that is contamination.”

“On the production line they can’t open plastic bags from 70,000 people to get a receipt out.”

Another example is newspapers and flyers distributed inside plastic bags. It is extremely important to remove all of the paper, because while the bags themselves can’t be recycled, the paper can.

The papers, inside the plastic bags, are often placed in the recycling bin. “We get thousands and thousands of that. If people put the paper in their blue box without the plastic, it helps us a lot.”

Two other items which increased by large amounts in 2020 were cardboard and plastic water bottles. Both are highly recyclable and for the most part easy to sort and bundle for shipment.

“I’ve never seen so much cardboard as in 2020 – cardboard is easy to recycle though, so that’s not a problem,” Lessard said, noting that it is okay to leave tape, shipping labels and packing slips on cardboard, as they do not cause issues.

Water bottles are also easily recycled, however it is very important to remove – or at the very least loosen – the cap. Caps left on plastic water and soft drink can cause significant problems with the machinery which compresses the bottles into bales of plastic. And over the past year, there have been a lot of water bottles.

“It’s incredible, the number of water bottles is probably double that of last year, which is OK, because we have several buyers,” noted Lessard, “But anything that has a cap on it, please either take it off, or at least loosen it.”

“Because if you have a two-litre bottle of Coke and you put the cap back on tight, you can stand on it and it won’t burst. If they’re all like that when we do a bale in our baler, it gives us trouble.”

Anyone looking for more information on recycling rules in the Hawkesbury region can visit the Recycle Action website. Recycle Action can also be contacted for inquiries at 613-632-8508.

Changes are coming to Ontario as the three programs (the Blue Box program, the Electronic, Electrical and Equipment (WEEE) Program and the municipal hazardous waste program) are being transitioned as part of new provincial legislation called the “Resource Recovery and Circular Economy Act” which follows the Waste Diversion Transition Act.

Statistics show that 70% of Ontario’s waste materials end up in landfills instead of being separated for recycling. It is estimated that between 20 and 30 per cent of waste that is sent to landfill sites is compostable. There are no compost programs in place in Eastern Ontario. The new legislation puts the onus on manufacturers and the producers of items such as electronic products to ensure that these items are diverted from landfill and/or recycled or repurposed somehow.