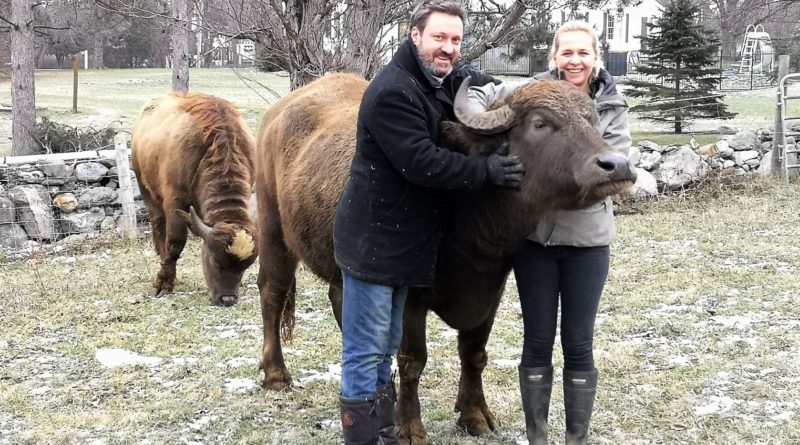 Andre Chabot and Alexandra Quester have quickly discovered that water buffaloes are very social and friendly. Photo by Reid Masson

Some unusual guests will be spending the winter at a L’Orignal airbnb. And these aren’t your usual party animals. Four Mediterranean water buffalos are now being fostered at a local farm/airbnb location.

André Chabot and Alexandra Quester agreed to foster the young male and three female water buffalos – two of whom may be pregnant – at their Duldraeggan property in L’Orignal after being contacted by Humane Society International Canada. The animals had been living through the warmer months at a foster farm in Quebec, which did not have the facilities required to keep them warm through the winter.

“(HSI Canada) knew we had a farm and this was an emergency,” says Quester, who has done past volunteer work for the organization. “If we had not been able to take them in, they would have been slaughtered.”

Mediterranean water buffalos are warm weather animals which are believed to have been introduced to Europe from India, most likely around 600 AD. In countries with colder climates the animals must have shelter provided in the winter, as they cannot survive extended hours in the cold.

The four buffalos arrived at Duldraeggan on December 14 and the extremely social animals have quickly adapted to their surroundings. Curious and friendly, the buffalos are excited to greet The Review’s writer when he enters the building, sticking their heads over the barrier and allowing him to pet them. They have clearly already captured the hearts of their new hosts, who stumble a bit when asked if they might keep the four buffalos and their two impending offspring after the foster period is over.

“I officially don’t want to answer that,” says Quester, breaking into laughter and admitting, “It’s only been a few days but we’ve really warmed up to them.”

“I think these are the most friendly, amazing animals – I can’t believe it.”

Chabot and Quester have a number of other rescue animals on the property – including several horses – so the couple is used to the work required to care for large animals. They have modified a horse-stall building on the property suitable for the water buffalos and have a large outside area just for them to explore on warmer winter days. The horse stall itself had to be strengthened to account for the fact that water buffalos are both strong, and curious.

“There are windows you can see on top of the plywood that we had to cover, because those guys would destroy the windows,” points out Chabot, who is clearly also taken with the animals. “They like to play with things that stick out.”

“And they like to practice with their horns,” adds Quester. “The first day the electric fence was not strong enough, so they took it apart and had fun with the fence.”

The couple is hopeful that a good home will be found for their new friends once the winter is over. Both HSI Canada and RefugeRR in Alexandria – which owns the animals – are working to find the water buffalos a permanent home. However it seems pretty clear that Chabot and Quester are willing to foster them as long as it takes to find a forever home.

“I’m really looking forward to letting them out in the natural pond we have on the property next summer,” says Chabot, as he strokes one of the animals. “It will be amazing to see them in their native environment.”