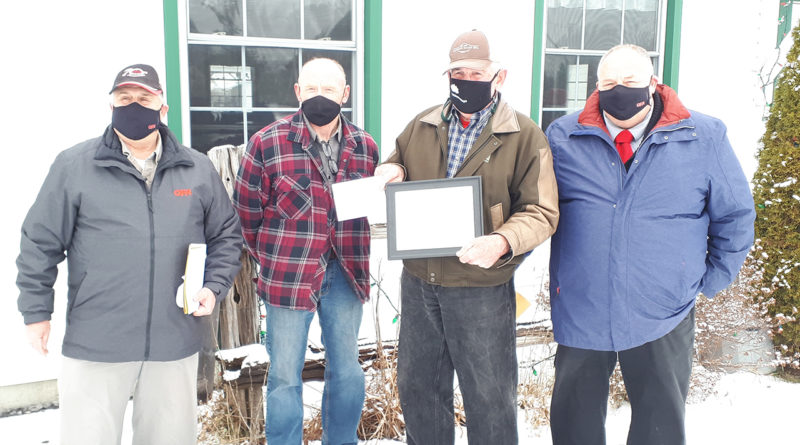 Murray Allen has been a major part of agriculture in Prescott County and across Ontario for more than 60 years.  The Vankleek Hill area farmer is now “easing into retirement” and is stepping away from duties with the Prescott County Federation of Agriculture and Ontario Federation of Agriculture (OFA).  On December 22, both the county federation and OFA presented Allen with a certificate of appreciation and gift for 56 years of service to the organizations and to the community.

“Your influence, guidance, and positive encouragement of local farmers, particularly the young and new members, was outstanding,” stated Brekveld.

Aside from holding positions with the Prescott federation and OFA, and organizing many of their projects, Allen has been part of the leadership of 18 other agricultural and community organizations over the decades.  These include the Vankleek Hill Agricultural Society, Vankleek Hill Curling Club, local and provincial cooperatives, Hawkesbury and District General Hospital, the Prescott and Russell County Board of Education, and Cassburn United Church.

In the community, Allen is still an active curler.  He is a member of the Vankleek Hill Fiddle and Step Dance Association, and his church choir.  Allen is also still a member of the Ontario Livestock Financial Protection Board, the Champlain Township Committee of Adjustment, and the Cassburn Cemetery Board.

OFA Eastern Region Manager Brian Hamilton said that Allen has always put his family, church, and community first and has been an encouraging influence on younger farmers.

OFA Zone 14 Director Rejean Pommainville complimented Allen on his dedication but noted that his family contributed greatly to the success of Allensite Farms.  Allen and his wife Shirley raised six children, many of whom, along with their spouses and children are still part of Allensite Farms.

“Folks, this is really humbling,” was Allen’s reaction to receiving the certificate and gift.

He explained that he always benefitted from attending OFA annual meetings and other events across Ontario.

Allen said that in recent years, he has been impressed by the number of younger farmers attending OFA annual meetings and sharing their ideas and opinions.  He noted that many of the younger participants are women who are bringing enthusiasm and new perspectives to the organization.  Allen said he hopes younger farmers become involved with the Prescott County Federation of Agriculture locally.