All municipalities under EOHU jurisdiction are now under the Ontario government`s Orange-Restrict designation for COVID-19 control.  EOHU Medical Officer of Health Dr. Paul Roumeliotis said on Friday that the current rate of new cases across the EOHU’s territory qualifies it to remain under the orange designation for at least another week.  Those remarks were made amid speculation on Friday that all of southern Ontario could be temporarily designated as a grey-lockdown zone as of Boxing Day, December 26.  However, Roumeliotis did note that there were only seven new cases of COVID-19 under EOHU jurisdiction from Thursday to Friday.

As of December 18, 90,476 COVID-19 tests had been performed at the six testing and assessment facilities, and by paramedics across the EOHU’s territory.

As of December 18, the largest school outbreak was in a dormitory at the Al-Rashid Islamic Institute, a religious boarding school at the eastern edge of Cornwall on Highway 2 where 43 people had had initially tested positive for COVID-19.  It was one of three official outbreaks in schools under EOHU jurisdiction as of Friday.

As of December 18, cases of COVID-19 were also listed at the following schools under EOHU jurisdiction.  The source of these numbers is from information provided by school boards and the Ontario government list which is updated daily.  Two or more cases at a school constitutes an official outbreak, however the decision to declare an official outbreak depends on how the affected individuals contracted COVID-19.

One student at St. Finnan’s Catholic Elementary School in Alexandria

One student at Mother Theresa Catholic Elementary School in Russell

One staff member at T.R. Léger Adult Learning in Cornwall

One student at Morrisburg Public School

The following childcare centres under EOHU jurisdiction had cases of COVID-19 as of December 18:

One child at Happy Face Morrisburg

The following long-term care and other group living institutions under EOHU jurisdiction had active cases of COVID-19 as of December 18:

Prescott and Russell Residence in Hawkesbury

The Palace Long-term Care in Alexandria

On December 17, the Ministry reported that 129,417 or 85.6 per cent of cumulative cases were resolved.  Resolved cases do not include deaths.

There were 877 COVID-19 patients in hospital across Ontario as of December 17.  Out of those 877 patients, 261 were in intensive care, and 168 patients were on ventilators.

There had been 4,098 deaths due to COVID-19 across Ontario as of December 17, comprising 2.7 per cent of all cumulative cases. 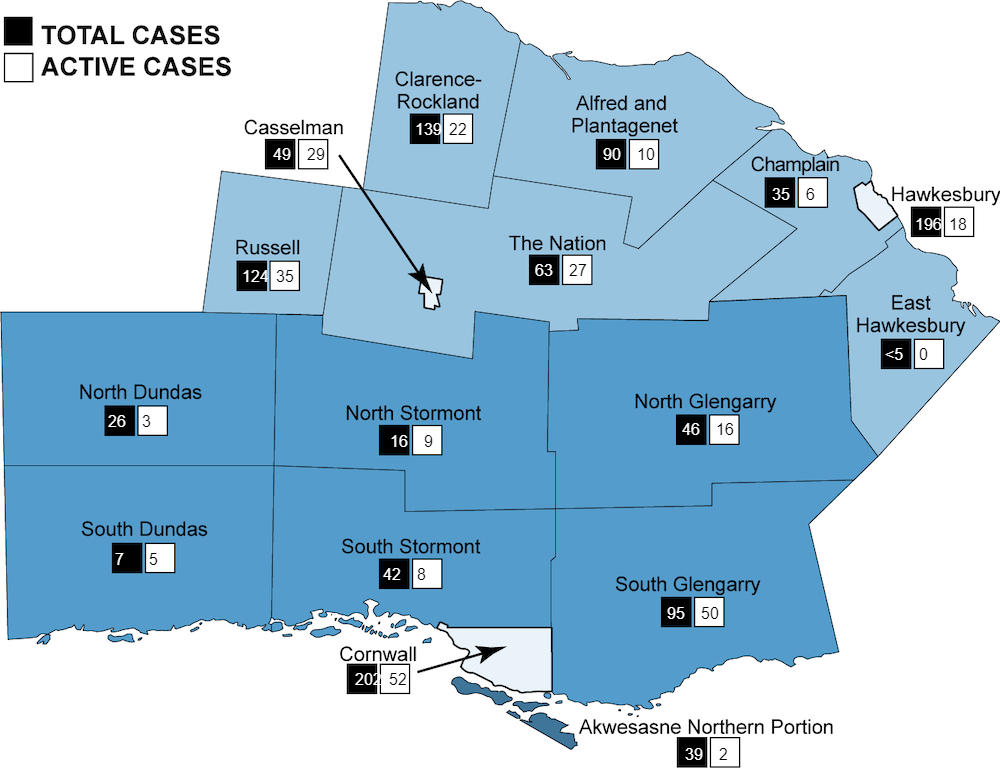