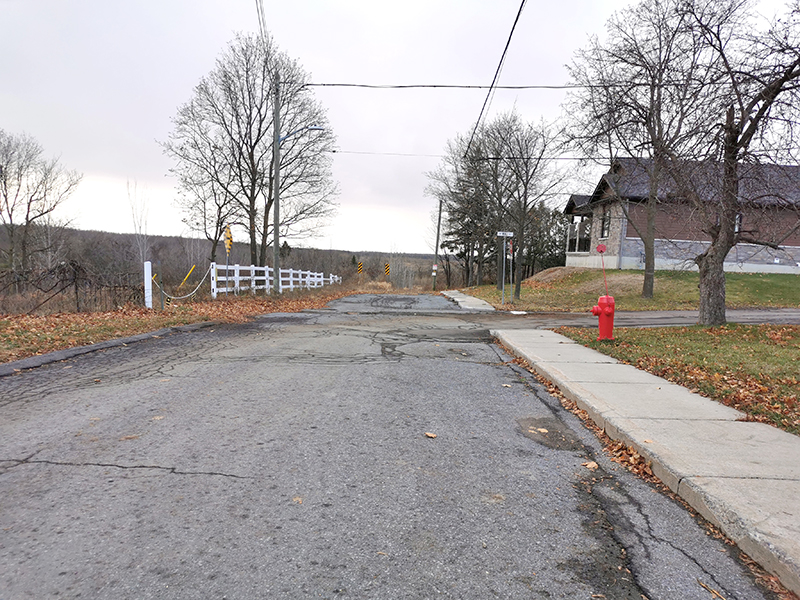 Champlain Township moved forward with a request for a zoning amendment which will change the zoning category for vacant land south of 77 Union Street in Vankleek Hill from R1 to R2, to permit the construction of semi-detached dwellings. The land is located on the east side of Union Street, next to additional vacant land which has long been part of a planned subdivision.

Champlain Township Senior Planner Jennifer Laforest noted that the property in question has no municipal address because the lot is vacant and there is no building on it. The land in question is .56 acres in size. The township’s planning report notes that lands immediately south and north are already zoned R2 and are intended for the future development of semi-detached buildings, which can cover up to 50 per cent of the lot’s square footage.

A drawing of a proposed semi-detached building, which includes an accessory, or smaller dwelling unit, was included with the planning report but did not represent the actual construction; it was just an example provided by the developer, Laforest said.

Neighbours have received notice of the application for the proposed change to the zoning category and comments were received, Laforest commented.

Union Street resident Linda Crawford wanted to know how many duplexes were being proposed for the property, saying that the planning report was vague.

Laforest replied that this zoning amendment would permit the construction of two dwelling units, i.e. semi-detached units, but said that the maximum potential for this property would be four semi-detached buildings, each containing four accessory dwelling units. The planning report said that the township encourages “accessory” dwellings to be 20 per cent smaller than the principal dwelling as well as ensuring that the door to the accessory dwelling be located on the side of the building or below grade to maintain visual consistency with adjacent dwellings. These design considerations for accessory dwellings will be further clarified in upcoming amendments to the zoning by-law according to the report.

If Champlain Township approves the zoning change, and the decision is not appealed, the applicant will be able to construct a maximum of two semi-detached dwellings with one accessory dwelling. Because the lot is  .5 acres with 40 metres of frontage, the applicant could apply for a severance or a part lot control to further divide the property. If the property were divided into four separate parcels for each semi-detached dwelling, then the applicant could place accessory dwellings in each property creating a total of eight dwelling units on the lands currently subject to the rezoning, according to Laforest. The applicants have indicated interest in doing this.

Crawford wanted to know what kind of provisions have been made for Union Street’s road conditions.

“If you are aware at the moment, the north end of Union Street is a roller coaster and Wall Street is not very good. Loch Street is not even open to truck traffic, and is full of pot holes, and could not sustain trucks. My concern is if they are going to use the west end of Wall Street to access this, how are they going to get trucks around that corner?” Crawford asked, adding she would like to hear what plans are in place.

Public Works Director James McMahon answered that trucks have the right to use the roads.

“We know it is in distress (Union Street), and it is on our radar. If we find that the contractor is doing damage to the road, we will call him out,” McMahon says.

“That’s not a very encouraging response, for those of us dealing with a poor-quality street. The other concern is Loch Street,” she noted, saying that although there was a sign at the corner of Loch and Wall Street saying that the short street (Loch) was closed to truck traffic, there was no such sign at the corner of Loch and Union Streets. Crawford said that there were already delivery trucks travelling at high speeds down Union Street due to its proximity to Heritage Lodge.

“I guess my question is are we taking all of this into consideration and are we doing something about it?” Crawford said.

Helene Desjardins had submitted a letter which was too late to include in the meeting package, but her concern was that due to trees having been removed and the possibility of more tree removal, that more water would drain from that property onto her property.

Laforest told Desjardins that her concerns had been relayed to the Public Works department and that someone from the municipality would do a walkabout on the property with her.

Proper drainage is important, Laforest said, adding that the township would want to be sure development does not impact a neighbour.

Champlain Township does not have a tree inventory and does not prohibit a property owner from removing trees on their property, Laforest pointed out.

Desjardins was satisfied with the answer and understood that her concerns would be discussed at the December meeting of council, when the zoning amendment would be presented for a third and final time to council prior to a vote.

Laura Lea Macaulay lives next to the property in question and she asked if the developer was planning to install a fence between her property and the vacant land.

“The developer is here in the meeting, is he not?” Macaulay asked.

“That (a fence) is something we have not talked about, but in fact, if you would like to put a fence, normally, a fence between two neighbours, each neighbour pays half of it,” replied Yvon Blais, on behalf of developer Habitations Robert Inc.

Macaulay said she did not think that would be the case in this situation, but that she thought a fence would be very appropriate.

Champlain Township Mayor Normand Riopel interjected that fence issues are between neighbours and not the jurisdiction of council.
“That would be for you to discuss. That would be a fence dispute. I will let you two dispute the fence,” Riopel said.

Riopel said that he thought the Public Works department already had a traffic count done for that area, turning to McMahon for more information.

McMahon referred to a subdivision that had been proposed for vacant land at the south end of Union Street several years ago.

“When the subdivision was proposed, there was an exit on Bertha Street, but with these small dwellings, there could be two cars per unit. Most people will exit by Wall Street. I don’t see an issue with traffic,” McMahon said.

Laforest commented that the structure was a low-density dwelling and that future development could include eight units across four properties. The eight units would require subsequent severance applications, Laforest noted, explaining that there are more steps needed to get to eight units.

Linda Crawford argued that eight units, with two cars each added up to 16 cars and said that was “a significant increase in traffic for this part of the world.”

A traffic study might not be required, but she suggested it would be ethical to do one.

“I don’t see that there is a whole lot of planning going on here, with all due respect,” Crawford said.

McMahon reiterated that the increase in traffic was not a significant concern.

Crawford maintained that with all eight units developed, traffic on the street would be double what it is currently.

Riopel told Crawford her concerns were being noted.

Macaulay said she agreed with Crawford and that this would mean considerably more traffic in a tight corner.

Blais tried to reassure the neighbours that they would not adversely affect the street.

There will be a 20-day appeal following the decision. Those present who registered comments could ask for written notice of council’s decision.

Habitations Robert Inc. is also responsible for a residential development east of Stanley Street, connecting to Higginson Street and to Farmers Avenue, which will include 272 lots (213 single-detached units and 118 semi-detached units), to be completed in phases, with the first 50-dwelling phase set to start next year. The residential expansion should roll out during the next 15 years, with complete slated for 2035.