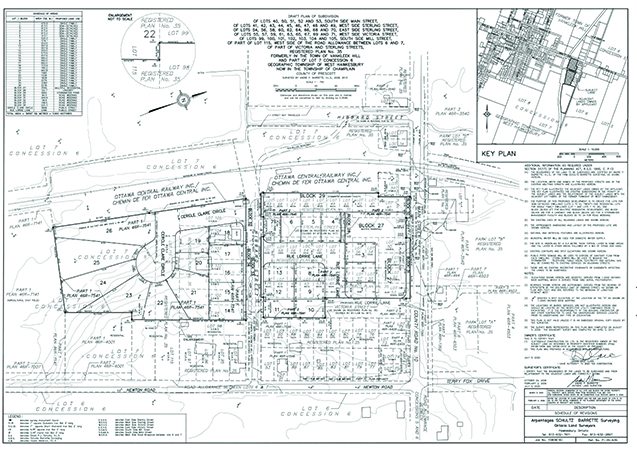 This is a 2020 drawing of the Cliftondale subdivision which will be fronting on Main Street East, near Hibbard Street.

An application from Royal Alexander Farms to renew a previous consent was presented to Champlain Township council on November 12. Previous consent had been given for the creation of a lot just west of Tupper Street on the south side of Highway 17. The applicant needs more time to build on the lot and has also indicated it wants to increase the size of the parcel. The United Counties of Prescott-Russell (UCPR) advised Champlain’s planning department that the change requires a new resolution from council.

Senior Planner Jennifer Laforest said that a development agreement will be required for the construction of a municipal road, to assure roads that will be assumed by the municipality will be in conformance with current requirements. A holding agreement will be removed and a third condition is that taxes will be paid up to date before the release of these conditions.

Council also heard that the applicant for the Cliftondale subdivision, to be located along Main Street, across from the Vankleek Hill Business Park, has submitted a revised lot configuration.

Since 2009, Champlain Township has issued two renewals and zoning amendments have been completed. But Laforest said that the changes in lot configuration require a revised approval. The township has taken the opportunity to update its requirements related to stormwater management. A subdivision agreement had not been signed yet, she noted.

“We are confident this application will continue to move forward. But a lot of things are happening; overall, the plan is fairly consistent with what the expectations are for development in this area,” Laforest said.

The residential development is to take place on a seven-acre property (3.95 hectares). The original plan, approved in draft form in 2009, included 10 single detached dwellings, 10 semi-detached dwellings and 12 row house dwellings. In 2012, Champlain Township amended the zoning by-law to reflect the development plan.

In 2014, the UCPR and Champlain Township extended the approval of the draft plan of subdivision for an additional five years. In 2015, Champlain Township approved a subdivision agreement for the property, which was never signed by the proponent. The township did not receive or hold construction bonds for civil works. While the applicant did not enter into a pre-servicing agreement, the proponent completed the engineering review for civil works. In 2019, the UCPR issued a second five-year extension to the draft plan of subdivision.

On September 22, 2020, Champlain Township received notice from the UCPR related to a revision to the approved plan of subdivision. The major modification request is to reduce the number of entrances on County Road 10, reduce the number of single dwelling units from 27 to 21, relocated the semi-detached dwelling lots, relocate the stormwater management pond and maintain a large block with frontage on County Road 10 for the purpose of apartment housing or condominium development.

The property legally described as Part of Lot 7, Concession 6, is currently vacant with the exception of a former farm dwelling, barn and two sheds. Developer Dale Clare of Cliftondale Construction Co. Ltd. confirmed that the heritage home will stay where it is, assigned to that lot in the new development. 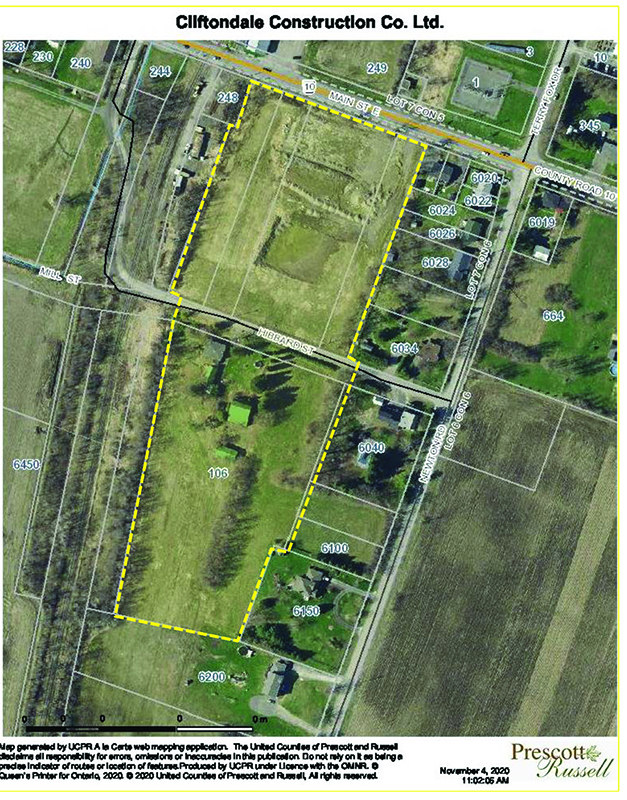