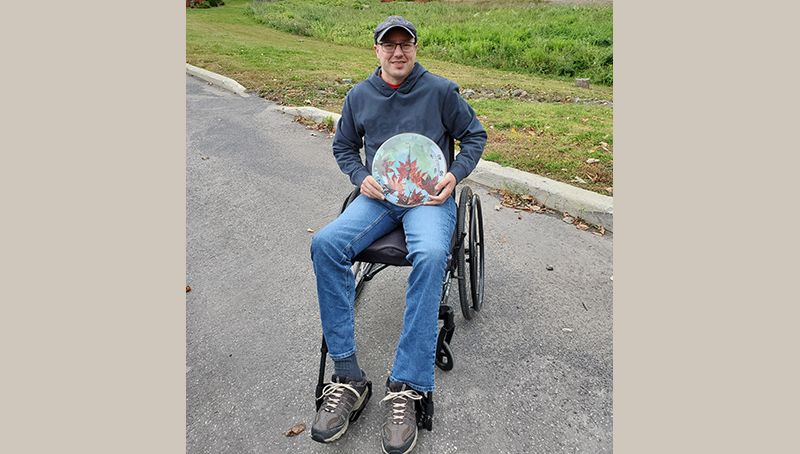 This photo is from an October 2020 visit.

Rainer Pethke of Berwick is advocating for his son Carlin, who at age 37 has been living at the Prescott and Russell Residence in Hawkesbury for the past year.  The COVID-19 pandemic has complicated Carlin’s communication with his family in recent months.

Carlin was diagnosed with Multiple Sclerosis (MS) when he was 19 and lived on his own in Alexandria where he was was employed as a construction worker. When he could no longer work or live independently, he then lived at home with his father until 2019 when that living situation became too difficult.

Two formal complaints to the Ontario Ministry of Long-Term Care have been investigated at the Residence on Carlin’s behalf since he has lived there.

According to a report from August 5, 2020, a ministry inspection was conducted between June 22 and 29 where five written notification non-compliances and two voluntary plan of correction non-compliances were issued.  The complaint was made after Carlin was first refused a portable air conditioner in his room, and an additional portable fan, both of which he needs to help alleviate his MS symptoms.

According to Rainer Pethke, the administration allegedly claimed that there were concerns that portable air conditioning units could contribute to the spread of COVID-19.  The Pethke’s contacted the MS Society of Canada which issued a prescription for a portable air conditioner in Carlin’s room.  The family also contacted the Eastern Ontario Health Unit which stated there was no scientific proof that air conditioners spread COVID-19 and that the unit should be installed.

When Carlin decided to purchase a second electric fan for his personal use, Residence staff allegedly told him he could not have it, which Rainer said was a case of verbal abuse from the staff member, which led to his son having a severe attack of his MS symptoms.  Rainer said that Carlin’s first fan was also taken away from him following the confrontation between him and the allegedly verbally abusive employee.

Before the complaint was made about the air conditioner and fan, Carlin’s wallet had been stolen.  Rainer said that they initially did not report the incident out of a desire to avoid potential retribution.  However, the wallet was later found in the laundry and a staff member accused Carlin of setting him up for being responsible for the theft.  The family unsuccessfully attempted to have a restraining order issued against the staff member.

The ministry inspection found that the wallet theft was not immediately reported to the police and that the family reported Carlin had been alleged verbally abused by an employee.  The report indicates that the Residence notified the police four days after it had been notified of the alleged verbal abuse.  The ministry also found that Carlin reported that money was missing from his wallet when it was returned to him.

In addition to the missing wallet, the complaint was also made regarding air conditioning and fans.  However, the ministry report only discusses the wallet situation.  Rainer said that the inspection did not resolve the issues involving the fans and air conditioning.

A second Ministry of Long-Term Care inspection report dated August 20, 2020, resulted from an attempt to discharge Carlin from the Prescott and Russell Residence without adequate reasons.  Rainer said the discharge notice was delivered to Carlin late on a Friday afternoon saying that he would soon have to leave the facility.

“You can’t discharge a bedridden patient into the community,” said Rainer.

The ministry investigated for nine days but made no findings.  Indeed, the investigation report contains no summary of what the inspector found.  No orders of non-compliance were issued either.

Rainer said that the Ontario Patients Bill of Rights was violated and that he has been regularly providing information to ministry inspection staff at the Ottawa office.  He has also been writing letters to United Counties of Prescott and Russell mayors and administration about the challenges Carlin is facing.

“They have no one else like him,” Rainer said of his son, noting that his young age and mental abilities allow him to advocate for himself as a resident.

“What about the young and disabled?” he asked.

Currently, no visitors are permitted at the Prescott and Russell Residence due to the COVID-19 outbreak, although special exemptions are granted if a resident is palliative.  Residents are not currently permitted to leave the Residence to visit family or friends.

Rainer claimed that the Residence’s rules contravene a directive issued by the Ministry of Long-Term Care in September that permits a registered caregiver to visit a person living in a long-term care facility, even if there is a COVID-19 outbreak designation.  Rainer also said that when he applied to be Carlin’s designated caregiver so he could visit him, Residence administration first told him that he would have to be responsible for all aspects of Carlin’s care, including hygiene.

“That was not the intent of the policy at all,” said Rainer.

In recent days, Carlin Pethke’s challenges with the Prescott and Russell Residence have also caught the attention of CBC Ottawa and the Global television network.