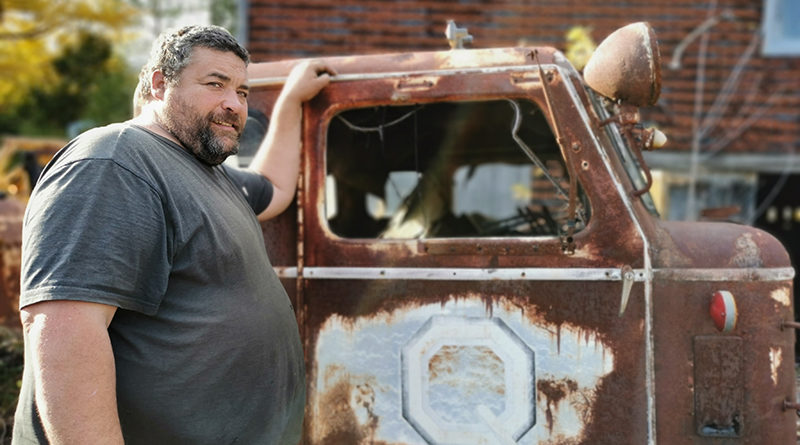 Denis Welden is seen here with a right-hand drive 1952 Sicard vehicle, which he thinks may have been used with a snowblower at one time.

Denis Welden knows that people don’t see things the way he does. You might think the appearance of his property at 102 High Street leaves something to be desired. There are vehicles in the front yard, some of which are in various states of being dismantled. A restaurant building, closed for years, sits empty on the property. There is a old repair shop on the site and yet another older building on the property.

Welden was forced by the township to build a fence to enclose some of the vehicles on the property several years ago, and the municipality has exerted pressure on the business for decades to “clean up.” He admits he could tidy up a bit and points to a pile of items that are scheduled for pick-up by a scrap metal dealer.

But there is more here if you take a closer look. There is a passion for reusing steel, engines and parts from the sometimes-rare vehicles that he has on the lot. There is larger thinking at work about the quality of all of the parts of vehicles made decades ago and how we could be re-using these. There are questions about how we dispose of vehicles without a second thought, even while our governments push the environmental benefits of reusing, recycling and repurposing almost everything — but cars and trucks. (These are usually sent to the scrapyard.)

“I hate it when people call this a scrapyard,” Denis admits. “For me, these are useful parts, vehicles I will rebuild or that mean something to me,” he says, pointing to a tractor, for example, that was made from a car. The chassis of a Model A Ford has the original front wheels but has large tractor tires on the rear end.

Still called “Welden’s Mechanical Services”, the business is really more about custom building vehicles than doing repairs. While The Review visited, we saw an overland vehicle under construction — a vehicle that will be capable of crossing any terrain and will have accommodations built into it, as well as spare parts and tools for repairs.

“This vehicle will be able to drive anywhere — even into remote areas, so if there is a break-down, you have to be able to fix it to keep on going,” says mechanic Steve Brindamour, who clearly has the same outlook as his boss.

“Too much is being lost,” says Brindamour, who explains that electronics has taken over the car industry. What he likes about working for Welden is repurposing old technologies — but to the two of them, it also means keeping heritage alive.

Brindamour says the custom-built overland vehicle will include new and old technologies. It’s complicated. And this writer isn’t sure she understands it completely, but certain systems will have redundancy built in — so that if an electronic fuel injection system fails, the analog system will take over. And vice-versa. It’s the same thing for brakes. It has two of everything, says Brindamour, who (no surprise) is an electronics technician with a mechanical background.

Describing today’s world of car repairs as “plug ‘n’ play”, Brindamour says that everything that breaks down is replaced. Nothing is repaired any more. He talks about vehicle design advances during World War II — hardy vehicles that were built so that they could be repaired.

A conversation with Welden is a whirl of years and numbers — it can be hard to follow. He describes the elements being used to build the long-distance trail truck — you could call it a travelling time machine — with a power wagon from  1952 and a 1975 Dodge chassis, a 1990 engine, a 1996 transmission and a 1999 rear-end, he says they are using the cream of the technologies to build it. Less than one per cent of the population will ever own a vehicle like this; its flexibility is its biggest asset.

As Welden and Brindamour talk, the conversation comes around to the Willys jeep and the story of the Bantam jeep — with Ford involved, wartime, bids for government contracts and how it shook out in the end. You can read about it online. But the thread of vehicles as it connects to history is a common one at 102 High Street.

The location was at one time part of the Durant Brothers’ business in Vankleek Hill, who by 1894 were producing finished wood products rather than just lumber, including wooden pumps and wagons, in addition to making and repairing wagons, tumbral carts, cutters and sleighs of all kinds, washing machines, wheelbarrows, step and section ladders, clothes bars, towel rollers, churns, etc. Noah and Alva Durant arrived in Vankleek Hill in the early 1870s. To close the loop: Howard was the second son of Alva and had two daughters, Helen and Verna; the latter was Alva Welden’s mother.

Even the name of the business is something Welden is holding on to because that is the name his father assigned to the business. But, Denis explains, conventional repairs are not where his heart lies. It is the custom work, the creative challenges that he loves. He is thinking of bringing the custom-built all-terrain car to SEMA — a move which he says could put Vankleek Hill on the map as a go-to place for custom-built vehicles. SEMA stands for Specialty Equipment Market Association, and for the first time in its 50-year history, the annual Las Vegas event has been cancelled for 2020 and is instead offering an online marketplace to allow manufacturers and resellers in the specialty automotive segment to connect and conduct business. But there is always next year.

As Welden gives a tour of the vehicles in the yard, he points to a 1948 Massey Harris tractor that he purchased at age 15. And he shares another dream: to have an agricultural museum in Vankleek Hill. He doesn’t have the funds to undertake the project himself, he says, but still — he thinks about it.

He points to history everywhere, and several of these tractors and vehicles have a story attached to them.

People think it’s junk but you can overhaul anything,” Welden says.

Welden began spending time in his father’s repair shop at a young age and he was reading about vehicles since he was in grade school. He became a licensed mechanic at age 24. He and Steve are off on a tangent about Hot Rod magazine and how the custom section was always their favourite part.

“I learned a lot from my Dad and from Shorty Milkovic and Don MacCallum,” Welden emphasizes. Alva Welden was known as the go-to expert for motorcycle repair for decades.

Denis Welden knows that people don’t see things the way he does.

“I know I’m different and I see things differently. It’s always been like that.”

They say that the overland vehicle, which they are building from scratch, will be completed by the end of the year.

louise has 1381 posts and counting.See all posts by louise