There were 81 active cases of COVID-19 across the jurisdiction of the Eastern Ontario Health Unit (EOHU) as of October 6, bringing the number of cumulative cases to 305.  Out of that amount, 212 cases were officially resolved.  Russell Township had 19 cases, the highest number of active cases in the region.  It was followed by the City of Clarence-Rockland with 18 cases, and Township of South Glengarry with 12 active cases.

There were no active cases in Champlain Township or in East Hawkesbury Township as of October 6.

Four schools across the EOHU`s jurisdiction had cases of COVID-19 as of October 6.

As of October 6, two COVID-19 outbreaks at long-term care facilities under EOHU jurisdiction remained in effect.   They are at the Foyer St-Jacques facility in Embrun and Résidence d’Érablière in Limoges.

The number of COVID-19 deaths across the EOHU territory as of October 6 remained unchanged at 12.

“Don’t come here, stay in your red zone,” was EOHU Medical Officer of Health Dr. Paul Roumeliotis’ message on October 5 to Québec residents who live in designated red zones of that province.  Nearby red zones include Vaudreuil-Soulanges and Montréal.  During the previous weekend, there had been reports of people from red zones driving to Eastern Ontario to enjoy activities under fewer restrictions than at home.  Roumeliotis said that residents of those areas should not be travelling outside designated red zones.

According to the Ontario Ministry of Health, there were 8,456 active cases of COVID-19 across Ontario, out of a cumulative 55,362 cases.  From October 4 to October 5, there was an increase of 548 cases or one per cent.   The Ministry reported that, 46,906 or 84.7 per cent of cumulative cases were resolved. As of October 5, there were 192 COVID-19 patients were in hospital across Ontario.  Out of those 192 patients, 41 were in intensive care, and 26 patients were on ventilators.

There were 74 new cases of COVID-19 in schools across Ontario on October 6, out of a cumulative 611 school cases so far.

Active COVID-19 cases across EOHU jurisdiction as of Tuesday, October 6. 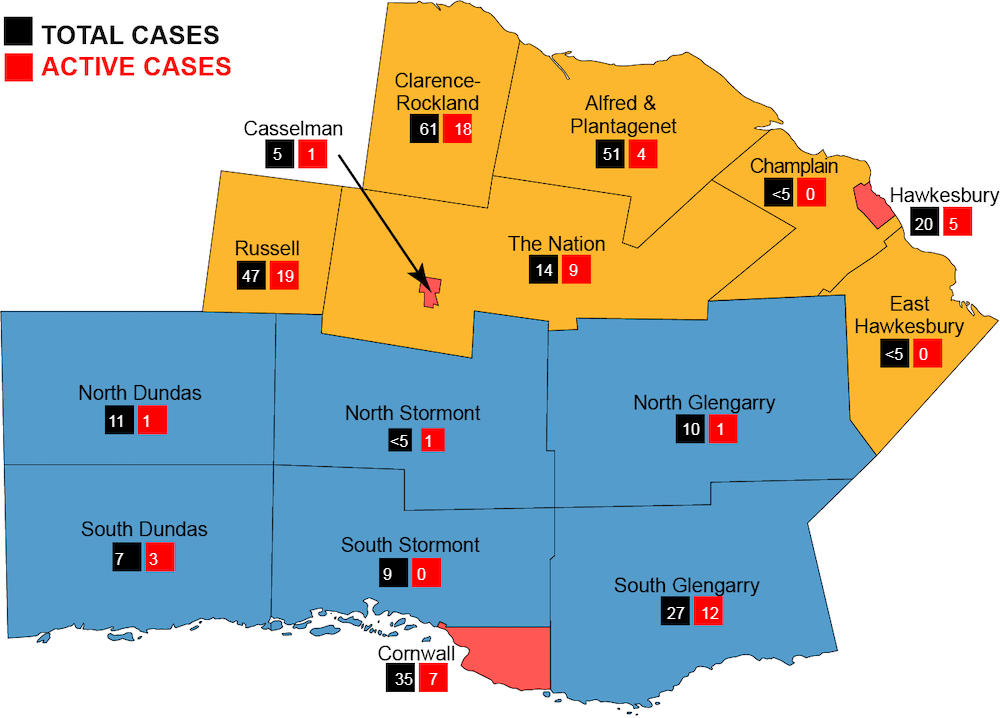