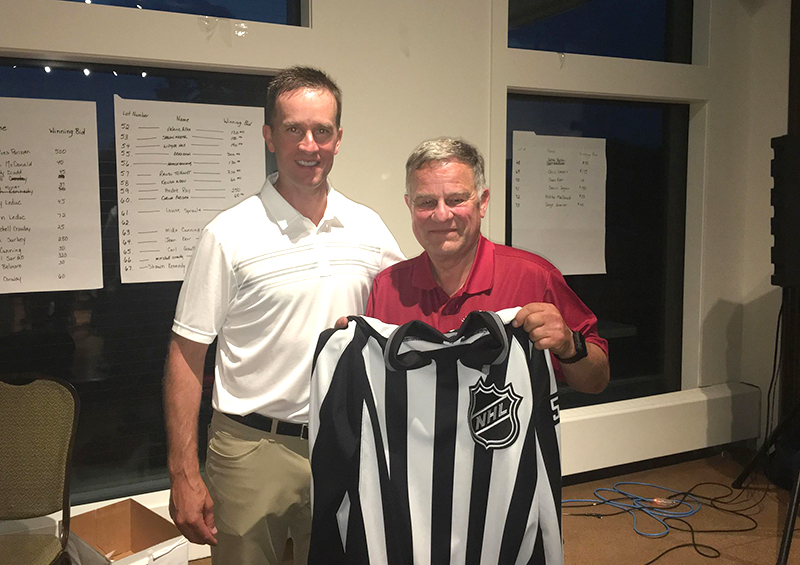 When NHL referee Steve Barton is at home, you might find him organizing events, like the Steve Barton Golf Tournament, which raises funds for local not-for-profit groups. He is seen here (at left) with Jacques-Yves Parisien, of Hawkesbury Toyota — one of the 2019 golf tournament sponsors — but Jacques-Yves is smiling here because he had snagged one of Steve Barton’s ref shirts in the silent auction. Overall, the event raised more than $24,000, which was shared by the Vankleek Hill and District Historical Society, the Higginson Tower Committee and the Fusion Hockey.

Steve Barton has taken Vankleek Hill all the way to the Stanley Cup finals.

The veteran National Hockey League linesman has been named to the 10-man officiating crew for the finals between the Dallas Stars and Tampa Bay Lightning. It’s the first time in his 20-year-career that Barton has partaken in the finals, after 1,269 regular season and 88 playoff games prior to this year’s playoffs.

The 48-year-old official served as a standby linesman for Game 1 of the series in Edmonton, and was scheduled to be on the ice for Game 2. Reached by The Review on Monday morning just hours before taking part in his first Stanley Cup finals game, Barton noted the chance to work the series was a tremendous honor.

“Obviously, it’s the pinnacle of my career in terms of my body of work, but it’s also been a unique experience being in the NHL ‘bubble’,” Barton said, of working the NHL playoffs for the past two months.

Like all players and other officials participating in the playoffs, Barton has had to remain away from his family for the duration of time he has spent in the NHL’s bubble. It has been exactly two months since he has been able to return to Vankleek Hill to spend time with his wife and two sons.

“I left home on July 21, so it’s been a trying experience for my wife Elizabeth and my two boys Lochlan and Cameron,” Barton said, noting he is anxious to return home once the finals are completed. “It’s great to be part of the Stanley Cup final, but it will also be great to get home to Vankleek Hill!”

All of the games in the 2020 Stanley Cup finals are being played at Rogers Place in Edmonton. Should it go the entire distance, the seventh game will wrap up the series on September 30.