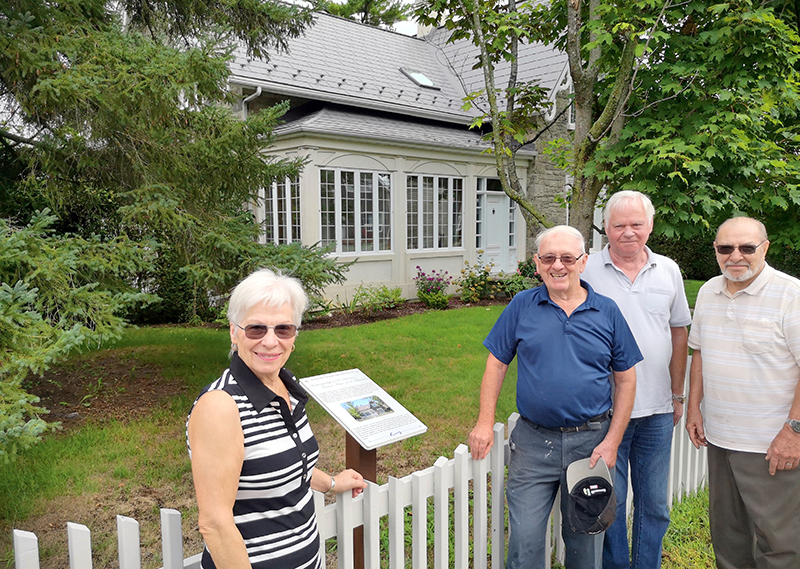 The installation of heritage plaques in L’Orignal took place in August. Volunteers from the Patrimoine L’Orignal-Longueuil Heritage group are seen here installing an information plaque in front of one of 16 heritage buildings in the community. The plaques were made possible through a grant from Champlain Township aimed at preserving and recognizing history in the region. Above (left to right): Patrimoine L’Orignal-Longueuil Heritage President Louise Bedard and volunteers Jean-Francois Bedard, Jean-Louis Lepage and André Lussier stand in front of the historic St. Andrew’s Manse in L’Orignal after installing a heritage plaque to recognize the building’s history. Constructed in 1860 by John. W. Higginson, the stone house of Scottish design served as the residence of the minister from the adjacent church until 1958 when it was sold and became a private home.

A report was presented by Champlain Township Chief Administrative Officer Paula Knudsen at the township’s regular meeting on September 10.

L’Orignal councillor André Roy was of the opinion that he was aware that some organizations had returned the funds, but said that if an organization did not meet (municipal) requirements, those were among the grant recipients he would like council to review.

L’Orignal councillor Jacques Lacelle declared a conflict of interest as he is part of the L’Orignal Food Bank Committee.

Knudsen suggested going through the list to review each organization and the grant it had received.

She began with Arbor Gallery, which had received $700 and pointed out that the gallery was resuming activities in the autumn of 2020 and had hosted two online art exhibits. Council agreed to allow Arbor Gallery to retain its $700 in funding.

The Vankleek Hill Agricultural Society had received $4,000. Knudsen explained that the not-for-profit organization has a lot of fixed costs and that it lost its main source of revenues due to COVID-19.

Roy pointed out that as these were public funds that might be used for operational expenses, “Do we have the responsibility (for this)?” he asked.

Vankleek Hill councillor Peter Barton pointed out that the group did hold an event this year.

“But they have done this (the annual fair and other events) for years now to the benefit of all of us. They will hopefully hold a fair next year and I would move to leave the funds with them,” Barton said.

“For all the years and all the services provided to the community, I would leave the funds with them,” said Miner.

The Higginson Tower and its $4,000 grant were up next for discussion. Peter Barton declared a conflict of interest as he is part of the not-for-profit Higginson Tower board of directors.

Knudsen said that while the tower was not open for its usual summer hours, there had been private tours at the tower. The configuration of the tower space didn’t lend itself to being open to the public due to COVID-19.

The tower committee hosted the Ottawa Paranormal Society for filming and the airing of that program will benefit the community, Knudsen said, adding that fundraising for this group, as for most local organizations, has been almost non-existent during this time when businesses are also struggling.

Bigelow interjected with what she called a broad comment on all of the not-for-profit groups.

“All organizations and businesses have been struggling and a lot of these organizations have their ongoing costs: they have insurance, advertising and other costs. We gave this money in good faith before COVID hit and I think we should leave it with them (these organizations). I think it should be a blanket thing,” Bigelow said.

Roy stated that although he was not personally against these organizations, he was not convinced that they money should not be returned to the township.

Some discussion ensured about the the township’s policy that grant funds cannot be the main source of funding for a not-for-profit group or organization.

Miner pointed out that perhaps this year, the recipients are not meeting the policy. But the present situation is something that we’re not accustomed to, he stressed.

Vankleek Hill councillor Troy Carkner pointed out that the township’s policy didn’t contain any reference to a pandemic.

A brief discussion took place about $5,000 received by the Old Jail in L’Orignal, with councillors questioning that the Old Jail had been open throughout the pandemic. But there was no mention of withdrawing the funds.

Bigelow clarified that if the township left funding in place for 2020, that organizations could re-apply for 2021. Knudsen confirmed that was the case.

That meant that the remaining 10 organizations proceeded or will proceed with events or projects as planned or would like to keep their funding for operational expenses — for a total value of $22,195.

Originally, $24,464 was allocated as community grants as follows: