On Thursday, September 3, the Eastern Ontario Health Unit (EOHU) announced that there had been an additional death due to COVID-19 within its jurisdiction, bringing the total number of deaths to 12.

However, the death did not occur recently.  It took place in May during a COVID-19 outbreak at the Pinecrest Nursing Home in Plantagenet, which also claimed 11 other lives.

EOHU Medical Officer of Health Dr. Paul Roumeliotis said on Thursday that additional death was identified after the system and definition criteria for the identification of COVID-19 cases changed.  He said that the case was not initially thought to be COVID-19 but subsequent changes and investigation have revealed it as such.

Two institutional outbreaks of COVID-19, one at Auberge Plein Soleil in Alfred and one at Dundas Manor in Winchester remained in effect on Thursday.

Since the final week of August, the EOHU has been reporting the number of cumulative and active cases of COVID-19 in each of the 17 municipalities across its jurisdiction.  On Thursday, Roumeliotis said that more local statistics will be added in the coming weeks.

As of September 3, there were no active cases in Champlain Township, East Hawkesbury Township, North Glengarry Township, and the Municipality of Casselman.

As of September 3, 42,192 tests for COVID-19 had been done at the six testing and assessment centres across the EOHU territory, and by paramedics.

The number of COVID-19 patients from the jurisdiction of the EOHU in hospital as of September 3 was zero.

The Ontario Ministry of Health had recorded a cumulative 42,686 confirmed cases of COVID-19 across the province as of Wednesday, September 2.  However, 38,625 or 90.5 per cent of those cases were resolved, which means that 4,061 cases were active across Ontario.

There were 60 COVID-19 patients were in hospital across Ontario on September 2.  Out of those 60 patients, 19 were in intensive care, and 9 patients were on ventilators.

Cumulative and active COVID-19 cases by municipality across EOHU territory as of Thursday, September 3, 2020. 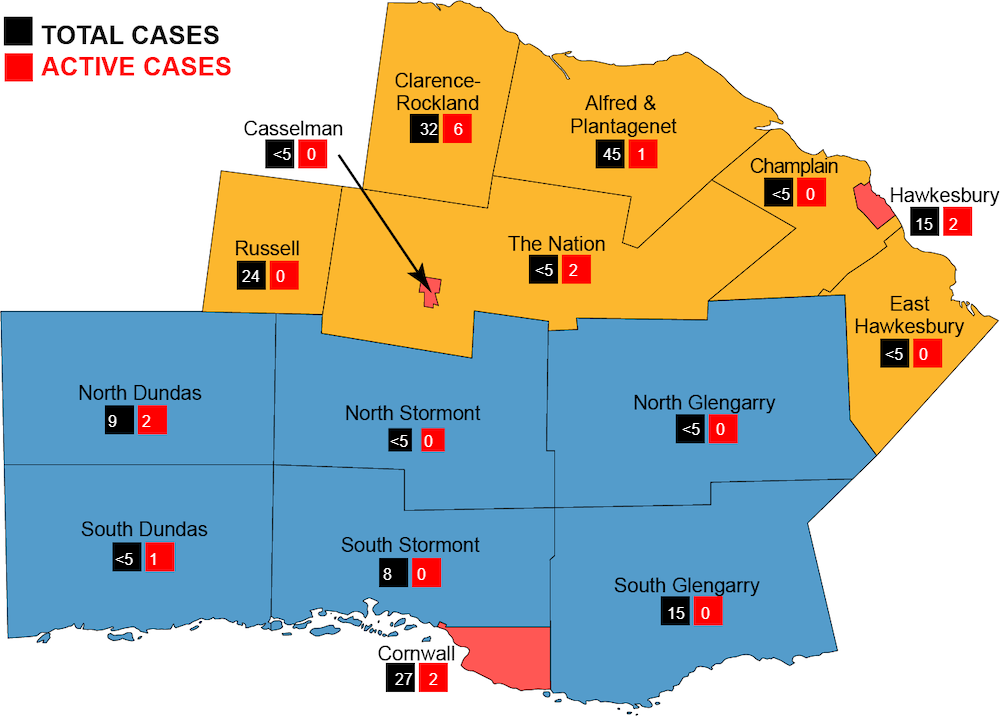