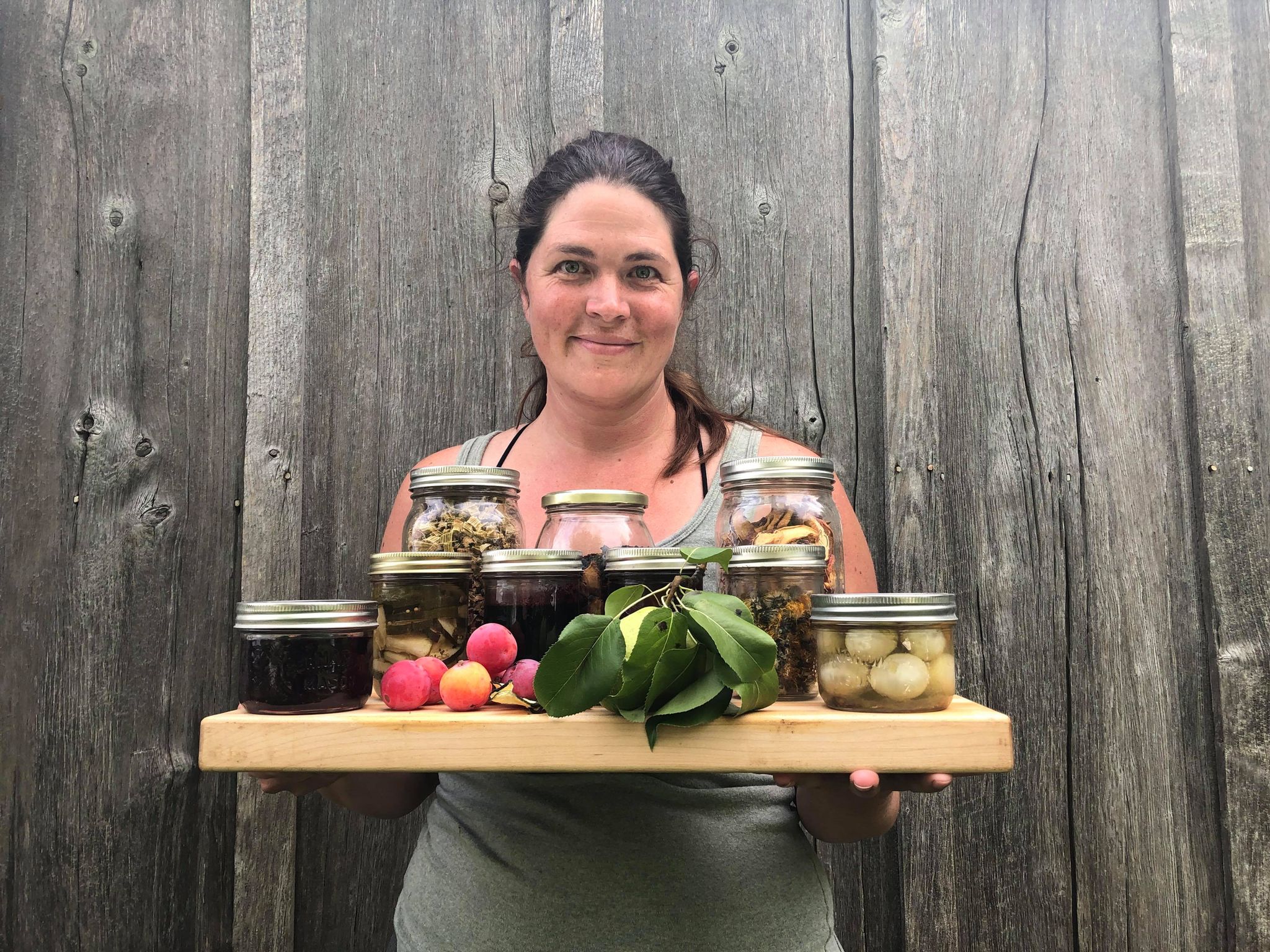 Patricia Crockford of Dalkeith with a display of some of the items she has been preserving.  They include pickled quail eggs, honey berry jam, quince jam, gooseberry jam, pickled zucchini, dried dandelion flowers, dried apples, dried blueberries, strawberries, and mint.  Fresh plums and pears ready for preserving. Submitted photo

Many a kitchen is filled with steam and the smell of cooking fruits and vegetables this time of year.  This is when the harvests from gardens and orchards end up as pickles, relishes, chutneys, jams, jellies, or preserved as is for enjoyment during the months without fresh local produce.

We asked Review readers what they are putting away in Mason jars or freezer bags, and there are clearly some industrious gardeners and home preservers around our communities.

Gardening, and preserving what the garden grows is a major endeavour for Camille Campeau.  She has access to eight gardens, which means a lot of tomato chutney, marinara sauce, pickled beets, slippery jacks (brown capped mushrooms), dill pickles, and bread and butter pickles.  She dried and cleaned approximately 3000 garlic cloves, most of which will be replanted with the hope of having a yield of 15,000 next summer.  Campeau made garlic scape pesto this summer and froze it.  She gave 15 bags of garlic scape to friends and is expecting to have about 40 spaghetti squashes.  Campeau said that she gives a lot of vegetables away at the foyer of the residence where her mother lives.  She said that most of the residents had gardens at their previous properties and appreciate receiving fresh vegetables.

Pickles and various tomato preserves were by far the most popular in the comments from readers who responded.  Even for people who do not have farms or gardens, preserving is still a popular, late-summer/early autumn activity.

Patricia Crockford said that she has dried and canned items from her own garden and from local pick-your-own gardens.  She has made zucchini flour and jelly from hot peppers.

Green and yellow beans, carrots, peaches, pears, chicken soup, onion soup, brown beans, chili, and sauerkraut are among the items Debbie Brown said that she preserves, making it sound as if a complete meal can be found from the jars on her cellar shelves.

Salsa, which certainly did not originate in Canada, has become a popular preserve.  Kim Pedersen shared a photo of her garden which she said yielded 28 jars of salsa this season.

Preserving meat harkens back to the days when home freezers were less common and people wanted to preserve as much meat from their own livestock as possible.  Sausage, stewing beef, and poultry can easily be sealed in Mason jars as easily as pickles or chili sauce.  Megan MacGregor-Forget said that she buys chicken and turkey whenever on sale to preserve in jars.  MacGregor-Forget also buys figs in bulk and makes balsamic fig jam with them.

Preserved foods from the garden in summer are always a great reminder of goodness from the ground when it is covered with snow in the winter.