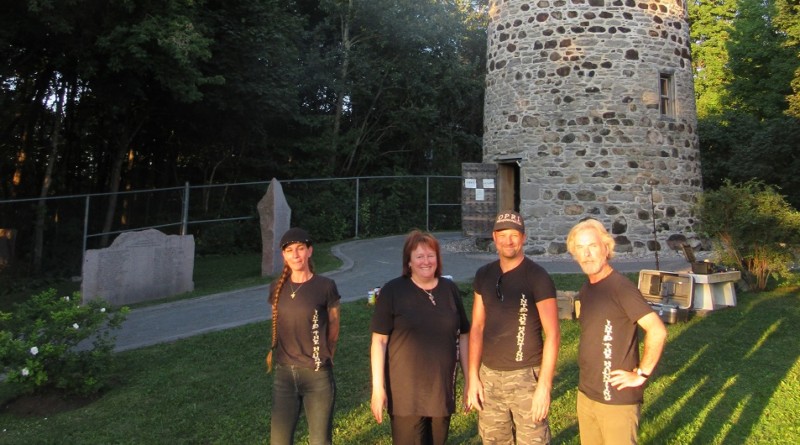 Take one tower. Add some history. Wait until dark. And see who stops by.

Visitors were precisely what a group of paranormal investigators were hoping for, when they recently spent an evening and a good part of the night hoping to find out if Vankleek Hill’s Higginson Tower is haunted.

On August 15, four members of Ottawa Paranormal Research and Investigations (OPRI) set up infrared cameras inside the tower that were connected to a computer monitor set up on the lawn.  Investigators took turns keeping watch inside the tower for any suspicious activity that could have indicated the presence of spirits and ghosts.

“We’ve heard some stories from people who lived in the town that this place is haunted,” said John Moore, the Founder and Lead Investigator of OPRI.

Those stories include reports of phantom noises, bangs, windows opening on their own, and hands visible through the upper level windows at night.

OPRI has 10 investigators, all of whom have regular day jobs.  Moore is an automotive mechanic, and others work in medicine, are public servants, or serve in the military.

“We all have the same passion for the paranormal,” Moore said.

Moore’s interest in the paranormal began after an encounter with the paranormal when he was eight years old in Perth-Andover, New Brunswick at the funeral home his family owned.

One day, after a wake had ended, Moore looked down the stairs and saw an elderly man.  The man waved at him and said hello.  His father heard him say hello back and asked his son who he was speaking to, but no one was there.  Years later, he saw a photo of the man in a family album and it turned out to be his great-grandfather — who had started the funeral home.

Moore has had several paranormal encounters in the years since.

“I’ve been touched, scratched and had things thrown at me,” said Moore, adding he has also heard a few voices over the years.

Paranormal activity has its share of skeptics.  Moore said that the OPRI investigators try their best to show proof through raw video and audio footage.  He said it is easy to tell if audio or video evidence has been tampered with.

OPRI not only helps find spirits, but investigators also help remove them.  Moore sometimes enrols a Roman Catholic priest from Ottawa with exorcisms.

The investigators were accompanied by a video crew on their visit to the Higginson Tower.  They are producing a documentary about paranormal activity.  Moore said that it will likely be available for streaming once complete.

The Higginson Tower was not OPRI’s first investigation locally.  In the summer of 2019, they visited the historic Macdonell-Williamson House in Pointe-Fortune and allegedly saw the spirit of a young girl who had died in the house.

When the documentary is complete, it could include footage of paranormal activity from the Higginson Tower.  When Moore was asked how people can find out if the tower is indeed haunted, “You’ll have to watch the show,” was his response.