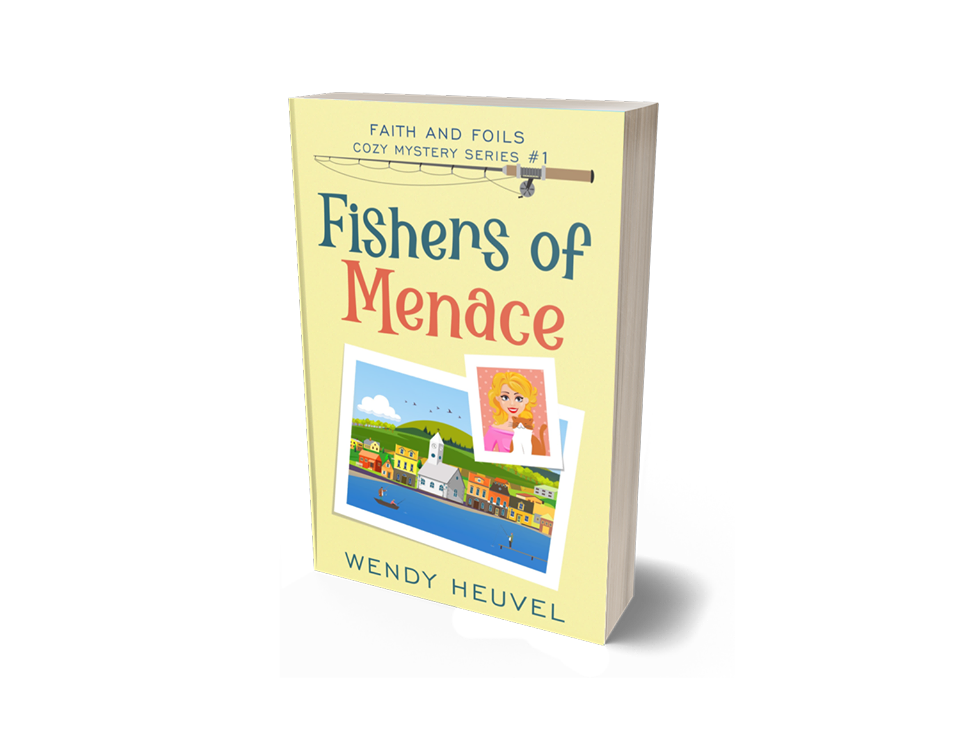 Fishers of Menace by Wendy Heuvel

“Welcome to Banford, where townsfolk are family, tea is hot, and murder is inevitable.” That’s the tagline for Fishers of Menace – Faith and Foils Cozy Mystery Series Book One, written by author Wendy Heuvel of Spencerville.

“This book has been a long time coming,” says Heuvel of her debut novel. “I’m excited to finally share this cozy mystery with readers.”

Cozy mysteries, for those unfamiliar with the genre, are lighthearted mysteries with traditional roots. They often take place in small towns, have amateur sleuths, and contain a little bit of romance –  but are free of excessive violence and sexual content. The television show Murder She Wrote is often used as an example of a cozy mystery.

In Heuvel’s book, the sleuth is the spunky Cassie Bridgestone, a young woman in her twenties who runs a primitive country store in the village of Banford. Cassie is forced into the role of sleuth to help a friend wrongfully accused of murder.

Readers may notice similarities between Banford and Merrickville, the inspiration behind the fictional town. The Rideau River plays a vital role in the book, and readers will recognize other area cities mentioned, like Ottawa.

Fishers of Menace, a play on words from the phrase ‘fishers of men’ from the Bible, is a faith-based novel, however reviewers have stated it would be enjoyed by anyone who enjoys a good mystery.

Kimberly, an online reviewer known as The Crime Librarian says, “I was definitely impressed by what I hope will be a long running new cozy mystery series that mixes faith, small town charm, and a little bit of murder.”

Laura K., a copy editor from Red Adept Editing adds, “Fishers of Menace is a cozy mystery with a sweet heroine, a lovely small-town setting, and a fishy mystery that will keep readers guessing.”

Wendy has written for more than 25 years, having been previously published in magazines, newspapers, and online. She was a finalist for the 2008 Christian Writers’ Guild’s “Canada’s Best New Christian Author” award and has also written hundreds of short drama scripts.

Fishers of Menace – Faith and Foils Cozy Mystery Series Book 1, released August 4th and is available in e-book, paperback and hardcover formats at all major book retailers online. Direct links to purchase and additional information can be found on Wendy’s website at: www.wendyheuvel.com/books