Joey Desjardins back on track for dream of Paralympics 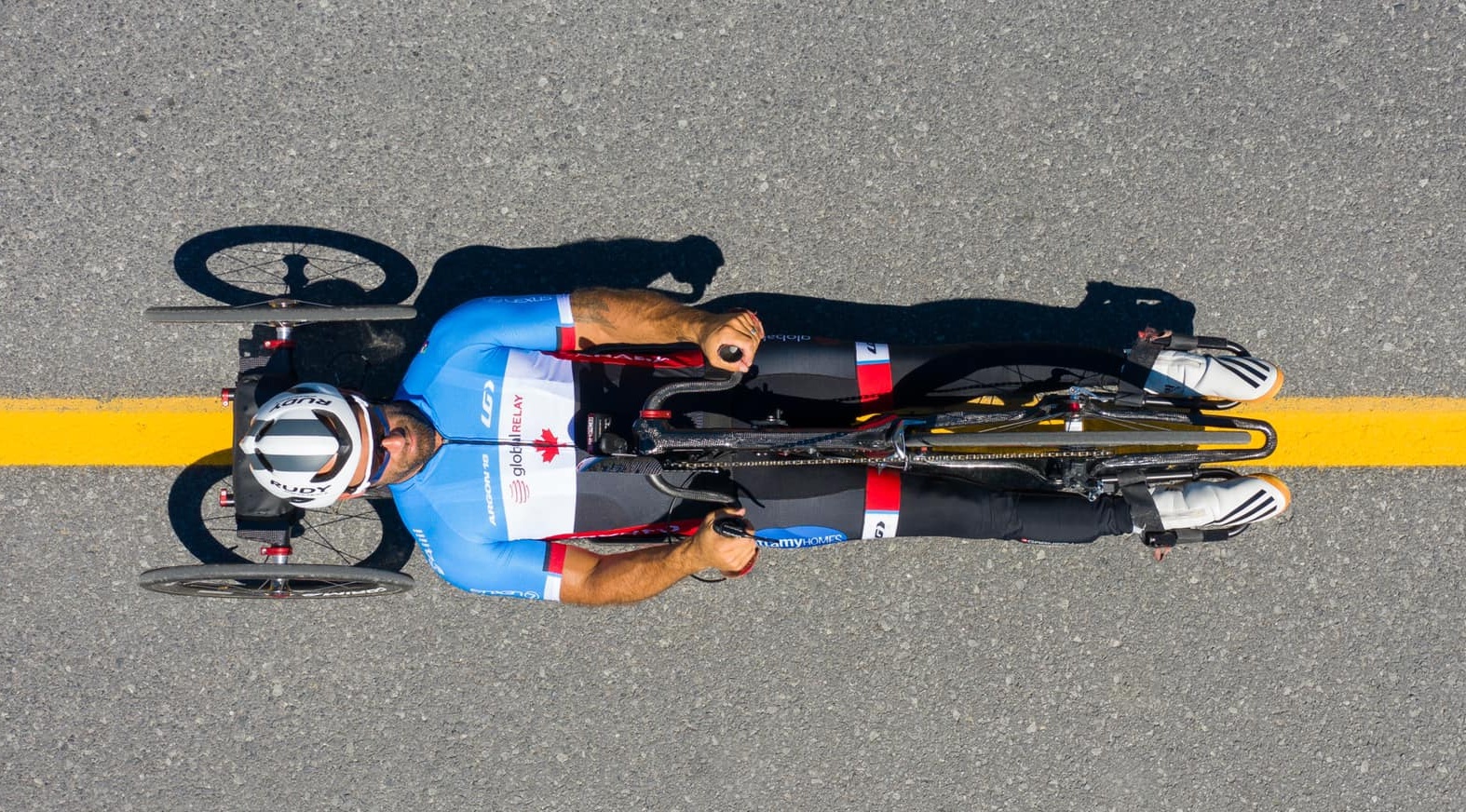 After having his 2020 Paralympic Games hopes delayed, para-athlete Joey Desjardins is finally able to get his handcycle back on track.

The Vankleek Hill athlete is back home after a week of training with Cycling Canada in Bromont, Quebec – the first time he has been able to join his teammates since the team was forced to suspend activities back in March due to COVID-19. The pandemic also scuttled all of the competitive racing events Desjardins had scheduled for this season, including qualifying for the 2020 Paralympics in Tokyo – now postponed until 2021. After training at home for the past four months, getting back on the track for head-to-head training with the team was a welcome return to semi-normalcy.

“It was nice to be able to chat and see familiar faces again,” said Desjardins, noting the end to the team’s training came suddenly. “We were all gone to Hawaii for training camp and then four days into it from one day to the next it was no one’s going home, everyone’s going to stay. Then the next day all our flight tickets were booked and we all headed home.”

Upon his return home, the married father of two young girls opted to focus on his family and let his body rest and heal from the duress of competitive cycling.

“I just took two and a half months to do whatever I felt like on the bike, kinda change the routine up a little bit and spend time with the kids – I think that was the best part of it,” recalled Desjardins, who started to ramp his training back up about halfway through the break. “My body is responding really well to the time off and now I’m able to put a lot more energy back into it, so it’s good.”

One of his regular training routes when at home is along Cassburn Road between Vankleek Hill and L’Orignal and Desjardins is often spotted by people living and driving in the area. After one recent training session along his regular route he was surprised with a medal presentation for his efforts by wife Vanessa and two daughters Stella and Zayla – not Paralympic gold, but perhaps even more special.

The return to training by the Cycling Canada team this month was quite different from training sessions held before the pandemic began, due to the need for social distancing along with constant screening and testing of the athletes, coaches and support personnel.

“A lot of screening, a daily questionnaire to make sure everyone is respecting the guidelines and a temperature check in the morning, so that if someone does appear to have any symptoms they can isolate and try to figure out where it came from,” said Desjardins, who was happy to deal with the regulations if it meant getting back on the track.

The Canadian Paralympic hopeful is on the verge of qualifying for the games in the highly competitive Men’s H3 category – one of five handcycle divisions which are determined by the extent of hand movement possessed by the participants. The H3 group in which Desjardins competes has the greatest number of entries of any division and Desjardins is one of Canada’s top three hand cyclists vying for a spot on the team in that category. Canada can send five paracyclists in total to the games from all divisions, including handcycle, upright, trike, and tandem categories.

“I’ve made the qualifying talent pool, from which they choose which athletes go,” Desjardins said. “There are three people in my category all gunning for the same spot – there could be two, there could be three (from his division), it’s all up to the committee. To take three of us from the same category is a big push, but it all depends on how close we can come to getting a medal and who is the better medal contender in the end.”

Canada is very strong in H3, notes Desjardins, and the closeness and strength of competition on the team has pushed all of them to greater heights.

“I think that’s what makes us so strong (in H3), because when we train together we are in the same category with the same kind of power outputs, so we can kind of push each other more compared to other nations. It’s a strong category for Canada, but it’s also the biggest category internationally. Last year at one World Cup event we had 56 competitors in a road race and that blows out any other category as far as the number of competitors.”

The level of competition and dream of Paralympics competition was not even on the radar when Desjardins first took up the sport of handcycling after his injury in 2009. He rode for fun up until 2013 “because I loved to do it”, before beginning to attend competitions after he discovered there was a national team. It was then the budding para-athlete met with coaches and trainers who gave him advice on how to progress to the next level. By 2016 Desjardins was getting noticed by Cycling Canada.

“Four years back in Montreal I remember the head coach actually doing one lap with me around the race track where we had a competition at the Gilles Villeneuve circuit and I was like ‘oh, this coach is actually taking interest in me’ and today he’s my full-time coach – just to look at that progression, it’s big,” recalled Desjardins, who added the sport has helped him realize dreams he would have never thought possible. “Sometimes I take a look back and realize where it’s gotten me. It’s funny – you never know where it’s going to go.”

Desjardins has been helped along the way by his many sponsors, all of whom are listed on his Facebook page. He also recently added a new sponsor in Red Dog Digital in order to assist with visual and online marketing. 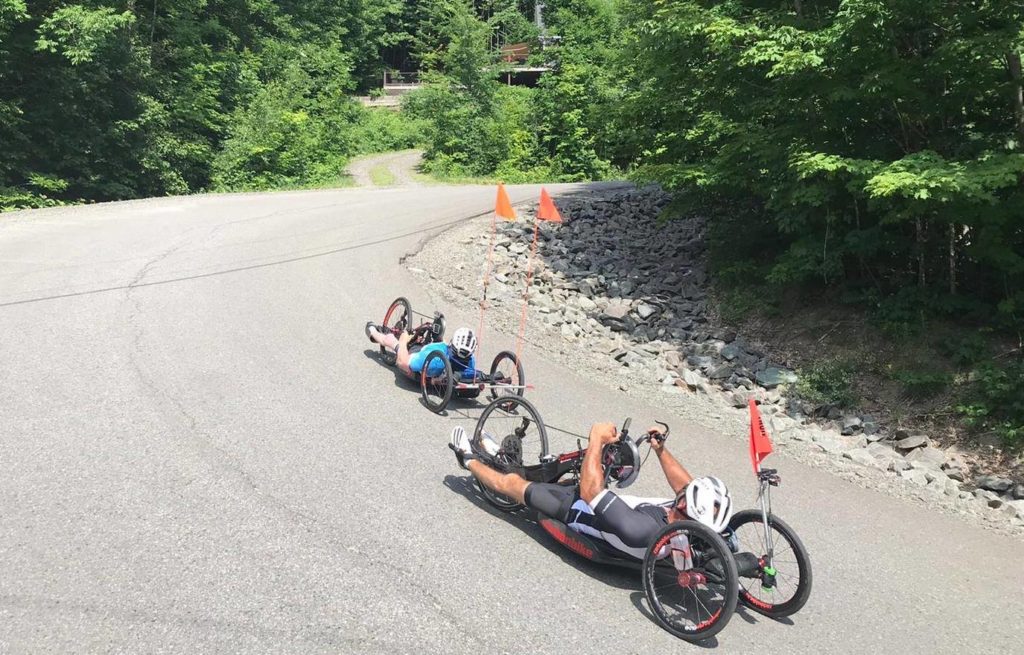 Vankleek Hill’s Joey Desjardins (in black) and a teammate climbing Mount Shefford at a recent Cycling Canada training Camp in Bromont, Quebec. The climb is more than 300 metres in elevation, providing a stern test for the athletes.