There were ten active cases of COVID-19 throughout the territory of the EOHU on July 21.

Two COVID-19 patients from the territory of the EOHU were in hospital on Tuesday, and no patients were in intensive care.

The number of deaths due to COVID-19 within the EOHU’s jurisdiction has fortunately remained unchanged at 11 for seven weeks and there are no active outbreaks of COVID-19 at any long-term care facilities or other group living institutions within the EOHU`s territory.

The EOHU, in partnership with the five hospitals within its territory, and paramedic services in Prescott-Russell and Cornwall-Stormont, Dundas and Glengarry, operates six public COVID-19 testing and assessment centres.  They are in Hawkesbury, Alexandria, Casselman, Rockland, Cornwall, and Winchester.  As of July 21, 24,413 people had been tested at all six facilities.  Home testing for people who cannot visit one of the facilities is also being provided by paramedics.

EOHU Medical Officer of Health Dr. Paul Roumeliotis is completely against colour-coded bracelets that have been advertised that are meant to indicate the level of physical distance or contact an individual is comfortable with.  The red, yellow, and green rubber bracelets are meant to show if the wearer is inviting physical contact or not, with red being no contact allowed and distance required, yellow allowing some contact, and green allowing all contact and no physical distance.

“I think that`s inappropriate,“ said Roumeliotis, who noted that even though the region is included in Ontario`s recently started stage three of reopening, masks and physical distancing are still required.

Roumeliotis said he has heard of some bracelet sellers stating that a portion of the purchase proceeds would be donated to a local hospital.  As of Tuesday, the Town of Hawkesbury and the Township of East Hawkesbury had circulated social media posts telling citizens not to use the bracelets.

Recent statistics have shown that more cases of COVID-19 are being diagnosed in adults in their 20`s and 30`s.  Roumeliotis said this trend has been observed in the EOHU`s jurisdiction as one of the new cases was in an individual in their 30`s.  Indoor seating is now open at bars and restaurants in Ontario, but physical distancing and mask rules still must be followed.  Roumeliotis is admittedly concerned that indoor dining and drinking could lead to higher infection rates.  As Medical Officer of Health, Roumeliotis could issue a special order to close indoor dining at restaurants and bars under EOHU jurisdiction, but he said he would prefer to let the provincial government take the lead and then see what its effects are locally first.

Since masks at all indoor public places within the EOHU`s territory became mandatory on July 7, the health unit has continued to receive phone calls and messages both in support and in opposition to the requirement.  Roumeliotis said that the majority of the messages have been in appreciation of the decision while the number of complaints that mandatory masks are supposedly a violation of civil liberties has declined.

No fines have been issued by enforcement agencies within the EOHU`s jurisdiction for non-compliance with the mandatory mask requirement.  Roumeliotis said that he continues to prefer an educational approach to mandatory masks and that if fines are issued, they will be given to the owners of public facilities rather than individuals.

There were 120 COVID-19 patients in hospital across Ontario on July 21.  Out of those 137 patients, 36 were in intensive care, and 23 patients were on ventilators.

Active and resolved COVID-19 cases under EOHU jurisdiction as of Tuesday, July 21, 2020. 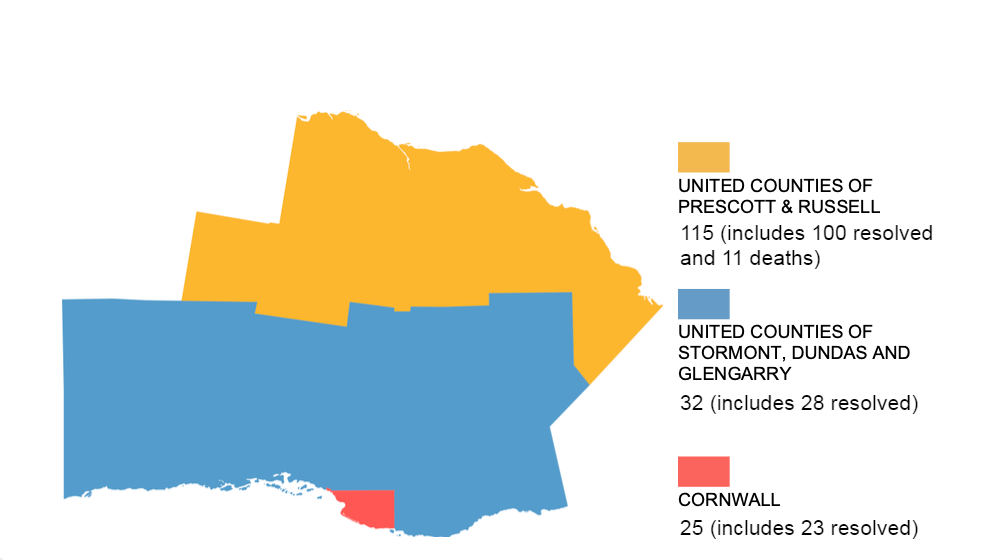