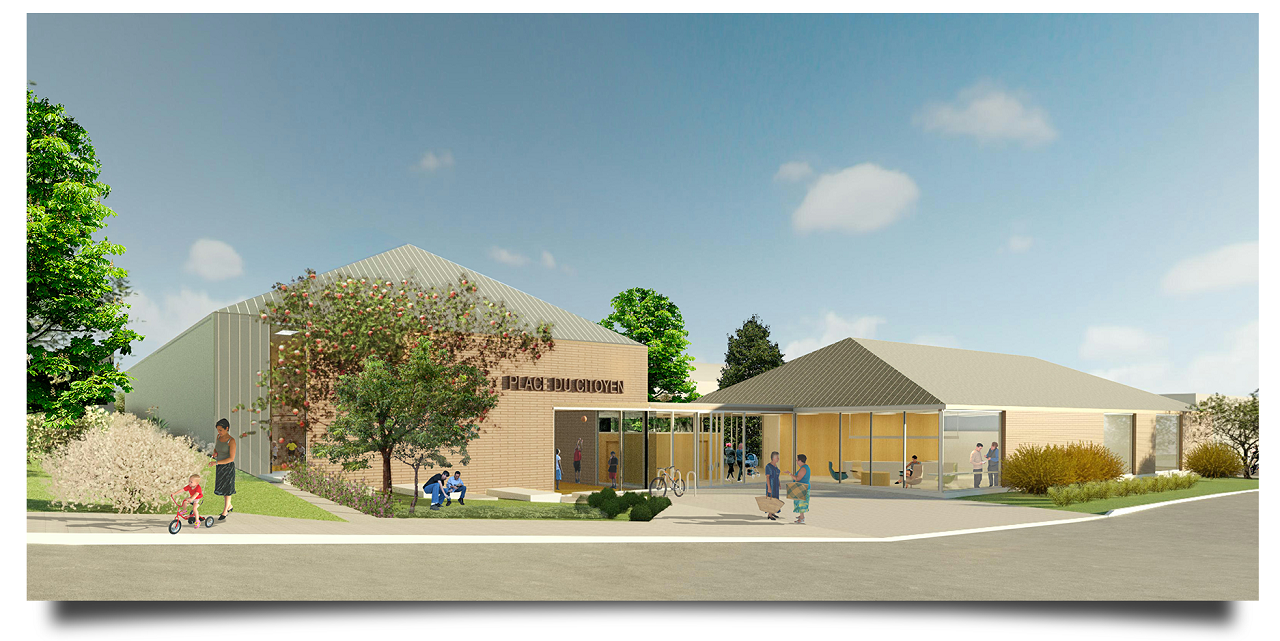 On July 2, an online information session was held by the municipality of Brownsburg-Chatham for the Place du citoyen, a 16,000- to 18,000-square-foot complex that will contain a public library, gymnasium, and multifunctional rooms.  The facility would be built on vacant land adjacent to the arena and rue des Érables in Brownsburg.

Brownsburg-Chatham Mayor Catherine Trickey said that the project is part of the municipality’s strategic plan that includes an effort to renew the centre of Brownsburg.

Building the Place du citoyen is seen as a way of attracting other business development to the area.

“We’ve talked to the people and developed a plan for a multifunctional facility,” said municipal Director-General Hervé Rivet.

Project Manager Jonatan Bouthillier of CIMA+, the firm hired by the municipality to manage the project, explained that CIMA+ was given its mandate in the fall of 2019 and requests for proposal (RFP) were solicited for the architectural design during the winter of 2020.  A consortium led by Montréal architect Pierre Morency was selected to develop various designs.  Development specifications and a final concept will be selected in the fall of 2020.  Construction tenders will be solicited during the winter of 2021 and construction will begin in 2021 and be completed in 2022.

Morency explained the four options, currently labelled A, B, C, and D.  All options include a library with community rooms of various sizes, or adjustable sizes with partitions.  Options C and D include the possibility a small auditorium space to be added later.

Option A would have an area of 16,146 square feet.  The area for options B and C is 17,222 square feet, and Option D’s area is 18,298 square feet.  Morency said that the designs were developed with the intent of optimizing the use of available space.

According to Rivet, the municipality is borrowing the amount required to pay for its portion of the project, which will be repaid over 20 years.  Using an average property value of $200,000 as an example, Rivet explained that the project will cost each taxpayer an additional $17,08 or 0.8 per cent more in 2022, but in 2023, the amount will decrease to $12.11 or 0.3 per cent more.

“However, like any real estate investment, if the tax base of the buildings in the perimeter of the town centre increases by five per cent in the six years following the project, the new income will absorb, in theory, the costs of the loan,” Rivet explained.

He said that any increase in value of the tax base makes it possible to reduce or freeze the amount being requisitioned from taxpayers.

Originally, the municipality was planning an $8.8-million Place du citoyen that would have been 36,000 square feet on two levels, instead of the the 16,000 to 18,000 square foot, single-level project now being proposed.

An online poll taken during the presentation favoured Option D, the largest and most expensive of the four, at 76 per cent.  Option B was a distant second at 17 per cent.

“Council is not committed to a precise date to make a decision,” said Rivet in reference to which option will be selected and when.  He said that about three months will be taken to discuss the options first.