Organizers are thrilled that they surpassed their goal of $40,000 for the annual Beau’s Walk for Ovarian Cancer — which went virtual this year, due to the ongoing pandemic. Seen here are members of the Beauchesne family, the Cowan family and Courtois family. There were 179 participants at this year’s event. Walkers/runners did the walk on their own terms and participants received pedometers as part of their goodie package. (photo courtesy of Beau’s)

Beau’s Brewing Co. put on its 6th annual 5K run/walk for Ovarian Cancer Canada this past weekend, on Saturday July 4. The event had 181 participants and raised $42,388 for the not-for-profit dedicated to helping women affected by this cancer. Typically, the 5K is an out-and-back course on Newton Road in Vankleek Hill, starting at Beau’s Brewery and returning back for a cold beer on the patio.

This year, event planners took into consideration the social distancing requirements of COVID-19 and created a virtual run/walk that could have participants anywhere in Ontario. The key to making it work was the race kit, which includes a digital pedometer so participants could track their distance anywhere they wished. The race kit also included the traditional post-race reward: a can of Beau’s Lug Tread. Participants got creative, finding ways to swim, jog, walk, race the distance; uphill, on trails or in neighbourhoods, as far away as Los Angeles and Tennessee. The lead-up fundraising included a virtual online fundraising concert from Ottawa music scene veterans Jim Bryson and Chris Page.

Beau’s co-founders Steve and Tim Beauchesne both participated in the event Saturday morning. “This time, because of the COVID crisis, we had to do this a different way. We are amazed that we were still able to raise so much money, and we thank everyone for the incredible support. This really demonstrates that as a community we can really rise above and defeat anything, including ovarian cancer,” says Steve Beauchesne. 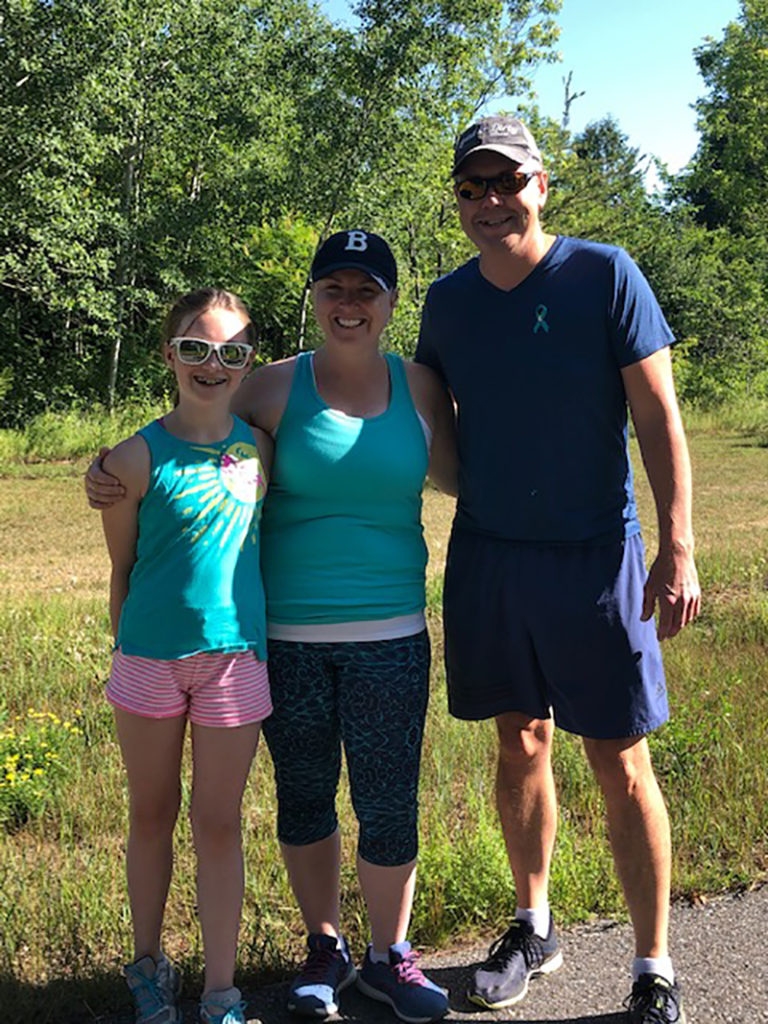 Neil Emberg and his family participated in the Beau’s Walk for Ovarian Cancer on July 4.

The top fundraising team was Laurie’s Legionnaires, captained by Kaitlyn McKay. The 12-person team raised $13,080 in honour of Laurie McKay-Levac. Second place was Team Diane Deans, captained by Ottawa City Counsellor Diane Deans who completed a round of chemotherapy for ovarian cancer this spring. The top individual fundraiser was Shanna Delorme, sister of Ashley Courtois (Cowan) who was the inspiration for the first Beau’s 5K back in 2015. Second in individual fundraising was Jenn Pritchard of the team Michelle’s Bells, raising funds in honour of Michelle Vachon.

“These funds are so much needed, especially in this crisis time we are living in,” says Elisabeth Baugh, CEO of Ovarian Cancer Canada. “Beau’s has pivoted so quickly to take this and turn it into a virtual event to honour the memory of Ashley. The money will go towards support and research to ensure that women can live fuller, better and longer lives when they are diagnosed with ovarian cancer.”

The Beau’s 5K for Ovarian Cancer Canada was started in 2015 by Beau’s employee Judith Sauve for her friend Ashley Cowan. The event started small but grew each year during Ashley’s three-year battle with ovarian cancer. Ashley succumbed to the cancer in 2018, but Beau’s continues the event along with the Cowan/Courtois family each year in honour of Ashley’s wonderful strength and spirit, and her love of running. To date, the event has raised $207,388. 100% percent of participation fees goes to Ovarian Cancer Canada.