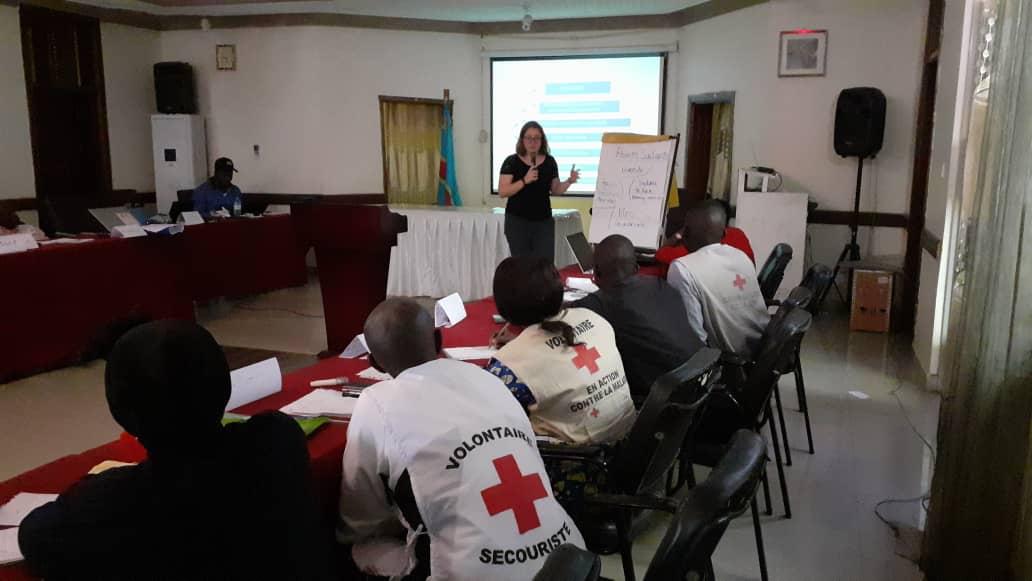 Vivienne Walz is seen here at a facilitating workshop; these workshops took place in Goma and Bunia in the Democratic Republic of Congo.

In the middle of a coronavirus pandemic, Vivienne Walz returned to Canada after spending several months working in the Democractic Republic of Congo (DRC). Walz was part of a Centers for Disease Control and Prevention (CDC) team working there to combat the Ebola virus.

Walz, who had been living in Atlanta, Georgia, was part of the CDC response to the Ebola outbreak which surfaced in August 2018 in DRC. She spent time in Goma in August 2019, and returned to work there at the end of October through December 2019, then returned at the end of January and was there until March 2020, spending about five months in all working there.

Walz did not work on the vaccine team, but was part of a community feedback strategy. She worked on the Social and Behavioural Sciences and Community Engagement Task Force and worked closely with the International Federation of Red Cross and the Red Crescent Societies and the DRC Red Cross (two organizations working together as part of the Red Cross movement to support the DRC Ministry of Health’s Ebola response). The main focus of her deployment was capacity-building for feedback analysis.

As Walz analyzed comments from the public, she looked for common ideas and her goal was to identify the need for actions or to see what elements of the Ebola response were working. But beyond that, Walz’ main mission was to develop training materials and train the local DRC Red Cross volunteers to do what she was doing, in order to allow the work to continue after the departure of the CDC and the International Federation of Red Cross (IFRC). The IFRC responds to crisis and the CDC supports the IFRC in its work.

It made sense to train the local volunteers as they are closer to their communities and further: the transfer of knowledge and how to take feedback data and find the main points are important to determine successes and actions required.

This was the 10th and largest Ebola outbreak in DRC, and the second largest outbreak of Ebola ever recorded since the virus was discovered in 1976 in DRC, according to the CDC website. (There has since been an 11th outbreak in Mbandaka, DRC.)

Community engagement was a key strategy to gather information and to disseminate information to residents. While health authorities learned from residents, they were also at work to gain acceptance to response intervention, says Walz, who compiled the information and comments gathered in the field.

While there are many avenues of communication, speaking with people is still the main way to collect information, Walz said.

“Not only did we want to prevent people from being infected, but we were able to dispel myths around Ebola treatment,” Walz says, adding that the feedback from volunteers was given to different parts of the team so that everyone could use the information. The community engagement also involved attending events and speaking with members of organizations. With the COVID-19 situation evolving globally, workers began including information about that illness when they were going door-to-door.

Walz’ job was to support the analysis of the information and feedback. Information collected was written down, but those doing the door-to-door visits also spoke with people about key messages. All of the information collected became part of a database and before arriving in Africa, Walz had spent several months working on the community engagement project at the CDC in Atlanta, preparing for the on-site analysis part of the initiative.

The flow and change which developed during the information gathering was ongoing, Walz said.

“It helped shape how our people were communicating about Ebola and enabled us to change our response when needed,” Walz says. 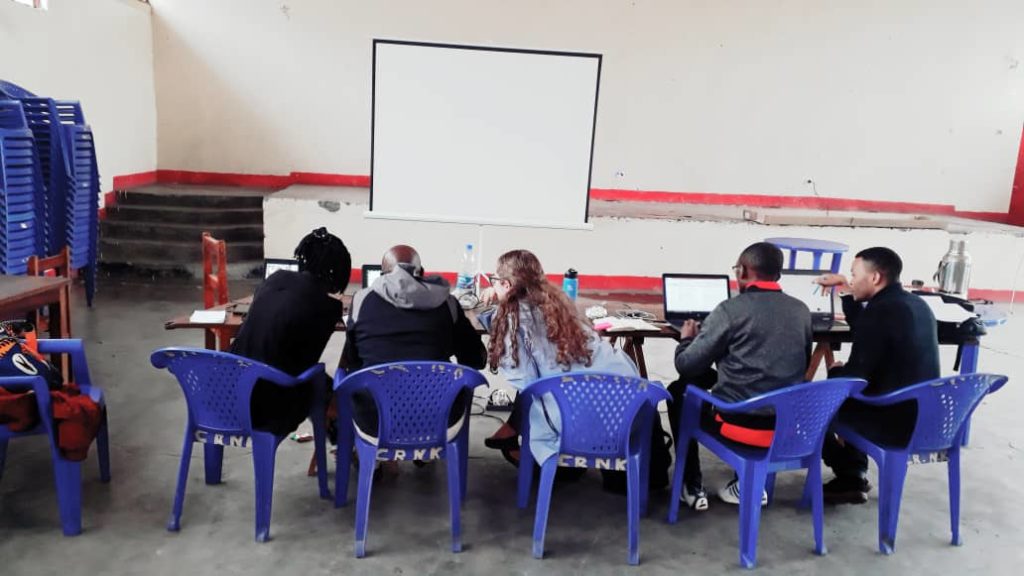 Vivienne Walz is seated at centre during a facilitating workshop.

She shared a powerful example. Burials were important to people and early in the Ebola response, Walz said that the deceased were collected in body bags but from community feedback, authorities ultimately realized how disturbing it was for family members to not see their loved ones at a time of loss.

The collection practice was for health reasons, to contain the infection. But to reduce people’s stress and feelings of loss, the design of the body bags was modified to include a transparent portion so that people were able to see their loved ones.

Walz has a Master’s of Science in Public Health and worked for the Centres for Disease Control since August 2017. She began work there as an Evaluation Fellow and was a Health Scientist from July 2019 until May 2020. After her return to Canada, she completed the project with the CDC via telework, but recently accepted a position as a Community Health Plan Liaison with Onkwata’karitáhtshera, Kahnawake’s sole health and social service agency  in Kahnawake, Quebec. She says she is happy about working closer to her hometown of Vankleek Hill.

Ebola virus was first discovered in 1976 near the Ebola River in what is now the Democratic Republic of Congo. Since then, the virus has been infecting people from time to time, leading to outbreaks in several African countries. Scientists do not know where Ebola virus comes from. However, based on the nature of similar viruses, they believe the virus is animal-borne, with bats or nonhuman primates with bats or nonhuman primates (chimpanzees, apes, monkeys, etc.) being the most likely source. Infected animals carrying the virus can transmit it to other animals, like apes, monkeys, duikers and humans. (From the CDC website) 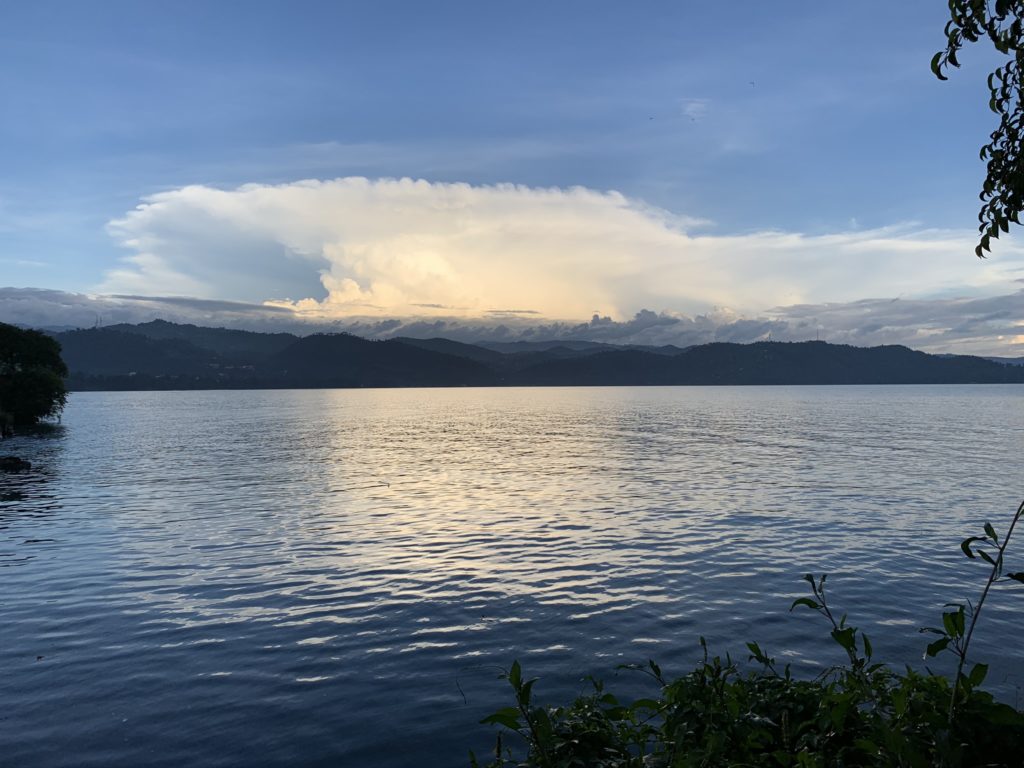 Walz said the landscape was beautiful in the Congo. This is a photo of Lac Kivu.