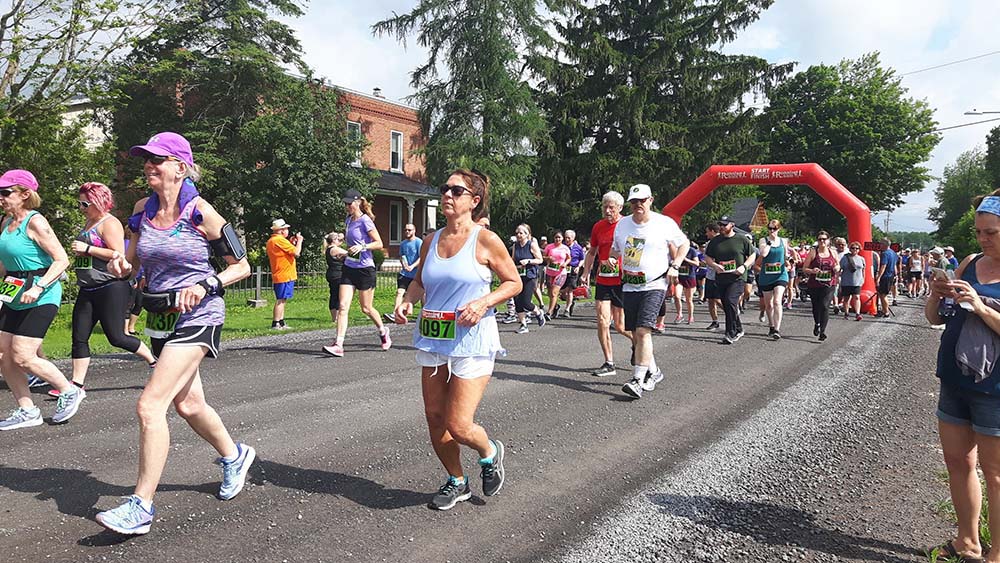 Participants in the 2019 Beau’s Walk/Run for Ovarian cancer are seen here leaving the starting point on Aberdeen Road. In 2019, the event raised $50,000.

The Beau’s 5K for Ovarian Cancer Canada is set to take place July 4 with a social distancing twist this year which organizers are hopeful will not only allow them to raise funds comparative to previous editions, but also promote increased participation in the future.

The event is inspired by Vankleek Hill’s Ashley Courtois (Cowan), whose friends and family started this race when Ashley was diagnosed with ovarian cancer in 2015. Although Ashley lost her battle with the disease in 2018, the Beau’s 5K has continued in her memory,  raising a total of $165,000 over 5 years – including a record $50,000 in 2019.

With social distancing guidelines still in place, this year’s edition of the Beau’s 5K will be a ‘virtual walk/run’, with participants running or walking their respective 3K, 5K and 10K distances on their own, instead of gathering at the brewery to start the event. While the social aspect of the event will be greatly missed, organizer Jen Beauchesne says the change might actually promote even more participation than usual and organizers are optimistic they can match last year’s total. They are off to a great start with $7,000 already raised as of June 8.

“One of the things we realized after making the event virtual was that we’ve always been a little bit limited (to greater participation) because you really have to be within driving distance of the brewery to participate,” Beauchesne noted. “But this year that’s actually not an issue.”

While the 2020 edition of the Beau’s 5K will be virtual only, Beauchesne pointed out that even when the event is able to return to its previous format, the virtual aspect will most likely remain. With the combination of both the group event at the brewery and virtual participants, the event could be greatly expanded in the future with the opportunity to participate open to everyone whether they live near the area or not.

To make taking part in the 2020 event even easier, organizers are providing a pedometer as part of this year’s sign up package. The entry fee to this year’s Beau’s 5K is a $40 tax-deductible donation to Ovarian Cancer Canada and particpants can sign up on the brewery’s website by clicking on the link at the end of this article.

Those who sign up will later receive an email directing them to Beau’s online store where they will be able to select and enter the information required to have the pedometer shipped to them. There may also be an option to pick the pedometers up directly at the Brewery.

Beauchesne noted that in addition to fundraising, increased awareness on the subject of ovarian cancer is an equally major objective of the event and was extremely important to Ashley. And during the current COVID-19 pandemic, the aspect of awareness is more critical than ever.

“It is extra difficult with COVID to get information from your doctor; it’s difficult to connect to communities,” Beauchesne commented. “The importance of access to community resources and people who can support you through your journey when you are affected by cancer is incredibly important and right now it is very difficult to access these services.”

Beauchesne noted that it is in times like this that that organizations such as Ovarian Cancer Canada become even more essential.

“This entire experience for everyone has been so isolating that I think the work that Ovarian Cancer Canada does in terms of creating virtual communities for people affected by the disease is especially important right now and if this becomes the new reality it’s going to be increasingly important to offers support and conversations in a digital or virtual way,” Beauchesne said, emphasizing the Beau’s 5K event is very proud to be supporting the organization. “They offer resources and a community that people can tap into – otherwise you’re kind of on your own.”

To help raise funds for the event Beau’s is also hosting a benefit concert on June 17. The concert would ordinarily be held at The Windsor Tavern but this year it will be online in conjunction with the Windsor’s Strings sans Wings Facebook group. The concert will be posted live on the Beau’s website page for the Beau’s 5K and will feature Ottawa musicians Jim Bryson and Chris Page each performing a set.

For more information on the Beau’s 5K for Ovarian Cancer Canada or to sign up as a participant you can use this link: https://beaus.ca/ovarianrun/