Cloth masks to protect local people: Donna Murray had that all sewn up, making and donating more than 700 masks in recent weeks 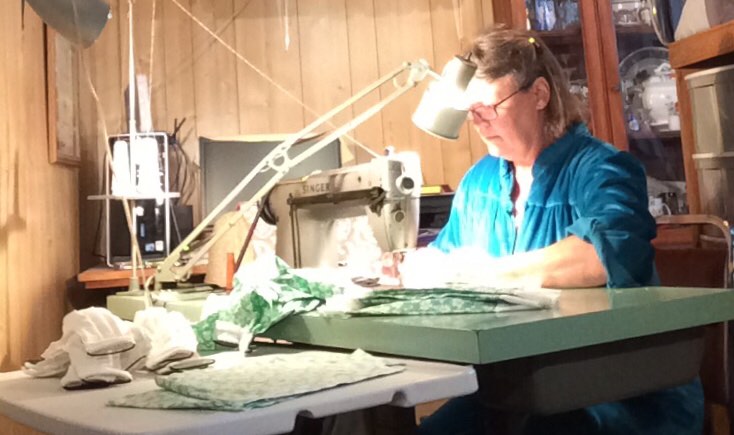 When she first had the idea of sewing homemade face masks for people who needed them, Donna Murray thought she would be making perhaps a few dozen for family, friends and other people from the Vankleek Hill area. She had no idea at the time how popular they would be.

After starting out with virtually no supplies and no pattern, Murray has now completed and given away more than 700 masks in the short time she has been creating them. It’s a number that Murray describes as almost unfathomable, particularly given the fact she started out with almost no supplies for the project when the Covid-19 restrictions were first announced.

“When this all happened I didn’t have any supplies (for mask making). I had some material, but no elastics,” Murray says, noting that she ordered elastics, but they never arrived. “So I went to Plan B and used pony-tail ties.”

The pony-tail elastics required modifications, but they were suitable for the task and obtainable. With those in hand, Murray started working on a mask design: “I used to work in Alexandria at the hospital so I know what the masks feel like.”

Àfter a few tries, Murray was able to come up with a suitable design and started making some masks. When she told a few people of her idea requests for masks started arriving in bunches. Fortunately, so did extra supplies.

“As soon as my friends knew, they all started donating material for the masks,” Murray says. “Which was a good thing, because I had a lot of requests.”

Included among those were requests from the local food bank and Meals on Wheels for masks to provide for their volunteers. Additional inquiries were received from some local health care workers, from area businesses and from local residents who needed to go out in public. While some of the masks have been distributed out of town, Murray says the vast majority have gone out locally.

To avoid contact with people coming into the house, Murray has been distributing the masks often in an unusual fashion; by putting them in a picnic cooler in front of the house for people to pick up. “I almost feel like I`m doing something illegal,” she chuckles.

While she has enjoyed making the masks Murray intends to slow down — at least a little bit.

“I’m hoping to stop. I never intended to do this many, and then I thought I would stop at 500, but I`d get more requests,” Murray concludes, before giving a strong hint that her mask-making will mostly likely continue:

“Well, I guess I will go sew now until (husband) Keith gets home.”