Township delays due date of water and sewage charges; recycling processing costs go up by 36.8% 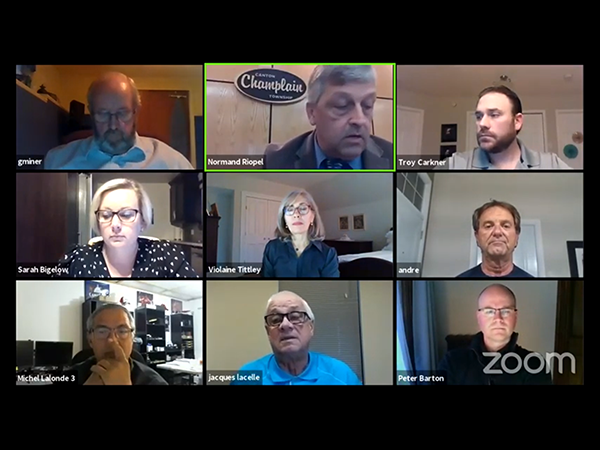 Champlain Township councillors have been holding meetings using Zoom, a virtual meeting room app, since the outset of the pandemic.

Champlain Township councillors held their first-ever meeting using the virtual meeting app called Zoom, to enable councillors and municipal staff to participate remotely. The meeting took place on April 9 and lasted just about half an hour.

Here are a few of the highlights from that meeting.

Although the current provincial state of emergency permits council to hold its meetings electronically, the limitations imposed on public meetings due to the coronavirus epidemic are having an impact on the township’s planning department.

A report from the township’s senior planner explained that electronic meetings, while permitted under the Municipal Act, may not be appropriate for decision-making on planning act matters “where there is generally more emphasis on notification, public participation and transparency.”

After obtaining legal advice, the report states that the planning and economic development department will suspend decision-making on a number of applications until the next council meeting or until additional guidance is provided by the province.

Applications which require public meetings including official plan amendments, zoning by-law amendments, minor variance and subdivisions would be processed, but no decision will be made until the emergency order is lifted or the government provides required changes to the planning act.

The list of affected applications includes: the following subdivisions: River Lane, Cliftondale, Levac, Ouimet, Prud’homme, Goyer and Habitation Robert (the latter is a proposed subdivision at the eastern edge of Vankleek Hill; it is now awaiting a rescheduled public meeting).

One minor variance is also affected at this time.

The payment of accounts totalling $2,341,364.22 in March was approved as part of council’s regular agenda package.

The contract for a new guard rail was awarded (for the L’Orignal Marina) but installation has been delayed due to the coronavirus epidemic. The Department of Fisheries and Oceans has extended the installation period to July 30 from March 31.

In the meantime, an email has been sent to clients advising that the regular opening which takes place usually during the Victoria Day weekend in May will likely be delayed.

A $4,000 grant has been received from the United Counties of Prescott and Russell for L’Orignal beach improvements. The parks and recreation department notes that work restrictions have been introduced to staff, including limited outings, one employee per vehicle, physical distancing and routine disinfection procedures.

During this time, positive messages have been created for the electronic sign located on the side of the Bruce Barton Fire Hall in Vankleek Hill.

Originally cancelled, the spring garbage collection will be rescheduled at a later date, according to a memo provided to council by Director of Public Works James McMahon.

In addition, Champlain Township has changed the bag limit for garbage from two to three bags per week during this time when many people are staying at home throughout the week. McMahon is asking residents to not put leaves in with regular waste at this time.

At a future date, the township’s landfill site will be open and residents will be able to take leaves, branches and other items there at no charge.

The open-dump days are delayed until further notice.

Champlain is also postponing the due date for water and sewage charges, moving it from April 15 to May 29, 2020. Further, penalty fees for water and sewer taxes will be suspended until June 1, 2020. Vankleek Hill Councillor Troy Carkner suggested re-visiting this decision at council’s regular May meeting.

The cost charged by Recycle Action Inc. per tonne to accept recycling rose from $95 per tonne to $130 per tonne as of March 1, 2020, council learned. Tricentris in Lachute charges $140 per tonne and Robert Lefebvre, who is the recycling coordinator (and a Town of Hawkesbury councillor), said that several processing facilities in Eastern Ontario were charging a rate of between $300 and $350 per tonne. (This cost does not include collection costs.)

In the minutes from the Joint Recycling Committee (participants include the Town of Hawkesbury, Champlain Township and the Township of East Hawkesbury), Robert Lessard from Recycle Action Inc. reported that the prices for various recyclable materials had stabilized since the previous month but that plastics were continuing to be a challenge.

The increase is being requested from all Recycle Action’s municipal clients, including the Township of Alfred-Plantagenet and The Nation Municipality. The minutes also indicated that the Village of Casselman will be banning certain plastics effective January 1, 2020, with the Nation Municipality considering similar action.