The Golden Circlet: a children’s tale of adventure with charms all its own 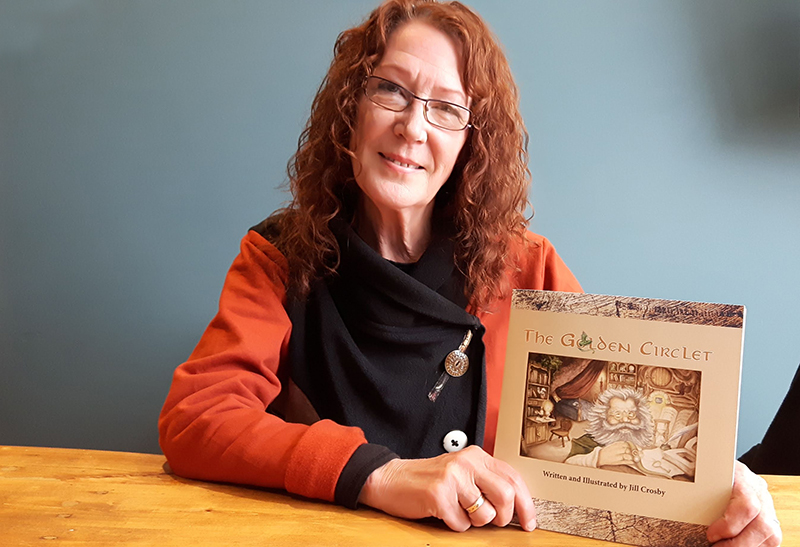 Maybe the message is: we are all heroes. Or maybe it is that we each have everything that we need inside us. But chances are, you will take away your own message from local artist Jill Crosby’s first book. What you need to know is that it is a story for children, about children. In fact, her grandchildren are among the lead characters in the book.

But wait. Nothing is as it seems. In some indescribable way, the story is for adults, too.

Dubbing it “Tolkien for tots”, Crosby relates that “The Golden Circlet” is a tale from her own imagination and it contains magic, dragons, wolves, bears, flying fish and quite a few things that cannot quite be explained.

But what began as a story that she told to her own two small daughters, making it about Crystal and Amber — evolved over the years and when, as a grandmother, she returned to the story years later, her grandchildren, instead of her daughters, figured prominently in the tale of adventure.

Crosby says she re-scripted it to include her five grandchildren, embellished the tale a bit and to cap it off, added more illustrations as she prepared her book for publishing. (She had already done a few related illustrations several years ago.)

“I knew what I wanted to do to illustrate the book; it was just a case of getting those images from my brain onto paper,” Crosby says. As the book started to come together, the more determined she became to make it a reality.

“It was a dream for so many years,” Crosby commented.

Her grandchildren, who range in age from five to nine years old, are pretty excited about the book, she says. While they have seen some of the drawings, they have only seen the outside cover of the book so far.

Crosby says the book is as much about teaching us all to face our fears, as it is about being kind and understanding that there is always a back-story. By being kind to someone, you might be able to change someone’s life, Crosby says.

“Just because someone is not like you doesn’t mean they don’t deserve empathy and kindness. And being a hero is nothing if you’re not loved.”

In addition to the life lessons to be found in the book, which is somewhat longer than a fairy tale, you should know that some of the characters in the book are based on local people. The all-knowing Dr. Crabtree, who has been around (“since the beginning of time”) is Crosby’s long-time friend, Peter Wass. And the Grandma Garden in the book is Crosby herself.

Crosby says she is still in a state of overwhelm after posting on social media about publishing her book. She had orders from her own social network for close to 150 copies before it was even printed. A second order is due to arrive next week, just in time for her official book launch and signing, taking place at Arbor Gallery Cultural Centre on Sunday, December 15, 2019, from 12 noon to 3 p.m.

Crosby is already thinking about her next book. The battles may be bigger. There will be a lot more going on because the children in the book will have grown a little older, she says.

The soft-cover book, which contains her own original colour illustrations, sells for $14.95. There are a few copies for sale at The Review offices at 76 Main Street in Vankleek Hill.

You can contact the author by sending an email to: [email protected]