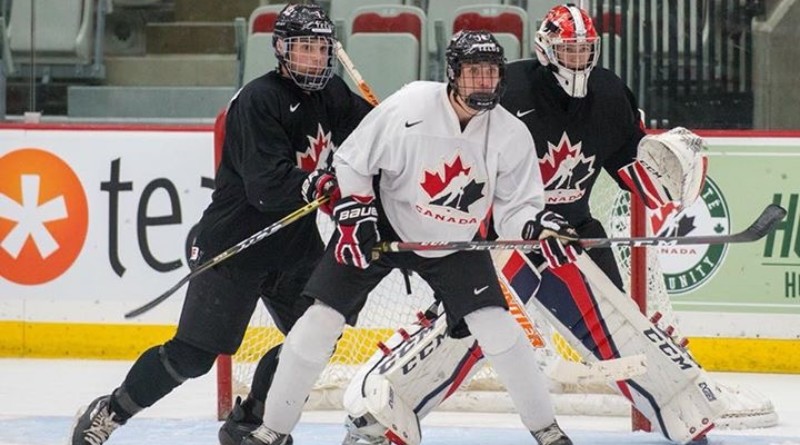 Seventeen-year-old Joe Vrbetic from Dunvegan has a promising and hopeful future in professional hockey.

When the four-year-old lad first set foot on the ice in Maxville, he probably never envisioned himself representing Canada on the world stage.  What usually remains a dream for most, became a reality for Vrbetic in 2018 playing in nets for Team Canada at the World Under-17 Hockey Challenge, losing in the quarter-finals against Sweden.

This year, Vrbetic has the privilege of playing in the OHL with the North Bay Battalions while completing his final year of high school.

“We’re pretty busy juggling school and hockey, but the league ensures that school remains the priority.  With that said, there were only 3 days in October that we weren’t on the ice,” said Vrbetic.

Only true lovers of the game would move 450 kilometres away from friends and family and move in with complete strangers.

“Being away from home is never easy.  I miss my family but it’s a choice I’ve made.  I’m grateful for my billet family’s hospitality.  They’ve been amazing,” said Vrbetic.

“We’ve given him every opportunity to play at all levels,” said Vrbetic’s father, Norman Jeaurond.  “But eventually when the phone started ringing and the league showed interest, we continued supporting him in hopes that he would keep working hard and make it far,” said Jeaurond.

“We are very proud of Joe.  And even though we’ve had our ups and downs over the years, we’ve supported him all we could up to this point, but as a 17-year-old, he needs to make his own choice moving forward,” said Jeaurond.

Vrbetic hopes his name will be called at the 2021 NHL Entry Draft.  It goes without saying that anyone who makes it to this level has sacrificed much, from years of dedication, countless hours of practice, grueling travel, finances and heart.  His success and promising future are clearly the result of everyone’s contribution over the years including Joe, his family, coaches and billets.

Vrbetic and the Battalions will be taking on the Ottawa 67’s, Sunday December 1st at 2pm at TD Place in Ottawa.  Tickets can be purchased at tdplace.ca