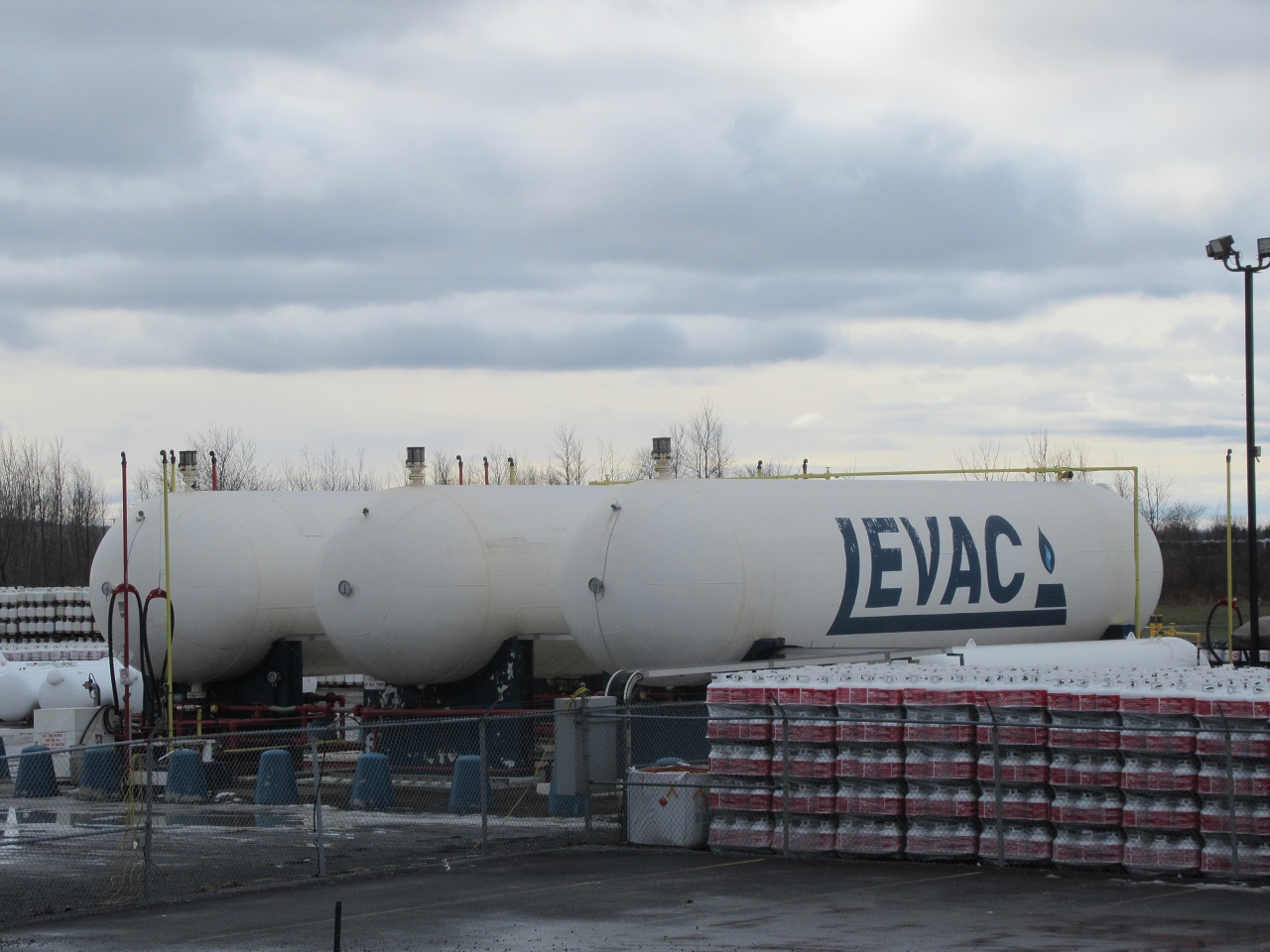 A strike at Canadian National Railways (CN), combined with poor weather and crop drying conditions has caused considerable problems for local corn farmers, drying facilities, and the propane industry.  Even though a tentative agreement has been reached between CN and more than 3,000 Teamsters Union members who are returning to work, the situation for harvesting and drying corn remains serious.

“It’s actually a disaster,” said Markus Haerle of St-Isidore, who is Chair of the Grain Farmers of Ontario (GFO).  Most of the propane used at elevators to dry corn and other crops is shipped by rail from Alberta.  The gas is a by-product of oil refining.

Haerle said all propane shipments by rail stopped on Wednesday, November 20.  He said a lot of corn is still in the fields because wet conditions have made it difficult to harvest. In fact, 20 per cent of Haerle’s corn crop still needs to be harvested and the dryer he has on his property cannot operate because there is no propane available.

Haerle said propane would likely not reach customers for three or four weeks after the strike ended.

The Canadian Propane Association (CPA), which represents distributors across the country, welcomed the end of the strike but warned that the impact of it could still be felt for several more weeks.

“We knew that the drastic reduction in rail support during the strike was going to impact the logistics in the immediate aftermath of the strike and now we are working diligently to get supply back to normal,” said CPA Chair Dan Kelly.

Haerle explained that 80 per cent of all propane used on farms is shipped by rail, and only 20 per cent of it can be trucked in from western Canada.  Haerle said the shortage could soon start to affect residential and commercial consumers who rely on propane for cooking and heating.

Levac Propane of St-Isidore did not respond to inquires about how business there is being affected.  The MacEwen drying facility in Maxville normally dries 1,000 tonnes of corn per day and uses Levac as its supplier.

MacEwen had enough propane to dry what was in its wet bin before it went bad, he said.  However, it will receive corn and beans again until the bins are full, with the hope that the propane supply returns soon.

Other local propane-fueled dryers in St-Isidore and Moose Creek are also shut down.

As for transportation alternatives, Haerle said it is technically possible for another national railway like Canadian Pacific (CP) ship propane, but it would be a “logistical nightmare” because all of the propane terminals are located along CN tracks.

Haerle said he has been in touch with CN executives about the situation and has spoken with Ontario Minister of Agriculture Ernie Hardeman and tried to make him understand the seriousness of the situation.

Other local elevators are not affected by the propane shortage.  Wilson Farms near Vankleek Hill uses Ottawa-based W.O. Stinson as its propane supplier.  Owner Kevin Wilson said Stinson trucks its propane to Eastern Ontario from a terminal in Sarnia while most industrial propane used locally usually comes from a rail terminal in Valleyfield.

Wilson Farms is taking wet corn from places that cannot process it.  Kevin Wilson said they normally dry 2,000 tonnes per day, but that amount doubled to 4,000 tonnes in three days.  The 23 employees at the facility are working around the clock to keep up.

An additional one million bushels of storage capacity was added this year at Wilson Farms.  However, the current situation has them short on space.  Kevin Wilson said they now must ship 15 to 20 loads of dried corn away each day in order to ensure there is room to receive more.

The high moisture content in this year’s corn crop is also slowing down the drying process.  Normally, Wilson’s dryer can process 160 tonnes per hour, but is currently drying only 110 tonnes per hour.

Splendron Farms near Vankleek Hill is also drying corn as usual because its fuel source is natural gas.

Owner Gloria Barton said their drying times are also longer because of the wetness of the corn.  She said the poor quality will eventually affect the quality of silage that gets used for livestock feed.

Another problem Barton mentioned about this year’s corn crop is the low bushel weight.  She said it will be difficult for farmers to get crop insurance for any losses because they are based on the yield amount, and not the bushel weight.

Haerle said he is working hard to find solutions for the 2,800 grain farmers he represents and is concerned about how they may react if the propane shortage continues.

Kelly noted that the CPA has a good relationship with the agricultural industry but emphasized that the shortage was caused by an interruption in transportation caused by the strike.

“The CPA will work with governments, the railways, and our stakeholder groups to ensure that the challenges that presented themselves as a result of the CN strike are not repeated in the future,” Kelly said.

During the past weekend, farmers protested the strike and propane shortage outside CN headquarters and Prime Minister Justin Trudeau`s constituency office in Montréal. 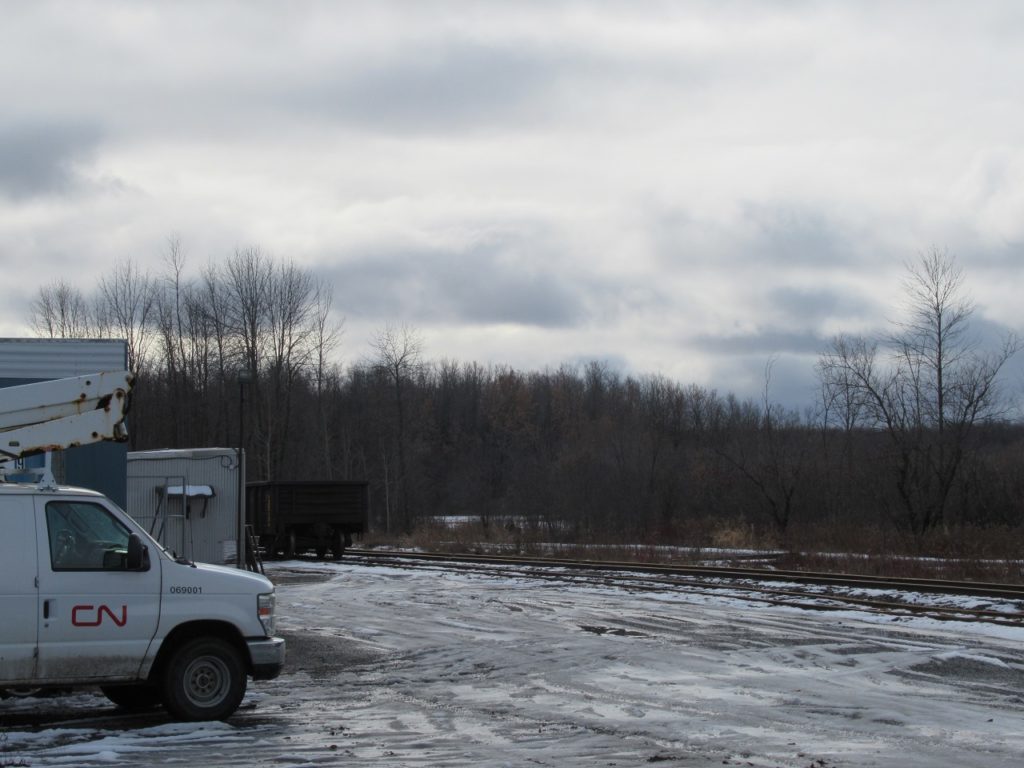 The CN yard in Vankleek Hill. A strike at the railway has caused a shortage of propane in eastern Canada. Photo: James Morgan