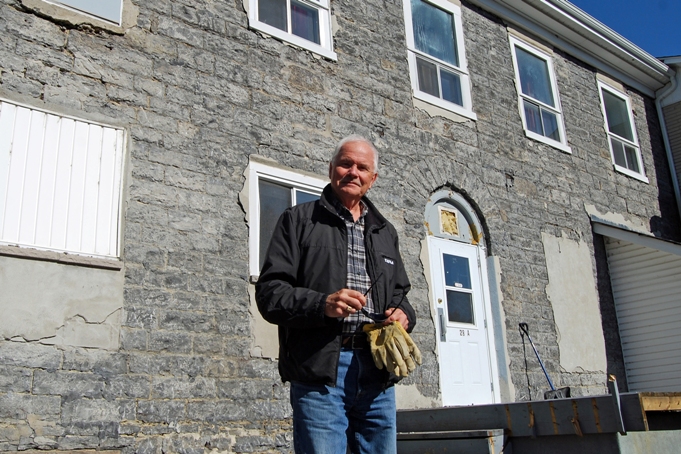 Archivist Allan MacDonald looks forward to moving the “treasures of our community” into the archives’ permanent home in 2020.

Purchasing an older building comes with moments of uncertainty.

“There have been some tense moments,” acknowledges archivist Allan MacDonald of the recently-purchased Macdonell House. The building, at 28 Kenyon Street in Alexandria, will become Glengarry County Archives’ permanent home in 2020.

Removing a decades-old layer of stucco from the building’s exterior required a leap of faith, since the condition of stone walls hidden beneath was unknown. MacDonald was relieved when the original grey limestone was revealed, intact.

“The Macdonell House will be transformed into the jewel it once was,” says MacDonald. The goal is to move the archives by September 2020.

Housing the county archives in the Macdonell House is a “marriage of heritage with heritage”, says MacDonald. Macdonell House is the oldest extant building in Alexandria, and one of the town’s few stone houses. It was built in the late 1830s after a devastating fire destroyed the site’s original house. The original owner was Angus Macdonell, who was among the county elite.

“This presents a rare opportunity,” says MacDonald, “to marry the history of this community with a building that is steeped in history.”

Macdonell House was purchased for $140,000 in July 2019, and is jointly owned by the townships of North and South Glengarry. Although the interior of the building retains little of its former domestic features, the grand space will provide ample public space and storage for the archives’ collections.

“The GDHS space was never designed to be an archives,” says MacDonald, of the current rented location in Glengarry District High School. The five former classrooms that comprise the archives’ space have none of the environmental control required for storing archival material.

The new location in Macdonell House will easily meet the long-term needs of the archives, according to MacDonald. Although requiring initial extensive renovation, at 8000 square feet, the building provides ample space for the archives’ growing collections.

The archives’ collection covers a broad swath of community history. At its core are the permanent records of local government—the townships of North and South Glengarry and their predecessor municipalities. Municipalities are legally required to keep those records and make them accessible to anyone in the community. Prior to the archives’ founding in 2013, these records were stored in multiple locations and some were neither organized nor easily accessible.

MacDonald has been Glengarry County Archives’ volunteer archivist since its inception. Before his retirement he spent 25 years at the Archives of Ontario. A professional archivist, MacDonald specialized in municipal records and later moved up to management.

Other than municipal records, the archives’ collections include records that reflect the history of the community. These include genealogical records as well as the records of local organizations including the Highland Games and fall fairs, service clubs, local businesses, and the Glengarry News.

“All these are part of the history of the community,” says MacDonald.

The Macdonell building had been owned since the 1920s by the Knights of Columbus and had undergone extensive renovations both inside and out.

Planned renovations will retain and restore some original features of the building, where practical. Windows and doors will be restored to their original size and location. The main floor will feature barrier-free space where the public can examine records. The second floor and basement levels will be outfitted for records storage.

Work is underway this month to sandblast and repoint the stone on one exterior wall; the remaining walls will be done in the spring. Over the winter months, interior renovations will become the focus.

Community fundraising is expected to cover the estimated $300,000 cost of renovations. A committee is steering fundraising efforts and, after less than three months, just over half that total has been raised.

The new archives’ building will feature a donors’ wall recognizing community members and organizations that supported the reno project. The wall will have several donation categories starting from $250.

Fundraising events are planned for early in the new year, but donations can be made anytime by contacting the archives.

“Right now the focus is on the building,” says MacDonald. 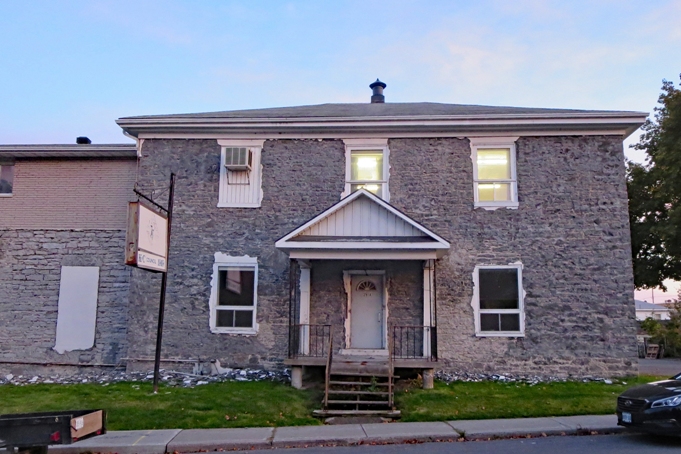 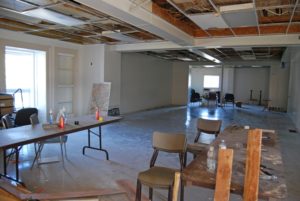 The building retains little of its domestic interior, but the open concept will lend itself to archives’ use.