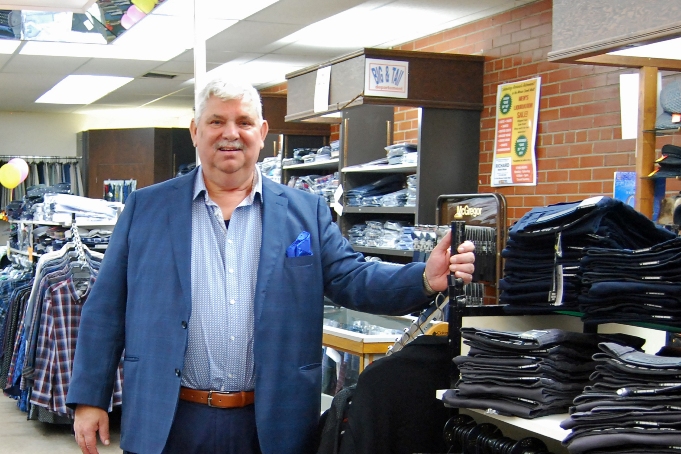 After 40 years selling men’s wear, Richard Théoret knows how to size a customer up quickly.

“Someone walks into the store,” says Théoret, “and I don’t even have to measure him to know his size. I can tell as soon as he walks in the door.”

Théoret plans to retire at the end of 2019, and his store, Richard Men’s Wear, will close.

“Six days a week is too much now,” says Théoret, who wants more time to enjoy his senior years. Théoret has four children, but after university they all went on to have successful careers of their own and there’s no one to take over the store.

Théoret was 25 years old when he opened the store in 1979 in the newly-opened Moose Creek Mall. The mall was a family enterprise, and Théoret’s mother and siblings also owned retail stores in the mall, housed in a former school.

The mall’s businesses are still prosperous, says Théoret and, if he wasn’t retiring, he’d be expanding. Théoret’s clientele come from Ottawa, Kingston, Valleyfield, and “all places in between.”

“There are very few stores like mine in the area,” says Théoret. “Chain stores have become the norm.”

Théoret’s customers often bought two or three suits at a time, along with overcoats, hats, and gloves. Suits are worn less often now, but Théoret’s sales haven’t diminished. With the number of stores selling suits on the decline, Richard Men’s Wear sees its customer base increasing every year.

“Small villages have a hard time keeping businesses going,” says Théoret. Customers are drawn to larger centres but, according to Théoret, the chain stores can’t compete with his store’s quality and level of service.

“We’re a full-service store,” says Théoret. “We sell custom suits, made to measure. And we do alterations and hemming on site, often while the customer waits.”

The wedding business has also evolved over the years. Wedding parties used to nearly always rent wedding wear but now it’s more common for them to buy suits. The wedding season has expanded to last all year round, and destination weddings call for less formal attire.

While the store will close by the end of 2019, Théoret plans to launch a limited line of clothing sales online, to serve his long-time customers. From now until Christmas, Théoret is running liquidation sales at the Moose Creek Mall store.

Many of Théoret’s regular customers are upset that Richard Men’s Wear is closing. Théoret says his customers have become like family to him over the decades.

“I’d like to thank them for their support all these years,” says Théoret. “I have many faithful customers. It’s been a real pleasure to serve them, a real joy.”