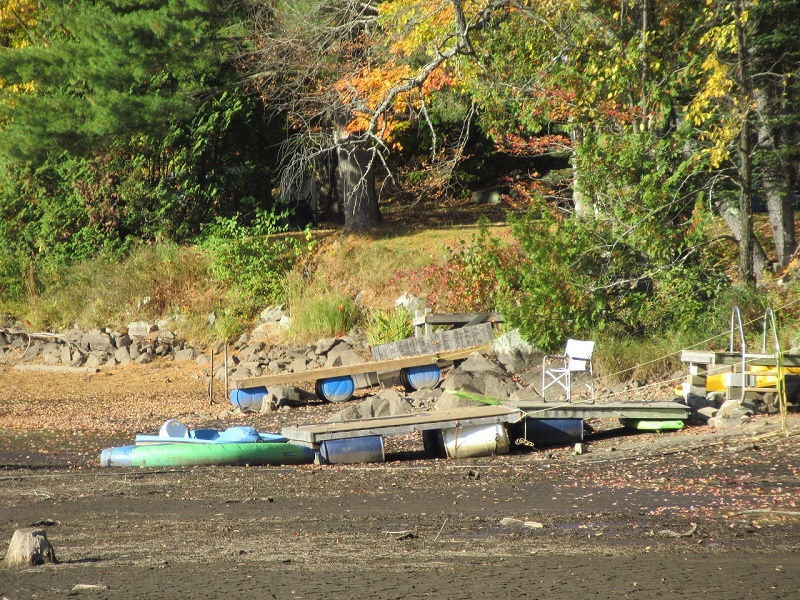 There is no fishing or boating happening from these docks on what is usually Lac à Campbell in Brownsburg-Chatham. The privately-owned dam on the man-made lake is being repaired, resulting in the lake being drained and reduced to a trickle of water through the middle of it. Photo: James Morgan

All of the water from Lac à Campbell in the Dalesville community of Brownsburg-Chatham has been drained, but the situation is only temporary.

That’s because the small lake is actually man-made and held back by a privately-owned dam on Rivière Dalesville which runs through it.  According to property owners Eric Sauvagneau and Melanie Matthews, the dam is part of the Domaine du Lac property at the south end of the lake.  There are about seven other seasonal and permanent properties on Lac à Campbell.

Sauvagneau and Matthews purchased their property in March and received a letter in August from the owners of the dam stating repairs were overdue and that the spillway would be opened in mid-September so the work could be done.

According to Brownsburg-Chatham municipal Director-General Hervé Rivet, the owners are required to do the work under the Dam Safety Act.  Repairs were made to the sluices and valves, mostly over a two-week period.

“We got the whole summer and that was fine,” Matthews said, in reference to how the lake was full during the peak season for swimming and boats.

Currently, docks and kayaks are resting on the muddy lake bottom.  A patriotic resident has raised flagpoles with the Canadian and Québec flags in the middle of the mud flats.

The dam owners have covered the cost of the repairs.  Sauvagneau and Matthews said the only inconvenience for some property owners is that the lake is their source of drinking water.

The property owners around Lac à Campbell have been assured that the lake will be full of water again by next spring. 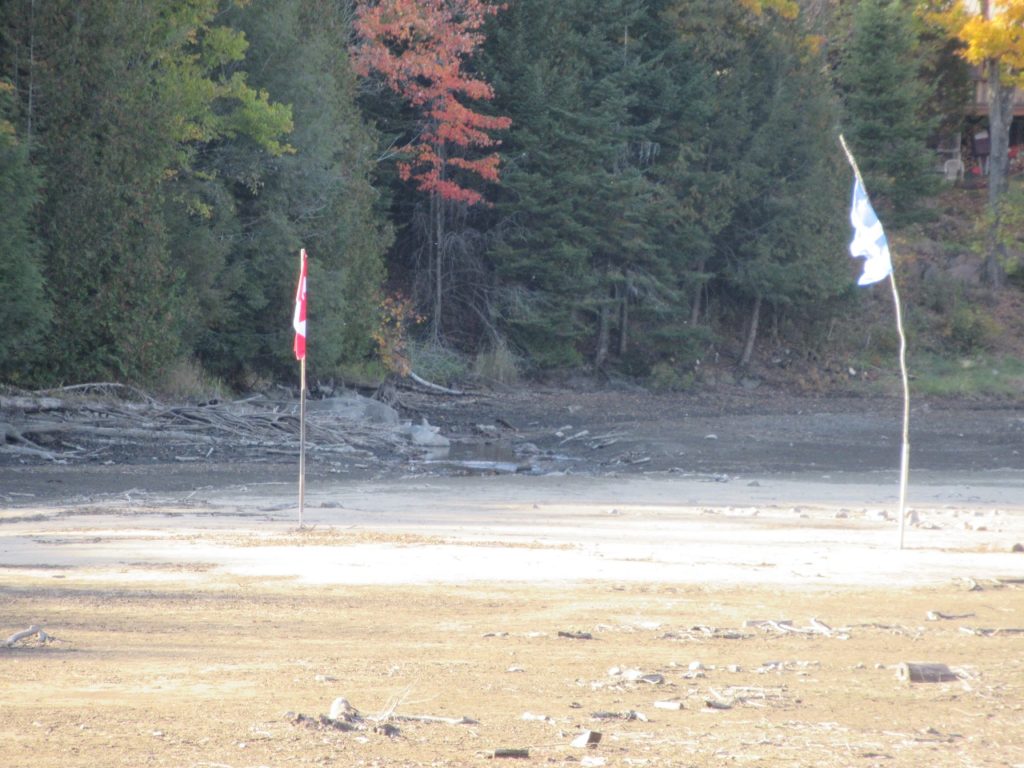 Someone put up a couple of flagpoles on the bottom of the empty lake. Photo: James Morgan 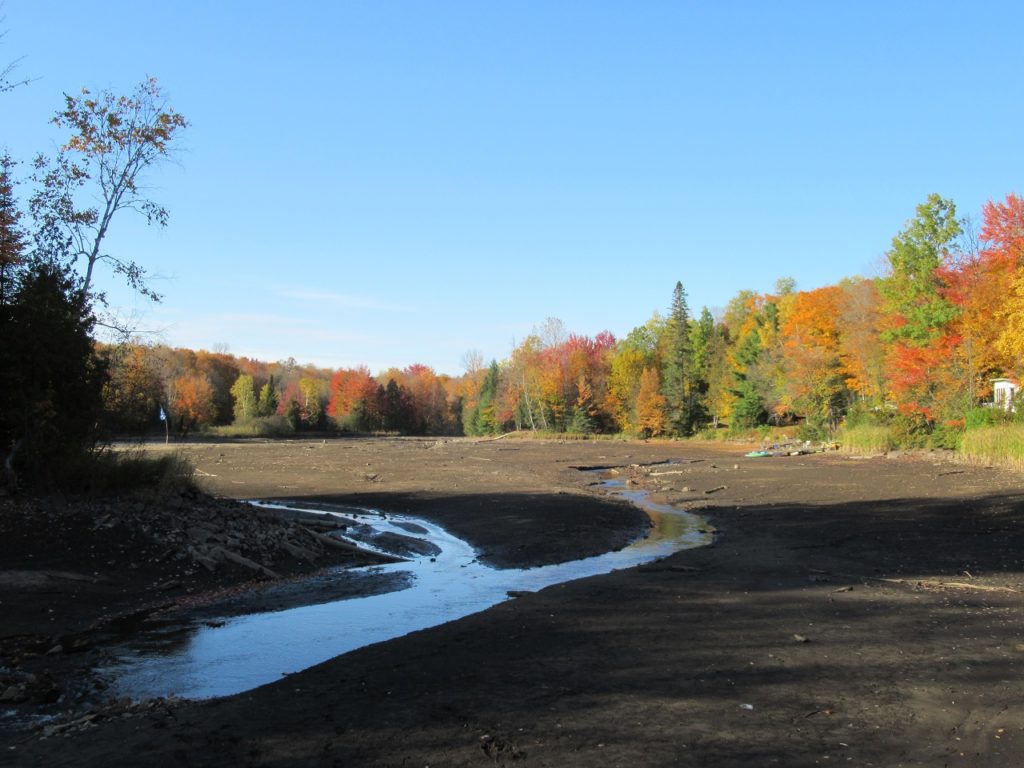 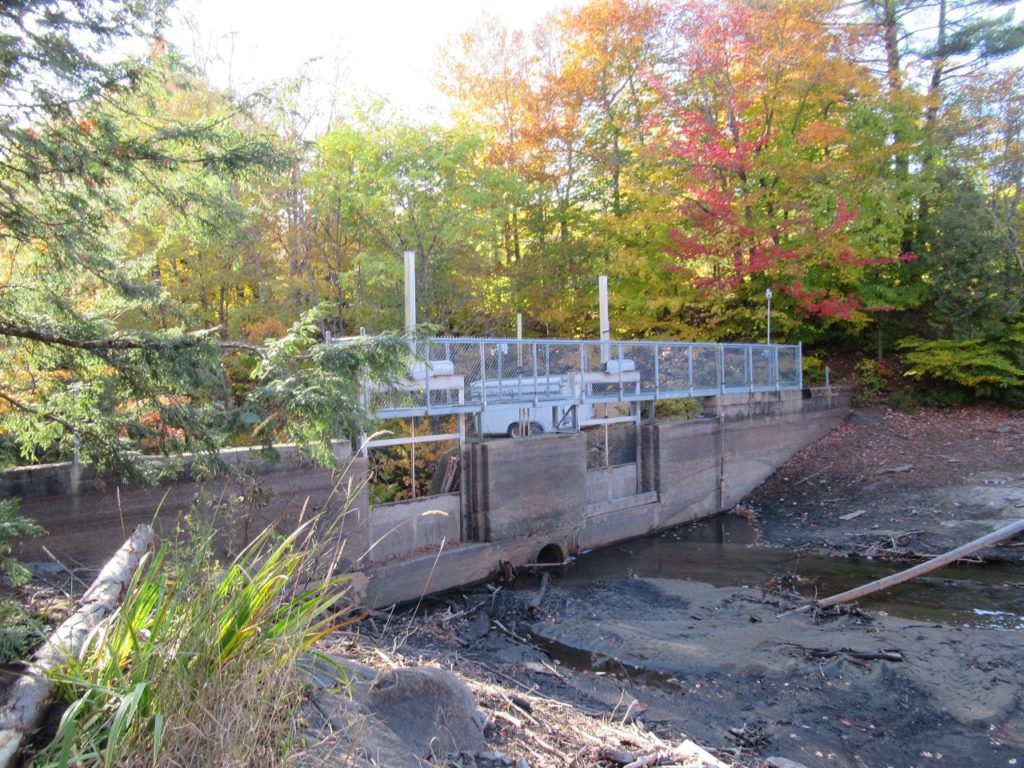 The Lac à Campbell dam has just a trickle of water running through it while repairs are being made. Photo: James Morgan