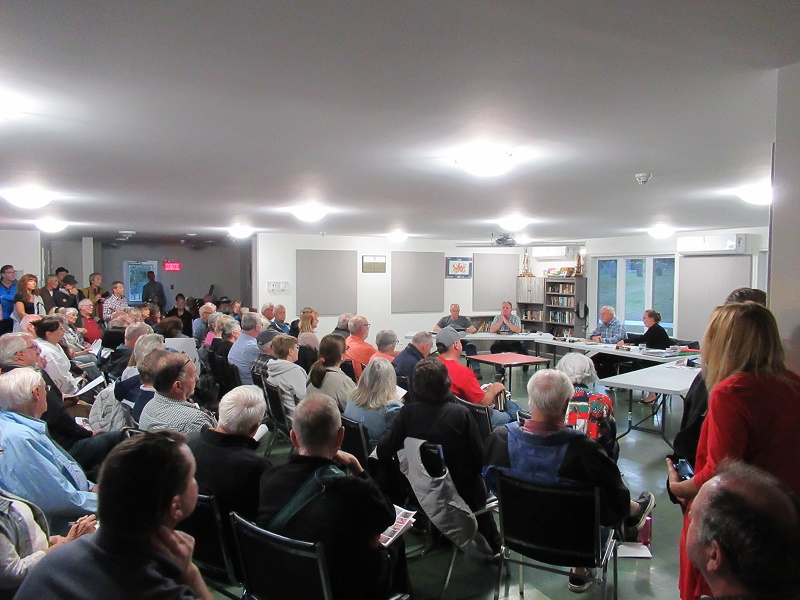 Residents of the Lake Louisa area of Wentworth are angry about plans for a resort to be located near Lake Louisa. About 130 people crowded into the community centre at the September 9 council meeting to voice their opposition and concerns about the possible project.

In January of this year, a group of investors and developer Oliver Tham expressed interest in developing an “integrated tourism” resort.

Mayor Jason Morrison was absent from the September 9 meeting, so Councillor Maurice Pilon acted as chairperson. Pilon told the crowd that Morrison was in Montréal for family reasons.

“I’m not going to comment on that tonight,” said Pilon, prompting jeers from the audience.

However, Pilon later said that he does object to golf course development.

Wockner then referred to a photo of a meeting that supposedly took place in August 2018 before the zoning changes were made where Mayor Jason Morrison is seen sitting beside Oliver Tham.  Wockner said that means the mayor is too closely linked with the development proposal and LLPOA wants him to resign immediately.

Councillor Jay Brothers claimed that the meeting took place in Gore Township and not in Wentworth.

Morrison worked as an inspector for Gore prior to becoming mayor of Wentworth.

Pilon assured the audience that there would be further community meetings to gather input on the resort proposal.  He presumed that Tham would also meet with Wentworth residents.

Accusations were made from the audience that the township did not give proper notice of the zoning changes made in September 2018.

Director-General Natalie Black said all proper communication procedures, which include online and print notices, were followed.

Black also explained to the audience that many of the changes were made in order to comply with Orientation 10, a new zoning policy directive from the Québec government.

Council approved a resolution to carefully consult with residents about the resort proposal.  A report based on comments that have already been gathered on the plan will be made available in about one week.  It is known as the Ryan Report because of the name of the firm hired to prepare it. Black and Pilon assured the audience that further comments will be accepted.

During the second question period of the meeting, Pilon could not answer why Oliver Tham had been present at the alleged meeting in Gore where the photo of him sitting beside Morrison had been taken. Pilon also said he has not met Tham personally.

Wockner asked if there could be an unbiased evaluation of the proposal and asked why the LLPOA’s environment committee was not consulted in 2018 when the zoning changes were passed.  He said the permitted uses under the new law include golf courses, hotels, vacation homes, aircraft landing strips, casinos, and shooting ranges.

Wockner questioned if the project is in the interests of the environment and what residents want.

Pilon and Brothers both emphasized there is not yet an actual resort project.  Brothers said it is not even known if the land in question has been sold for development.

Black explained to the audience that the permitted uses under the zoning changes are a result of Orientation 10 which designated Wentworth as an area for recreational tourism.

However, the municipality does have the ability to restrict the form of the permitted uses, such as limiting hotels to a maximum number of stories.

The LLPOA also has concerns about the Ryan Report itself.  In an interview following the council meeting, Wockner said the company, Ryan Affaires Publiques, is also a lobbying firm and argues that the report was designed to guide the developer through the approval process.

He reiterated the LLPOA’s demand that Jason Morrison resign as mayor.

“Mr. Mayor has put himself in a position where his photo has been used as a promotional document for commercial interests,” said Wockner.