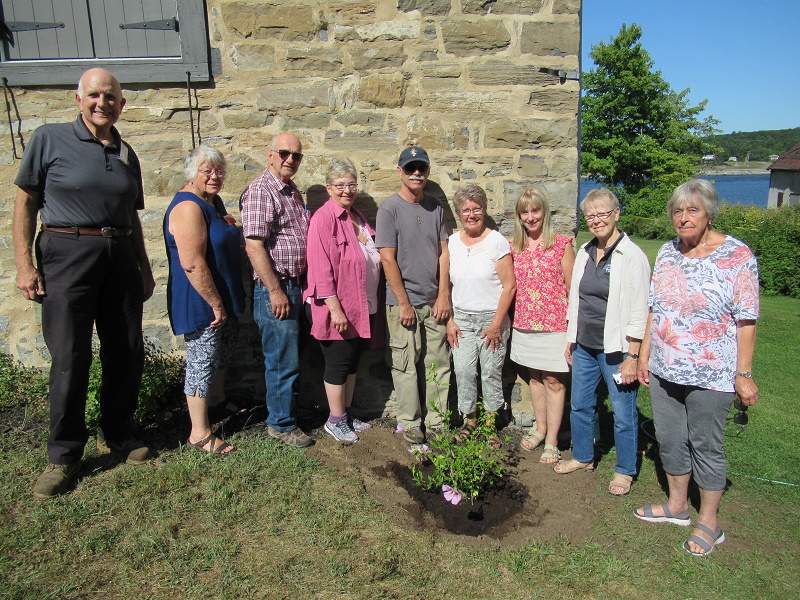 Friends of Macdonell-Williamson House members gathered to plant a Rose of Sharon bush next to the historic home on Sunday in memory of longtime volunteer Yvette Larocque. Photo: James Morgan

As its 2019 season draws to a close, the Friends of Macdonnell-Williamson House took some time on the afternoon of August 24 to remember one of the organization’s longest-serving volunteers.

Yvette Larocque died on August 13, and on August 25, volunteers gathered to plant a flowering Rose of Sharon bush in her memory on the grounds of the historic home and museum in Pointe-Fortune.

“She was an original member of the group in 1993,” said Friends Co-President George Henderson.

A Gaelic-language choir, which was the museum’s special feature on Sunday, performed a song after the bush was planted.

The stone house, high on the bank overlooking the Ottawa River, was built in 1817 by John Macdonell, a fur trader and partner in the North West Company, district court judge, and entrepreneur.  He lived there with his Saskatchewan-born Métis wife Magdeleine Poitras, and their 12 children.  William Williamson and his wife Mary Ellen Everett purchased the home in 1882 and their descendants lived in it until 1961 when the property was expropriated for the adjacent Carillon hydroelectric dam.

The house is a national historic site.  The Ontario Heritage Trust took ownership of the property in 1978, but the house was boarded up until 1997 when the Friends of Macdonell-Williamson House took responsibility for it and began opening the house on July and August weekends as a museum.  During the past 21 years, rooms have been renovated and furnished, and there is also a tearoom and general store space.

The historic basement fireplace and kitchen were rebuilt in 2018.  Plans are presently being made to reconstruct the carriage shed.  Work is also ongoing to replace wooden shutters on the windows.

Sunday, September 1 will be the Macdonell-Williamson House’s final day for the 2019 season.  The Finale Day Family Picnic will feature corn-on-the cob and homemade ice cream for everyone.  The hours are from 11 a.m. to 4 p.m.

The Macdonell-Williamson House is located at 25 rue des Outaouais in Pointe-Fortune.