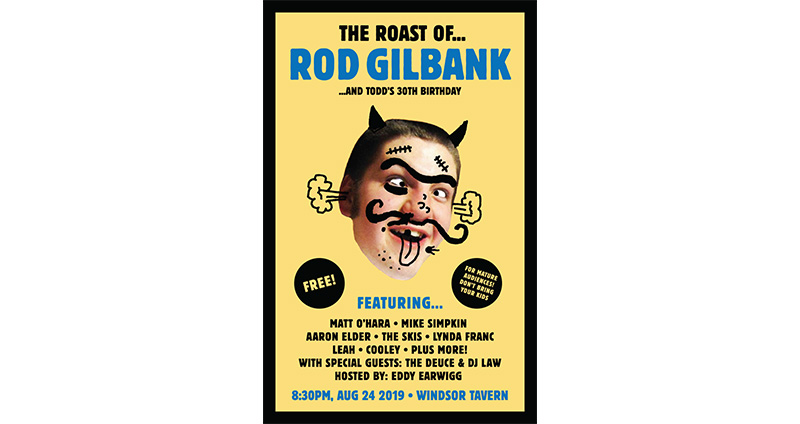 It takes a big personality to be worthy of two names. They tend to be celebrities. Garth Brooks was also Chris Gaines, Cassius Clay was also Muhammad Ali, and Miley Cyrus was also Hannah Montana. Vankleek Hill is home to a lot of big, celebrity-like personalities, but only one has two names: Todd Gilbert is also Rod Gilbank.

At 8:30 p.m. on Saturday, August 24 at the Windsor Tavern in Vankleek Hill, Rod Gilbank will be the subject of a “roast”; an adults-only, no-holds-barred, ruthless amateur comedy night where his foibles and failings will be on full display, all in celebration of Todd Gilbert’s thirty years of life.

Among the ribbing and cajoling, you can expect Rod’s nearest and dearest to reveal a few of his deep dark secrets: what happened that time he saw a dead monkey, what his misspelled tattoo is all about, and the origin story of that hallowed nickname.

The lineup includes a handful of roasters. Former Review journalist Justin Bromberg is appearing, alongside Gilbank’s jilted ex Lynda Franc, human paraquat Mike Simpkin, long-suffering co-worker Matt O’Hara, partner-in-crime Aaron Elder, and former boss Sean Cooley. Professional stand-up comedienne Leah and host “the infamous” Eddy Earwigg round out the group. A few special guests are expected. As the night wraps up, you’ll hear from the man himself, as he responds to his so-called friends in kind.

Come out expecting your belly to jiggle with laughter, your knee to get sore from slapping, and your cheeks to burn from second-hand embarrassment, as you lift a pint in honour of Vankleek Hill’s unofficial mayor Rod Gilbank… or is it Todd Gilbert?