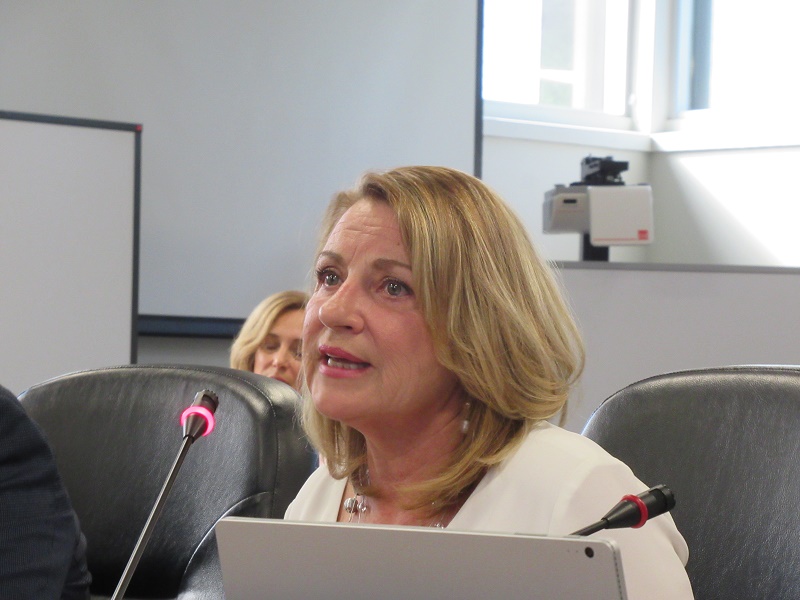 A group trying to boost the number of women in municipal politics in Prescott-Russell is getting the endorsement of united counties council.

At the August 15 Committee of the Whole meeting, Leadership féminin Prescott-Russell  (LFPR) presented it’s plan to achieve 50 per cent female representation on municipal councils in the counties.  The presentation was given by Marie-Noëlle Lanthier, who is also a Councillor in La Nation.

“The goal of our project is to increase female participation on municipal council’s in Prescott Russell,” said Lanthier.

Women compose 51 per cent of the population in Prescott-Russell, but only 21 per cent of the elected officials in the counties are women.  The Ontario average for women in elected positions is 29.5 per cent.  In Québec it is 32.3 per cent, and the Canada average is 26 per cent.

Lanthier again referred to Québec where 42.5 per cent of the elected officials aged 18 to 35 are women.  The Federation québecoise des municipalités (FQM) wants to achieve gender parity on municipal councils by 2021

Hawkesbury Mayor Paula Assaly is the only female mayor in Prescott-Russell and thus the only woman on the united counties council.  There are no other women serving on Hawkesbury council.  Champlain and Alfred-Plantagenet each have two female councillors.  East Hawkesbury, La Nation, Casselman, and Russell Township each have one woman on their councils.

Lanthier highlighted the obstacles women face to getting elected.  She referred to social barriers, a lack of role models, and low remuneration.

She said they want to demystify stereotypes and build alliances.

The FCM is providing $100,000 for initiatives across the country aimed at achieving gender parity on municipal councils.

LFPR has given its presentation and request for support to Champlain, La Nation, and Clarence-Rockland councils.  Champlain voted against supporting the initiative and the other two councils voted in favour.

(At Champlain Township’s regular meeting, council listened to Lanthier’s presentation, but Councillor André Roy commented that he did not see the need for it. He noted that the township had two female councillors. Champlain Township Mayor Normand Riopel thanked her for her presentation and wished her luck.)

In response to a question from Russell Township Mayor Pierre Leroux, Lanthier emphasized that the initiative is not only for francophone women.

Assaly said more should be done to demystify municipal politics, not just for women, but for all citizens.

Lanthier said she is very proud to have the support of the UCPR.

Prescott-Russell counties council will approve a resolution authorizing the financial support for LFPR when it meets on August 28.