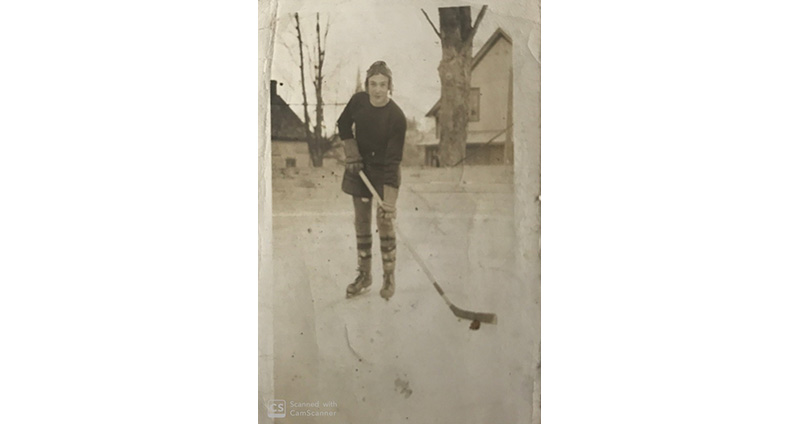 The late Pilot Officer Campbell “Geeses” MacGillivray was born on June 17, 1921, son of Hugh John and Mary (nee MacMaster) MacGillivray of Kirk Hill.  No doubt his athleticism began to develop in his formative years at Pine Grove School on the Laggan Road, but it was during his Alexandria High School years that Campbell’s reputation as an exceptionally gifted all-round athlete in skill and in sportsmanship emerged.  Campbell seized opportunities to play as many sports as possible and excelled in all that he played, notably, track and field, hockey, soccer and lacrosse.  Amongst his high school friends and in the Glengarry community, Campbell was affectionately known by the nickname “Geeses”.

As a young man attending AHS, Geeses’ athleticism was quickly recognized.  The school’s track and field meet was held in the fall, and on these days Geeses displayed his formidable abilities.  In his grade 10 year of 1938, he finished first in pole vault, high jump and the 880 yard run.  He finished second  in the 220 and 440 and third in the 100-yard races.  That year he accumulated an overall 25 points to win the Senior Boys Trophy.  His closest competitor that day finished with 19 points.  Over his high school track and field career, Geeses was always one of the top three finishers in the field events of Pole Vault, Shot Put, High, Broad and Triple Jump, and on the track for 100, 220, 440, and 880 yard races.  As a result of his consistent top finishes in all events that he entered, Geeses earned the distinct honour of winning the Senior Men’s Track and Field trophy for four consecutive years beginning in Grade 9 in 1937 through to Grade 12 in 1940.  A similar feat has never since been repeated.

The winter months saw Geeses play for the Alexandria High School hockey team, playing either as the team centre forward or on defence as needed.  In the early spring of 1941, the school hockey team won the Glengarry-Prescott Championship Trophy in a league consisting of school teams from Maxville, Vankleek Hill, Hawkesbury English and Hawkesbury French.  That season, the Alexandria team went undefeated. Geeses served as team captain and led the team in scoring, netting 25 goals in eight league games.  In the semi-finals AHS went on to win two games straight before taking on Hawkesbury French in a three-game final for the league title.  Hawkesbury and Alexandria split the first two games so a third and deciding game was scheduled for a Friday night.  This final game is recorded as having been played during a heavy snowfall. The teams agreed to play four 16-minute periods so that the snow could be shovelled from the outdoor surface between periods.  The final score on this snowy evening was 6 – 5 for Alexandria, with Geeses scoring 5 of the team’s goals.  Later, at a school sports banquet held at the Alexander Hall, Geeses was presented the Powers Trophy, recognizing the AHS team as league champions of the Prescott and Glengarry Intercollegiate Hockey League.

While a student at AHS, Geeses’ exceptional hockey skills saw him recruited to play with the Cardinals, Alexandria’s entry in the Glengarry Junior Hockey League in 1939. The season opener was played in Martintown, and Campbell scored 3 of the goals in the 8-1 win over the home team.  During that year he also played in the Cornwall O.C.O.T Juvenile League as a member of the Alexandria Red Blacks hockey team.

Many years later, in 1968, former school and teammates, Howie Morris, Adrien Filion and Biel Poirier sought permission from Geeses’ parents to name a trophy in honour of their friend to recognize the best hockey player in Glengarry.  At the time, “Sports in the Glens” columnist for the Glengarry News Angus H. McDonell wrote, “It was an unanimous opinion of the Lions Club Sport committee that no young hockey player of any era in Glengarry showed more potential than the late Campbell MacGillivray, son of Mr. and Mrs. H.J. MacGillivray of Kirk Hill.”  Thus, Geeses’ parents donated the J. Campbell MacGillivray Memorial Trophy in their son’s memory to the Alexandria Lions Club for presentation at its annual Sportsman’s Dinner.  Fittingly, the first recipient was Ralph MacSweyn, a neighbour from the Laggan Road, who was inducted into the Hall of Fame for his own hockey and soccer accomplishments in 1993.  Geeses remarkably captured the attention of all who played with him and against him and those who watched him play.  Alexandria native Lee McCormick once shared with Geeses’ nephew and namesake Campbell that he remembered Geeses playing hockey on Alexandria’s outdoor rink and the only other player he has seen who could skate like Geeses was Paul Coffey of the Edmonton Oilers.

Geeses was a valuable member of the dominating Pine Grove Football (soccer) team during the years 1938 to 1941, where he played the offensive inside position. Chronicled in the book, Glengarry’s Game, 75 Years of Soccer in Glengarry, are detailed accounts of Pine Grove’s league and championship games. Geeses contributed invaluably to this Pine Grove team winning four GSL league titles, three GSL championships, and two Ottawa Valley Championships, all with an incredible 36-game undefeated streak. The numerous mentions of Geeses’ soccer prowess alongside his brother Dougal, and linemate Donald MacSweyn, describe their scoring abilities as a constant threat to any opposing team.  More specifically, during the league playoff run in 1940,  Geeses scored 6 of the team’s 8 goals, enough to earn Pine Grove the championship.  Advancing to the Ottawa Valley Championship, Pine Grove went on to defeat the Ottawa League champions, the Ottawa Corinthians.  Pine Grove outscored Ottawa 5 goals to 1, and Geeses again led his team in netting 3 of the 5 goals.  Not surprisingly, Geeses received the GSL top scorer award in the 1941 season.  The players of the Pine Grove Football Club were inducted into the Hall of Fame in 1997.

When not on the soccer field or the ice rink, MacGillivray was recruited to play with the Alexandria Lacrosse team when the team was short players. In one game against Dalhousie, Alexandria won 8 to 5 and Campbell scored 6 of the goals.  Local historian Harold MacMillan recalls a story told to him by Geeses’ brother, Dougal. It was a Sunday afternoon and the team was short of players. The boys’ parents did not approve of them playing sports on a Sunday, but the late Dave Markson convinced the boys the need was great, so he told them to start walking towards Laggan and he would drive from town and pick them up.  The brothers played the game. All was well until the Glengarry News came out the following week and reported that one of the boys had scored.  Dougal laughed when he told Harold that either his parents didn’t read the article or they chose to ignore it, but nothing was ever mentioned about that Sunday game in the MacGillivray house.  Campbell played almost any sport that he could. During these years, he played baseball for the Kirk Hill church team, where he played the position of pitcher and once again led his team to win a local tournament. In a letter home to his parents, Geeses wrote that he was able to play baseball in the RCAF for recreation.

Geeses’ sports accomplishments end here and what could have become of his future as an elite amateur or professional athlete can only be imagined.  Following high school, Campbell (Geeses) MacGillivray enlisted in the Royal Canadian Air Force in July of 1942.  He trained in Toronto and Goderich before completing his pilot’s course in Brandon, Manitoba, where he “won his wings”.  Sgt. MacGillivray went to England in the spring of 1943.  He was the pilot of a Lancaster bomber and flew his first mission on December 1, 1943.  His log journal records 8 missions, 6 of which were over Berlin.  His plane was shot down on January 21, 1944.  In October 2016, Geeses’ nephew Campbell and his daughter Martha and niece Margie travelled to Germany. They visited the site of their Uncle Geeses MacGillivray’s downed plane and his gravesite located in the Berlin Commonwealth Cemetery, Charlottenburg, Germany.  Nephew Campbell feels that his uncle’s final resting spot is most fitting considering that he is in Charlottenburg, a name associated with Glengarry.

Most of Geeses’ school chums, teammates and team supporters have passed on, but the stories of Geeses’ moments on the ice or field during a particular moment in a game were fondly and regularly shared with family members.  Geeses’ nephew, Campbell, is fortunate to be one such person who keeps his late uncle’s sports stories and stories of character alive. Kent MacSweyn recalls his father Donald Duncan MacSweyn praising the athleticism of Geeses, “He was head and shoulders above everybody else, an all-round player on the soccer field.”  Anna Margaret (MacSweyn) Hay was a few years younger than Geeses, but she remembers his reputation as a fine gentleman, a super athlete and a good dancer. “Everybody knew Geeses and everybody liked him.” Beyond the sport stories, Campbell tells of the time the Levac brothers from Dalkeith, Claude and Rolland, were heading home in the late hours after a New Year’s Eve party in 1942. It was a very cold night and their car had stopped east of Laggan.  Geeses, who had recently arrived home after winning his wings, happened to come along not long after.  Although both parties were not close friends, they knew of each other from within the local community.  Geeses went back to his car, retrieved a bottle of liquor, and insisted on toasting the New Year with the brothers before the remainder of the bottle was poured into the gas tank.  Once the gas line thawed, all parties made their way home.  The next day, Geeses left for England.

The war took its toll on young lives that had not achieved their potential in so many ways and the loss of Pilot Officer Campbell (Geeses) MacGillivray is one such tragic example.  In his short life before going to war he left a lasting and indomitable impression in Glengarry sports lore.

The late Pilot Officer Campbell (Geeses) MacGillivray will be inducted into the Glengarry Sports Hall of Fame on August 21 in Williamstown.