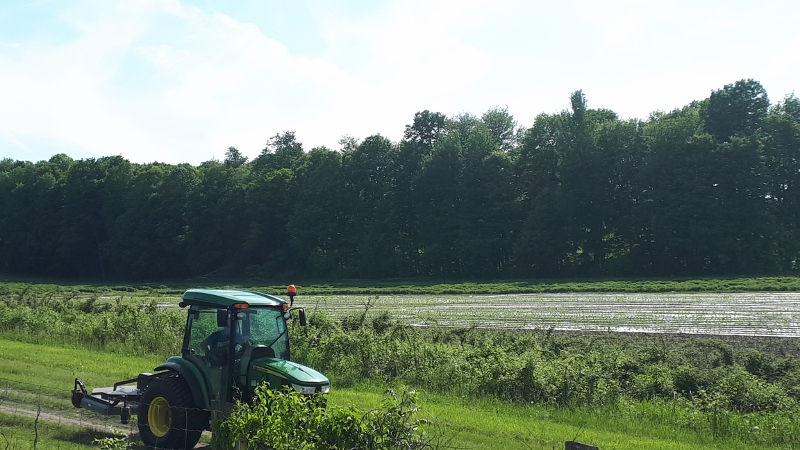 The unusual spring weather has slowed strawberry season and is likely to affect some vegetables as well.

According to fruit and vegetable farmer Jacques Lamoureux, owner of Les Jardins Lamoureux near Hawkesbury, strawberries are about two weeks late due to excessive rain and cool weather.

Lamoureux said the day neutral variety of strawberries, which normally grow surrounded by plastic bedding, are usually ready during the first week of June.

He ate his first day neutral strawberry from the field on June 11 and said sales would likely start during the third week of June.

The conventional variety of strawberries are normally ready around June 15, but Lamoureux is anticipating they will be ready for picking around July 1.

Lamoureux said he is still not sure of how this year’s blueberry and raspberry seasons will go.

According to the Berry Growers of Ontario, blueberry season normally begins in early to mid-July but can continue through to early September, depending on climate and the variety of cultivated blueberries that are available.

Raspberries are usually available beginning in early July.  Fall-bearing varieties mean that they are often available into October.

The bigger concern is with vegetables.

He is anticipating beans and sweet corn will about two weeks later than usual this year.

According to Grain Farmers of Ontario Chair Markus Haerle of St-Isidore, the amount of rain this spring has slowed down crop planting.

“We are roughly about three weeks behind planting dates,” he said.

He said that some of the winter wheat crop in Ontario did not survive the winter or spring due to the weather either.

“We know that the fall is going to come,” Haerle said.

As a result of the wet weather, Agricorp, the Ontario government’s crop insurance agency, extended the planting deadlines to apply for production insurance this year in Area B, which covers all of Prescott and Russell, and Stormont-Dundas, and Glengarry counties.  Corn was extended to June 17.  Soybeans, and coloured and white beans are extended to July 5.