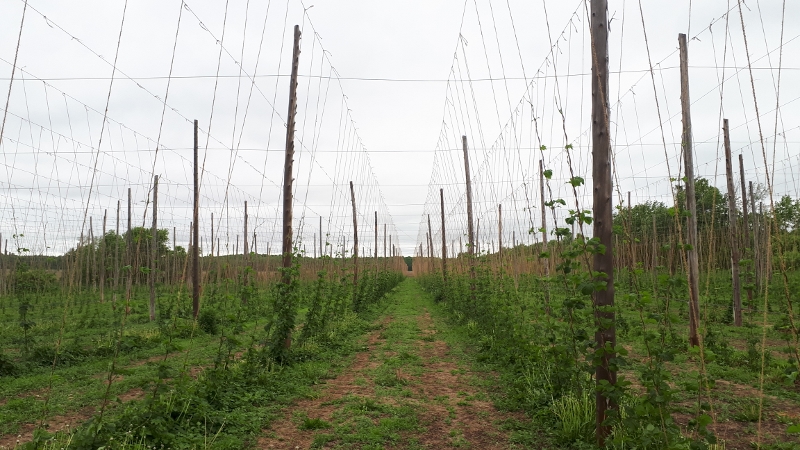 It’s easy to think of hops as just an ingredient in in beer, but hops have more uses than that.

Hops are being grown locally at Dalgara Farms on the Laggan-Glenelg Road in North Glengarry.  Farm manager Kurt MacSweyn said the 11 acres of various varieties of hops were planted three years ago.

Hops are a perennial crop that grow on vines.  In Canada and the US, the fields where they are grown are commonly called hop yards.

The ingredient sought after by brewers and users of herbal medicines is the flower or cone of the plant, which somewhat resembles an immature spruce or hemlock cone.

MacSweyn said he was looking to diversify which crops are grown on his family’s farm and thought hops would be a good option due to opportunities in the local craft beer industry and possibilities in natural food supplements and essential oils.  Currently, hops grown at Dalgara are supplied to Wood Brothers brewery in Glen Robertson.

The 10,000 hops plants on the farm were planted one by one and were purchased from greenhouses in Niagara Region.  As the vines grow, MacSweyn and his three other employees pay close attention to train them to grow up and around the wires that are strung throughout the hop yard and suspended from cedar poles.  Irrigation is supplied by underground hoses.

There are challenges to growing hops.  MacSweyn said the heavy clay soil on his farm when they were planting was one of them.

“For hops, you’ve really got to watch for downy mildew,” said MacSweyn.

Downy mildew is caused by damp weather, and there has been a lot of that this spring.

Once the vines are harvested, the actual hops cone must be removed from the vine.  Dalgara has one a machine which does just that. Until recently, pelletizing the cones for the commercial market for use by brewers was not easy for MacSweyn.  The nearest machines were in Tweed, north of Belleville in Ontario, or in Québec’s Pontiac region.  In December 2018, MacSweyn obtained a pelletizing machine with the help of a federal grant.  The machine is now set up next to the de-vining machine and will be busy at harvest time.

Some of the non-beer uses for hops include essential oils, a natural sleep aid, and herbal teas.  MacSweyn is hoping to explore opportunities in that market further.

Right now, the drinkable version of hops from Dalgara Farms is available from the Wood Brothers brewery at White Pine Lumber in Glen Robertson, the Jet Set Pub at the NAV Centre in Cornwall and Esca Gourmet Pizza and Bar, also in Cornwall.