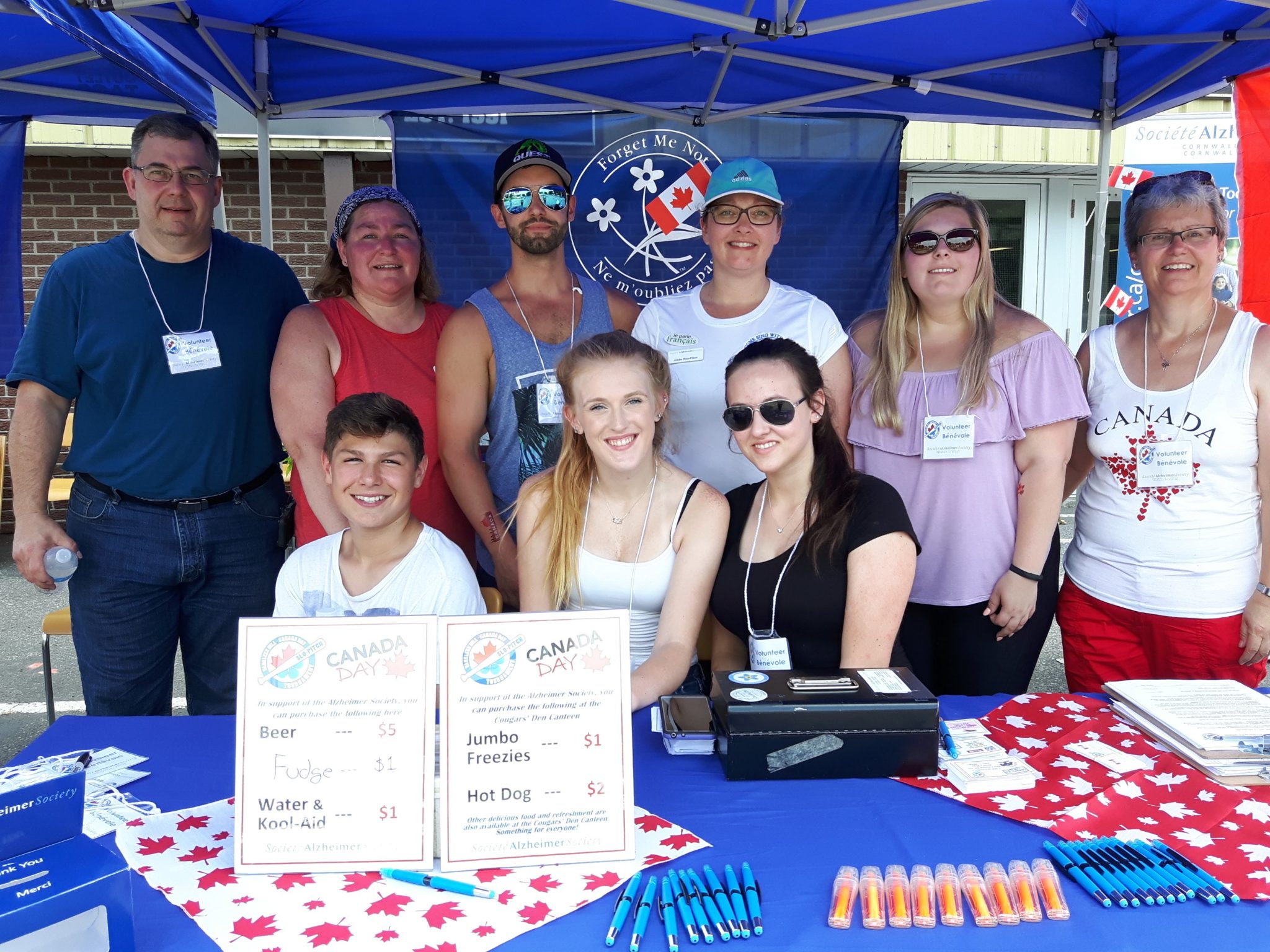 The Cornwall & District – Alzheimer Society of Canada staff and volunteers were manning this booth at the Canada Day slo-pitch tournament which took place at the Vankleek Hill Community Centre in 2018.

The 4th annual Vankleek Hill Canada Day Celebrations and Mixed Slo-Pitch Tournament is coming up on Saturday, June 29, 2019 from 8 am-9pm at Mill St. Park in Vankleek Hill. In addition to the softball tournament, this family-friendly event will feature a splash pad, inflatables, a dance class put on by Zudio, draws and much, much more. Members of the community who attend will also get a chance to sample food from Sticky Cow Southern BBQ and listen to a live on location broadcast from Wild Country 96.5FM.

All the proceeds from the event will go towards the Alzheimer Society of Cornwall and District to help provide programs and services for local families who are living with dementia. These donor-funded programs include Minds in Motion, which is a part exercise and part cognitive stimulation program to help people living with dementia and their caregivers strengthen their bonds and maintain good health. They also include, caregiver support groups, who get together to share their experiences and learn from each other.  According to family support caseworker at the Alzheimer Society Lindsay Ferguson, support groups provide powerful opportunities for people to engage with one another and build strong social bonds, “I think it says a lot that people will get together outside of the group, and that let’s me know this program makes a real difference in their lives.”

Last year the softball tournament and Canada Day celebrations helped raise over $5,000 for local families living with dementia. Communications and Campaign Coordinator at the Alzheimer Society, Jennifer Weeks says, “the key to the success of the event is the strong support the business community and the township of Champlain.” She adds that what really makes this event special is that it is an opportunity for people of all ages to come together to celebrate our great nation, while at the same time making a difference for the over 3,600 people in the five eastern counties battling dementia.

About the Alzheimer Society of Cornwall and District

The Alzheimer Society of Cornwall and District helps those living with Alzheimer’s disease or other dementias and their families live well through support, education, advocacy and research. The Society received charitable status in January of 1986. We serve the counties of Stormont, Dundas, Glengarry, Prescott and Russell, the city of Cornwall and Akwesasne. We are proud to serve clients and to provide our services in both official languages.