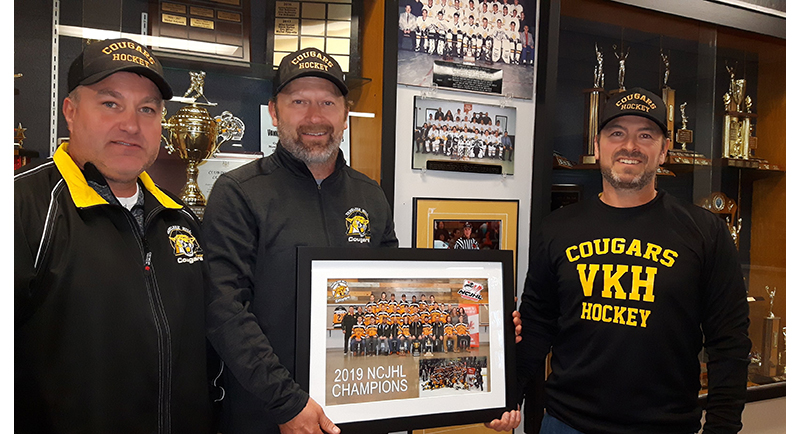 Marc Bernique is no stranger to the Vankleek Hill Cougars. Now, he is one of three owners. But he is also in the black and white photo on the wall at the Vankleek Hill Community Centre, because he played on the first-ever Cougars team almost 30 years ago. Bernique is seen here with fellow team-owners Frank Dopelhamer and Greg McEachern. Photo: Louise Sproule

The Vankleek Hill Junior C Cougars team has a new ownership team. Three of the team’s biggest fans and supporters say they decided to make the move to purchase because they could see the same scenario as last year bringing the team to the verge of closure all over again.

In 2018, the team almost folded due to lack of volunteers, in particular – there were no people willing to step into leadership roles on the community-owned Vankleek Hill Cougars executive board of directors.

Back then, Marc Bernique, Greg McEachern and Frank Dopelhamer renewed their commitment to keeping the team going and you could say it was a winning combination. In 2019, the Vankleek Hill Cougars won the National Capital Junior Hockey League Championships.

Bernique will act as General Manager, Dopelhamer will be the coach and  McEachern will be the assistant coach. The three are essentially carrying on their roles from the last season.

Cougars president Mario Messier said it was the best thing that could happen for the team.

“We have been having problems and these guys are committed,” Messier said, commending Bernique for his hard work as a fundraiser and promoter of the team.

The decision to purchase wasn’t an easy one, according to Berniquez, who says that the three of them spent a lot of time thinking before taking the final step.

But it all came together the night of the year-end banquet, says Bernique, who feels that is when the decision was made to move forward.

“We made an offer to the board and there were some back-and-forth offers, but we sorted everything out this past weekend and signed the deal on Saturday (June 1),” Bernique explained. The new owners must keep the team in Vankleek Hill for at least five years, but the trio says their plan is to stay in Vankleek Hill forever.

The three-member partnership should make it easy to move the team forward, says Bernique, who is no stranger to how the Vankleek Hill Cougars work. He was on the ice as part of the very first Cougars team almost 30 years ago.

The ownership team has paid an undisclosed sum for the community-owned team, which was started when local people invested to create the team. The sale proceeds will form a trust from which annual bursaries will be presented to three graduates — one from each of the local high schools: Vankleek Hill Collegiate Institute, École Le Sommet and École secondare catholique régionale de Hawkesbury.

It costs about $50,000 per year to operate the team, they say, with that amount including ice time, referees, league fees, insurance and hockey supplies.

To that end, the trio is hoping for continued community sponsorship and has fundraising plans already underway. A golf tournament takes place on June 15 and while there are only a few spaces left for golfers, there is still time for sponsors to get involved. Interested sponsors can email Dopelhamer at: [email protected]  The championship rings will be presented to the members of the winning Cougars team at the golf tournament.

More team sponsorship opportunities are available and you can learn more on the team’s website.

Try-outs for the 2019-2020 team will be happening soon. Young players between the ages of 16 and 20 can contact the management if they are interested.

The new owners are looking to build a better attendance at the regular games — with the idea of making Saturday night at the arena the go-to activity for locals. They have plans to build up a stronger social media following and keep information regularly updated.

“We had so much fun at the end of the season during playoffs. We had such a great fan turnout and it was so great to win. We want to repeat that,” said McEachern.

But at the end of the day, the three new owners say they just love hockey. And they love working with the young players.