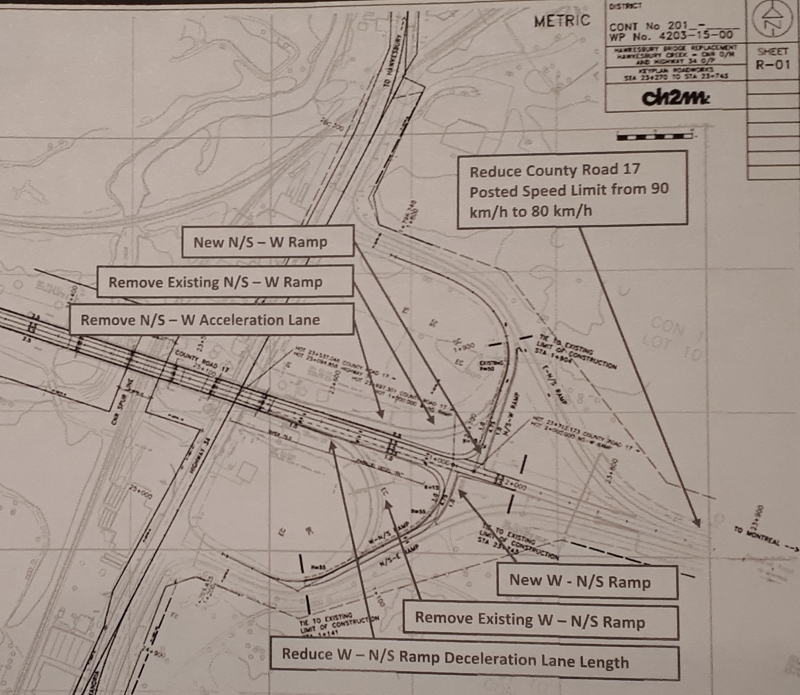 Plans for reconfiguration of the Highway 34 and County Road 17 interchange. Ministry of Transportation of Ontario

Hawkesbury town council is trying to get the Ministry of Transportation of Ontario (MTO) to reconsider its plans to reconfigure the Highway 34 and County Road 17 interchange.

On May 27, council approved filing an objection under the Environmental Assessment Act over how the proposed reconstruction of the highway overpass, interchange, and adjacent CNR overpass are to be reconstructed.

Mayor Paula Assaly has previously objected to plans by the MTO to remove the additional lanes on Highway 34 below the overpass and to have the ramps approaching County Road 17 meet the highway at stop signs rather than the existing ramps.  The merge lanes for driving on or off of County Road 17 would also be eliminated.

Public consultations on the project have already taken place.

In 2017, the UCPR commissioned a peer review of preferred designs for the interchange which included traffic flow and volume studies where were rejected by the MTO.  The motion to file the objection passed by Hawkesbury council alleges that the MTO rejected the UCPR review without properly notifying the affected municipalities.

Filing the objection does not have any impact on the town’s budget.  The reconstruction project at Highway 34 and County Road 17 is to take place this summer, but the objection could delay the work.

Council approved hiring a firm to do video production and promotion work for the town as part of its new communications program.

According to Chief Administrative Officer Daniel Gatien, the town’s new communications coordinator will begin work “in the coming weeks.”  However, a supplier of video production, promotions, and social media material for the town was also wanted as part of the strategy.

The town will use savings achieved from the tourism budget to cover the cost.