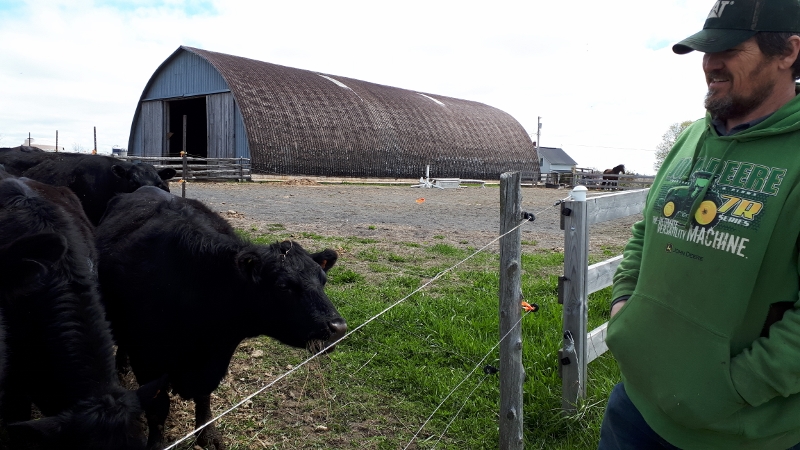 Kirkview Farms looks and feels like an old-fashioned place, but new ideas are at work here.

Mike MacGillivray and his wife, Cora practice what is known as regenerative, organic agriculture on their farm at Kirkhill in North Glengarry.  In a lot of ways, regenerative, organic agriculture seems like a revival of the practices of decades past.  The chicken coop is outdoors, and the birds run around in a pen surrounding it.  Occasionally one hops the fence and walks around the yard.  In the barn, piglets cozy up to their mother sow while a gentle barn cat rests on a ledge.  On the hill behind the barn, cattle graze and stare at passers-by.

The intent of the regenerative approach is to create a cycle of farming and food production that not only includes sustainable farming practices, but also better enables the means of food processing locally, such as slaughterhouses.

Mike said Eastern Ontario needs to make further advances in developing that economic cycle.  He said that southwestern Ontario has a better local food processing infrastructure in place, even though agriculture there is more industrialized.  According to Mike, access to slaughterhouses is a challenge for producers like him.  The nearest ones are in Lefaivre and Chesterville.

However, due to the size of farms and type of land in Eastern Ontario, Mike believes this region is well-suited to small-scale farming.

Self-sufficiency for feed supply is one of Mike’s goals for Kirkview, but, “It’s a huge challenge,” he said.

“There just isn’t access to local sources,” he explained.

As proof of that challenge, Mike said he recently drove almost all night to purchase a load of feed from a mill in Grand Valley, northwest of Toronto.

Mike prefers to use grain feed rather than the pelletized form that many larger farmers use these days.  Another challenge is finding chicken feed that contains peas rather than soy.

In today’s large poultry barns, most of the birds are all the same breed.  The Chicken Farmers of Ontario, which is the quota system manager for the industry, has an artisanal program which allows small-scale growers to raise up to 3,000 birds outside of the quota system.  Kirkview is part of this program, which is designed to promote a diversity of breeds and varieties.

“This is probably one of the most forward-thinking supply management programs in Canada,” said Mike.

He suggested the dairy industry should consider something similar in order to better promote local artisan cheesemaking.

Kirkview is also raising heritage breeds of turkeys.  These are different than the large white varieties raised in most commercial barns these days that end up in supermarkets for Thanksgiving and Christmas.  This spring, tiny turkey poults were staying warm under a brooder lamp in the barn.

Mike said the low-line Angus cattle he raises are well-suited for regenerative farming.  They are 60 per cent of the size of regular Angus, and even on a grass-only diet, they can still produce the marbled beef customers want.  He said the smaller-sized portions are also favoured by health-conscious consumers.

Beyond Meat brand, plant-based burgers are now available in stores, and similar products are being offered by burger chains like A&W.  Mike said that if all beef was raised using smaller-scale, regenerative processes, many of the ethical and health concerns that lead consumers to not eat meat and purchase the alternative products would not exist.

Healthy soil and fertilizer are major components of the regenerative process.  All weeding is done mechanically because no herbicides are used.  In order to reduce the effects of chemicals from neighbouring properties, there is a 25-foot buffer zone between Kirkview and adjacent farms.

Mike said he was fortunately able to still get trees to plant this year from the 50 Million Tree program offered by the Ontario government.  He is not pleased that the government has decided to discontinue the program in order to reduce costs.

Currently, Kirkview Farms only sells its beef, pork, and poultry products from the farm itself.  Mike said he would like to add a small shop on the property eventually.  More information about products is available at: https://kirkviewfarms.ca 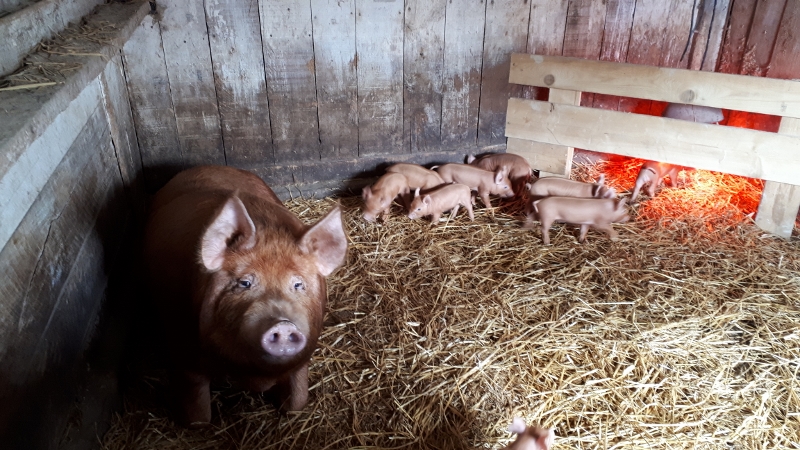 Mother sow and piglets in the barn at Kirkview Farms. Photo: James Morgan