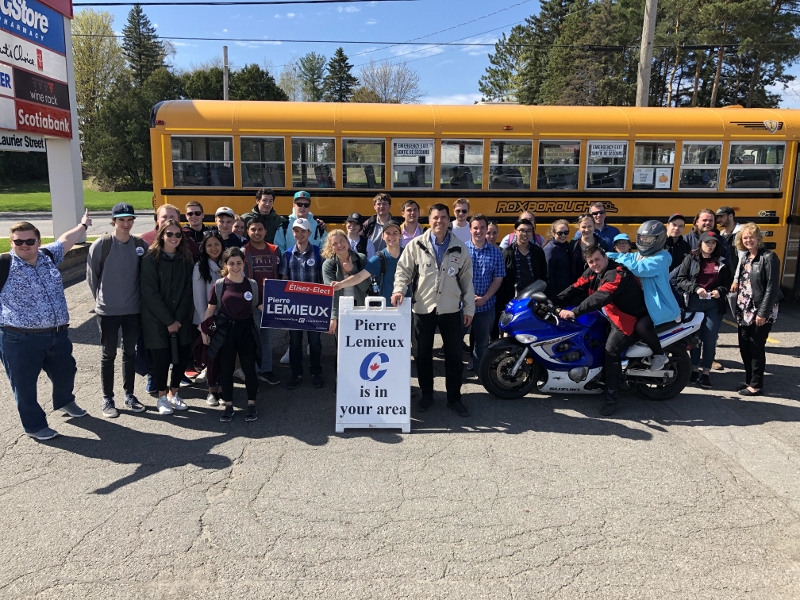 The Conservative Party of Canada candidate is campaigning like the next federal election is tomorrow, but it is on October 21.  Recently, Lemieux and 40 volunteers canvassed more than 4,000 homes in the riding.  Lemieux is hoping to take back the riding for the Conservatives.  He served as its Member of Parliament from 2006 to 2015 when he was defeated by Liberal Francis Drouin.

Lemieux said Canadians want a government that respects due legal process, and that the Liberal government has not shown a high regard for the rule of law.  He was referring to the recent situations involving the relationship between the government and SNC-Lavalin, and the recently-dropped legal case against Vice-Admiral Mark Norman.

He emphasized that a Conservative government would also show more respect for members of the Canadian Armed Forces.

Lemieux contended that Canadians have not been told the full story about what happened in the SNC-Lavalin and Norman situations.

“I have honesty and integrity,” he said.

On Agriculture, Lemieux said better support is needed for farmers in supply-managed sectors due to the new United States-Mexico-Canada Agreement (USMCA) that is intended to replace the North American Free Trade Agreement (NAFTA).

USMCA allows up to 3.6 per cent of the milk in the Canadian market to be imported from the United States.  The Dairy Farmers of Canada organization is also angry with provisions in the agreement which they argue gives the Americans control over Canadian dairy trade policy.

“They threw them under the bus,” said Lemieux about the Liberal government’s treatment of supply-managed farmers in the USMCA negotiating process.

He said that in small towns and rural areas like those in Glengarry-Prescott-Russell, it is difficult for people to change their way of living because alternatives for travel are more difficult to obtain.

“We don’t have access to public transit,” said Lemieux.

He called the carbon tax a “cash grab” by the government that hurts small businesses the most because large polluters are exempt from it.

Lemieux questioned the administrative costs of the rebate program the Liberals have put in place for individuals to receive back the amount of carbon tax they paid.  He said a Conservative government would repeal the tax and implement an alternative environmental plan that party leader Andrew Scheer will announce soon.