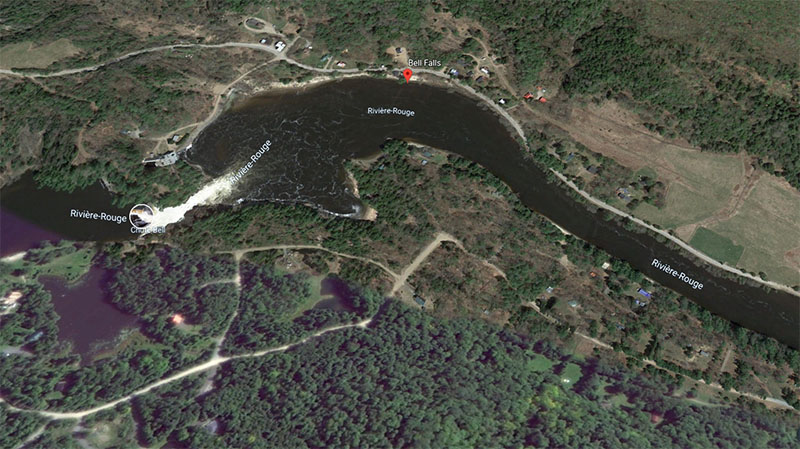 Hydro-Québec is conducting inspections of the Bell Falls dam and plans to send engineers by ground, if it is safe to do so. Dropping water levels are just one factor to be considered before allowing evacuated residents who live downstream from the dam, to return to their homes. Image: Google Earth

A spokesperson from Hydro-Québec said Thursday morning that there is no significant erosion at the Bell Falls dam. But evacuated residents are not allowed to go home just yet.

Grenville-sur-la-Rouge (GSLR) residents from about 50 homes were evacuated from the area downstream from the Bell Falls dam late Thursday afternoon and Friday morning after Hydro-Québec said it could not guarantee the integrity of the dam, given flow levels exceeding those expected once in 1,000 years. The flow was 1,300 cubic metres per second  Thursday evening. It was built to withstand 1,000 cubic metres per second.

An inspection which took place yesterday (May 1) showed no erosion of any importance, according to Hydro-Québec spokesperson Cendrix Bouchard, who said that information may have been misunderstood, referring to a communiqué posted on the GSLR website which stated that erosion had been noted and that repairs would be planned.

More inspections are taking place today, Bouchard said; engineers are being sent in by ground to get as close as is safely possible to the dam.

Ideally, a dry dam is easier to inspect, Bouchard said, but engineers are going in as close as possible without compromising anyone’s safety, he explained.

The flow of water at Bell Falls dam was 675 cubic metres per second at 3 p.m. on Wednesday, May 1 and that, Bouchard says, is still too high to allow the displaced residents to return to their homes. But the flow is only one issue, he continued.

“That information cannot be taken in isolation,” noted Bouchard.

Acknowledging that word had circulated about a possible crack in the dam, Bouchard said he could not confirm where that story started and could not comment on it.

By Friday (May 3), Bouchard said Hydro-Québec should have more information on the condition of the dam.

Bouchard says that Hydro-Québec follows protocols and inspects the dam on a required basis, which depends on many factors and that there is no universal rule. He did not have the protocol or inspection information available during the interview.

“We understand that people want to get back to their homes and we want to thank people (for their cooperation),” Bouchard said.

Last Thursday, April 25, about 60 homes downstream of the Bell Falls dam were evacuated on short notice, after Hydro-Québec warned that the dam was at risk of failure. Rising water levels due to above-average spring run-off have led to river levels matching those of a once-in-1,000-years occurrence.

Later Thursday evening, Hydro-Québec issued a statement reassuring that the dam was well-maintained. That press release said that the generating station is in good working order and has always been properly maintained, as is the case for all Hydro-Québec facilities.

In that press release, Hydro-Québec said it wanted to reassure the population that the evacuation order was issued as a precautionary measure only.

“When public safety is at stake, the company prefers to err on the side of caution. We are closely monitoring the level of all Québec rivers on which we operate facilities, and can affirm that currently, the situation on the Rouge is unique,” stated the April 25 press release.