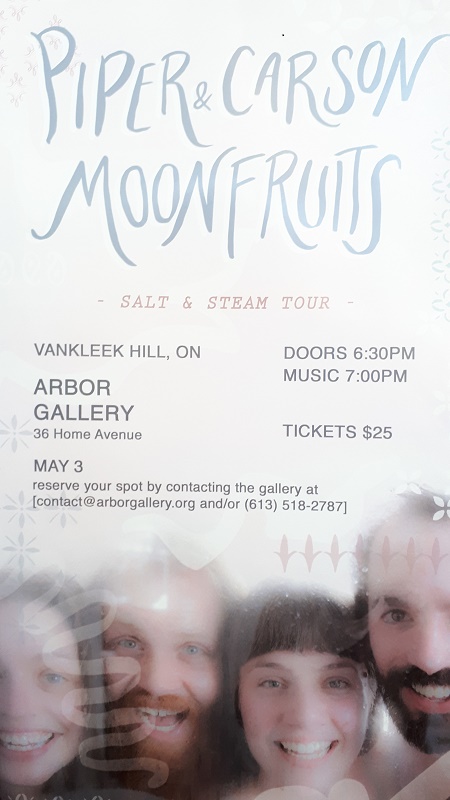 There’s something about warmer days and the landscape growing greener that make an evening of good music just right.

Piper and Carson, a folk/roots duo from Hamilton and Toronto, and Moonfruits, a bilingual folk duo from Ottawa are about to begin their Salt and Steam Tour of eastern Canada and their first stop on that tour is at Vankleek Hill’s Arbor Gallery on May 3 at 7 p.m.

Piper Hayes and partner Carson Ritcey-Thorpe have been performing together for four years and have toured previously, including with VIA Rail’s Artists on Board program where musicians travel on trains and perform for passengers.

Piper has recorded four albums, and her first with Carson—titled Piper and Carson was released in 2017.  It was recorded at his family’s farm near Hamilton.

“They take you to another dimension, they’re quite something,” Piper said about Moonfruits, which is Alex Millaire and Kaitlin Millroy.

Past performances include the NAC Fourth Stage in Ottawa, CityFolk (formerly the Ottawa Folk Festival), and the first simultaneous bilingual broadcast on CBC/Radio Canada.  Their first full-length album, Ste-Quequepart (St-Somewhere) was released in 2017.  Their songs are performed in English and French.

According to Piper, the Moonfruits/Piper and Carson collaboration began in a parking lot at a folk music conference a few years ago.

“We’ve just stayed connected over the years, we love their music, we love each other,” said Piper.

She said both duos have big, wide-ranging voices too, and like to draw their audiences in by giving the background of their songs.

While the trees are budding outside and the flowers are coming up from the ground, an evening of listening to, and being part of, a performance by Piper and Carson with Moonfruits seems very appropriate.  It’s possible to have that experience on Friday evening at Arbor Gallery, located at 36 Home Avenue, in Vankleek Hill.