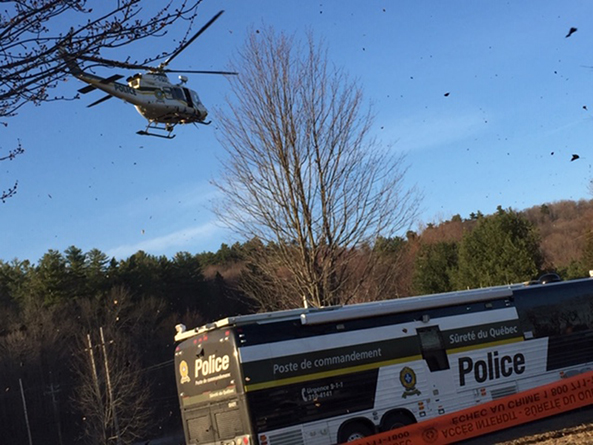 Flooding and concerns over the strength of the Bell Falls dam on Rivière Rouge has led to a state of emergency being declared in Grenville-sur-la Rouge.

Mayor Tom Arnold made the declaration on Friday morning.

On Thursday afternoon, an emergency alert was issued ordering residents who live along the Rouge below the dam to evacuate their homes immediately.

In the declaration, Arnold stated it is still safe for emergency officials to enter the area for now but Hydro-Québec cannot guarantee the integrity of the dam because the water flowing over it exceeds the amount it was designed to withstand.

Bell Falls was designed to handle flows of 960 cubic metres of water per second, but by Sunday, the flow is projected to be 1,000 to 1,300 cubic feet per second.

According to Arnold, any water flow greater than 1,000 cubic feet per second will make it impossible for authorities to enter the area.

Under the declaration, the entire Rouge River valley is a forbidden zone.  Any citizen in the area can be ordered to evacuate, either willingly or by force.

Most of the residents have already been evacuated, but the Sûreté du Québec and Grenville-sur-la-Rouge firefighters have made a final sweep of the area to get any remaining residents out.

They also retrieved some dogs who were reunited with their owners.

“We’re out; we’re safe,” said Gilbert Landry, who was evacuated Thursday with his wife, Karine Moret.

They are happy that their dog, named Happy was retrieved by the firefighters and reunited with them at the municipal office on Friday afternoon.

The couple live approximately one kilometre downstream of the Bell Falls dam and are temporarily staying with friends on Avoca Road.

“I can’t confirm any true stories,” Landry said about speculation on the safety of the dam.

He said a Hydro-Québec engineer told him and his wife that their two-storey home will likely be safe.

The big challenge right now for displaced residents is having enough clothing and personal care items to carry them through their time away from their homes because there was not enough time to pack on Thursday when the evacuation order came.

“We didnt have much time, it was like, get out of the house now,” said Landry.

The couple was going to Lachute on Friday afternoon to register with the Red Cross at the Kevin Lowe/Pierre Pagé Arena where assistance is being provided to flood evacuees from throughout the Argenteuil region.

When disaster victims register with the Red Cross, they are eligible to receive assistance to purchase clothing and personal care items, and obtain temporary lodging, if necessary.

Landry said he asked officials if he could go back to his home to retrieve some items using a safer route, but was told that it would not be permitted.

Here is an audio recording of a press conference held in Grenville-sur-la Rouge on Thursday, April 25 (in French).