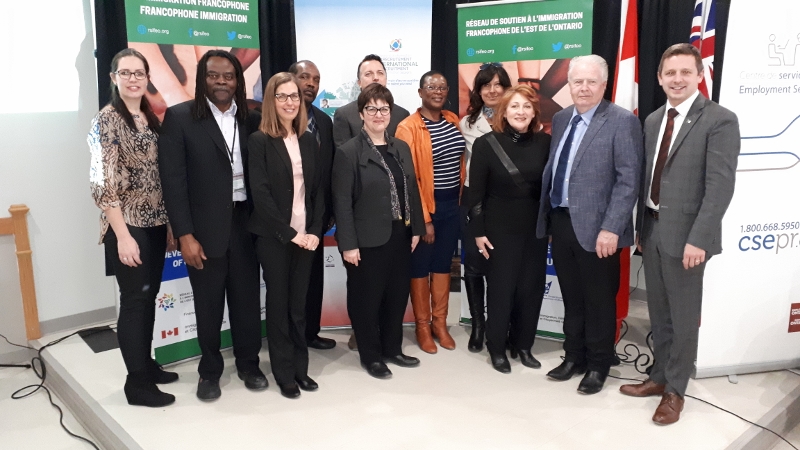 Government and business leaders participated in a meeting on recruiting French-speaking employees from other countries on March 26 in Hawkesbury. Photo: James Morgan

Business and government leaders from across Prescott-Russell recently gathered to discuss recruiting more French-speaking workers from other countries to fill the local demand for labour.

The March 26 meeting in Hawkesbury was organized by the Employment Services Centre.

Louise Van Winkle of the Canadian Embassy in Paris explained that Canada works with government agencies in other countries to help recruit people who are interested in moving to Canada for work.

“Imagine Service Canada finding you a job in another country,” was how Van Winkle explained it.

She noted that not all workers from other countries want jobs in large cities either and that small towns and rural areas are good for raising families.

The Canadian government conducts information sessions and online forums throughout France and Belgium.

Employment Services Centre Director Caroline Arcand said local employers are telling them they need workers and there is an urgency to fill vacant positions.

About 100 employers registered for the Hawkesbury meeting in less than three weeks.

St-Phard Désir, an Ottawa-based specialist at helping francophone immigrants settle in eastern Ontario, said it is often difficult to attract immigrants to work in francophone communities in the region.

“People do not know there are francophone communities outside of Québec,” he said, adding that efforts are also being made to encourage more people to consider settling outside large, urban areas.

Local employers are already considering hiring French-speaking employees from other countries or have begun the process.

Christian Lanthier, owner of the A&W in Rockland said he already has immigrants working at his restaurant but the local Employment Services Centre approached him and asked if he was interested in hiring another individual to fill a supervisor’s position, so he recently began the six to eight week paperwork process.

Labelle said recruiting French-speaking workers from outside Canada could be beneficial for the company’s future needs.