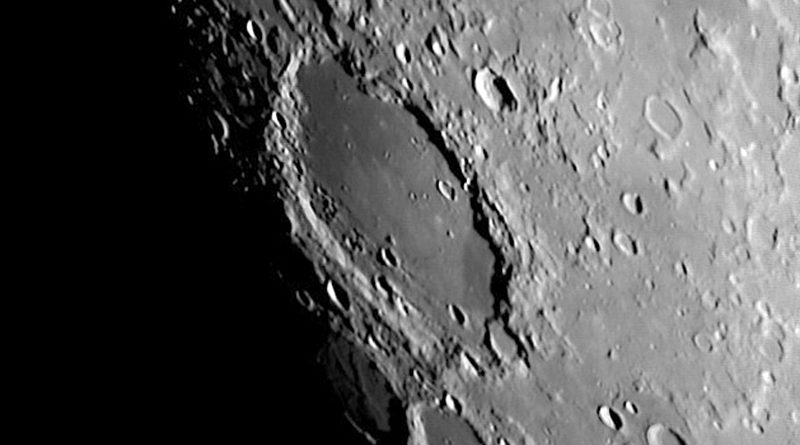 By Gary Boyle – The Backyard Astronomer

Stargazing is a wonderful and peaceful past time that anyone can enjoy. From planets to star clusters, galaxies to nebulae, the night sky is a treasure chest of celestial delights. Although astronomy and star gazing are traditionally done in the dark countryside, our glorious moon can be enjoyed from the city as well.

The moon was created about 50,000 years after the earth formed 4.5 billion years ago. After the sun was created fine dust particles began sticking together, creating larger sand sized pieces. The “snowball” effect continued as more stuff clung together and built up to rock, boulder and small asteroid size.

Over the next few hundred million years this process formed about 100 baby planets call planetesimals. Like a cosmic demolition derby, they orbited the sun at different speeds and directions. One such body called Theia measuring the size of Mars or half that of earth, hit our world with a glancing blow causing its tilt and ejecting molten rock into space. Like the rings of Saturn, the molten debris formed a ring around our planet and started to coalesce to what we see today. Back then, the moon was only twenty thousand kilometres away compared to its average 386,000-kilometre orbit. The moon is still moving away from us at the width of a golf ball per year.

As the molten moon was slowly cooling, lighter material rose to create a thin semi-smooth crust. The later heavy bombardment (LHB) lasting tens of millions of years showered the earth and moon as well as other planets with asteroids and comets. Early earth looked like the moon does today. Some massive asteroids fractured the thin lunar surface and allowed molten lava to float up and flood certain areas. These are the lunar maria that appears as the darker smoother regions.

The close distance of our two worlds creates a “tidal lock” which allows us to see roughly one side of the lunar surface. The so-called “dark side of the moon” is simply the opposite side that earth does not see except for the Apollo and other missions that have mapped this side in great detail. Except for about five days of the moon’s 29.5-day orbit, we see our natural satellite at various phases.

Through the eyepiece of a telescope, you can observe craters measuring only a few kilometres across. From night to night, long and short shadows produced by the sun, provide a slightly different face. The “terminator” is the dividing line between the lit and unlit areas, produces dramatic shadows. When doing terrestrial photography, the full moon will accent your portrait of distant mountains or trees during twilight but is the worst time to view with a telescope. Craters appear as circles without depth.

And on the topic of photography, the moon is bright enough to be imaged through a telescope. Unlike long exposures of constellations and other fainter objects where a telescope motor drive is needed to ensure pinpoint stars, the bright moon requires extremely short exposures. There are now adaptors that allow you to attach your smartphone to the telescope’s eyepiece.