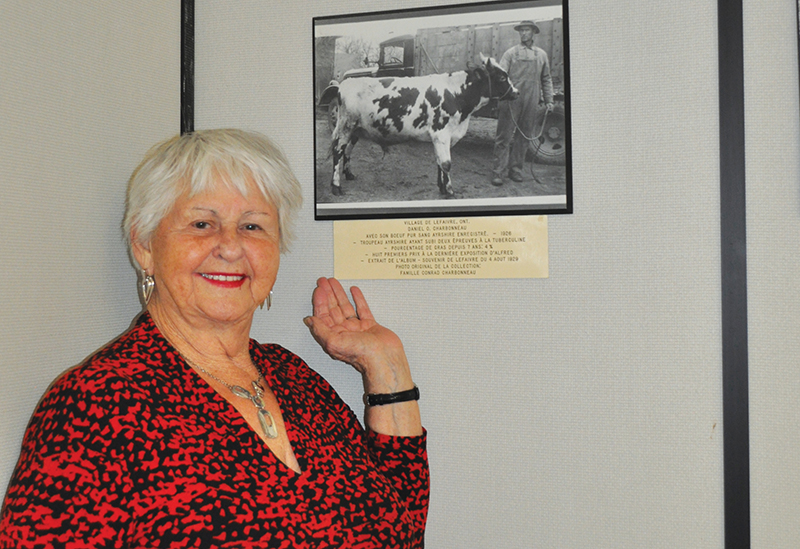 On March 21 and 22, the College d’Alfred campus was the location of a major franco-Ontarien agricultural and community event.

The Congrès Agro et Franco began on Thursday afternoon with the 90th general assembly of the Union des cultivateurs franco-ontariens (UCFO), the organization that represents many francophone farmers in the province and is the host of the congress.

At the Thursday banquet, the annual Pierre-Bercier prize for excellence in agriculture was awarded to Madame Odette Legault (née Charbonneau) of L’Orignal.

Legault has a life-long history in agriculture in Prescott-Russell and many years of involvement in francophone organizations.

She worked on her family’s farm as a child.  Her father died when she was only three, so she was often helping her grandfather look after things.

Madame Legault was also involved with 4-H clubs for many years and remembers taking part in exhibits at the Riceville Fair, and at the now-defunct Central Canada Exhibition in Ottawa.

She explained her main interests in 4-H were varieties of forage crops like hay and barley.

In 1954, she married dairy farmer Louis Legault.  They had six children together and farmed near Cassburn.  Their dairy herd also grew to 125 cattle.

In 1963, the Legaults went into the nursery business when they founded Les Serres Legault, which is still in business on Highway 34 outside Hawkesbury.  Louis Legault died in 2011.  Les Serres Legault is now operated by their son François who is gradually transferring the business to his son Pascal.

Odette Legault was the founder of the Women in Farm Management movement in 1977, and also worked for 10 years on projects for the Association Canadian-Français de l’Ontario (ACFO).

She still pays close attention to agricultural and community issues and remains a member of an ACFO committee in Prescott-Russell.

“It’s a very great honour,” she said about being selected for the award.

Now in her mid 80s and living in her home by the Ottawa River in L’Orignal, Odette Legault is writing her memoirs of her life in agriculture and community involvement.

Friday, March 22 was the main day of the Congrès Agro et Franco.  During the conference sessions throughout the day, 12 different speakers are conducting sessions ranging on a variety of topics related to agricultural business, science and technology.

The keynote speaker during the first session on Friday morning was Pierette Desrosiers, a psychologist and coach from St-Herménégilde Québec who specializes in working with farm and small-business people.